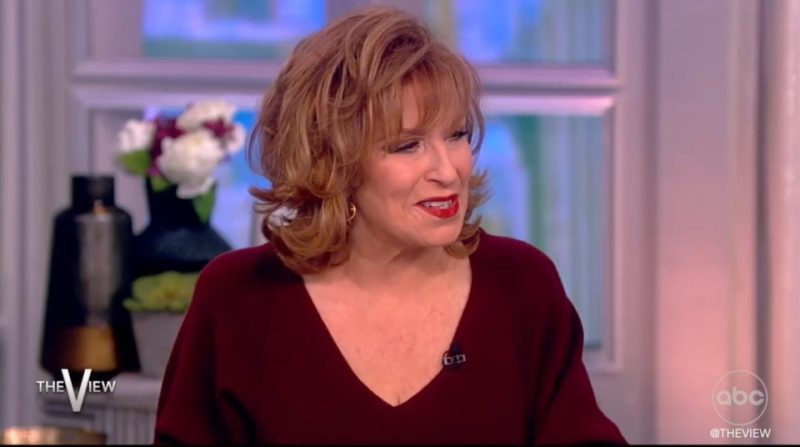 JOY Behar has been chewed out by fans of The View for calling A-list guest Kristin Chenoweth a “rude” nickname live on air.

The View’s hosts took the time out on Thursday to interview actress and broadway star Kristin Chenoweth.

Kristin is rather short and petite, standing at just 4-foot-1, which makes her quite small compared to the rest of the cast.

It seems Joy had this in mind when chatting with the guest.

First, Joy made a comment early on during Kristin’s appearance on the show that the staff could have “raised the seat a little” for her.

The hosts chatted with Kristin about a variety of topics before going to close the segment with a big question.

“We hear you’re working on a new Broadway show,” one host eventually said to Kristin. “Can you tell us anything about that?”

Kristin took a beat before replying: “It’s gonna be good.”

Then, Joy commented: “Well, we love having you. You’re a little girl with a big voice and a big heart.”

While an innocuous comment that encapsulated Kristin’s small frame and body with an incredible voice, some fans took offense at her remark.

One fan blasted Joy for the remark: “Little girl? No Joy she’s a grown woman. I didn’t care for that remark from Joy. #Theview”

Another pointed out it was likely due to Kristin’s voice: “Joy calling Kristen a lil’ girl! It’s probably the voice! #theview”

Joy had a bit of fun last week, where the boots she wore on set attracted the attention of both The View hosts and audience members alike.

She’s been wearing a pair of fashionable Gucci boots each day of the show, and fans have wanted an up-close-and-personal look each time.

Viewers at home quickly noticed Joy’s sexy footwear when she first walked out on set at the start of the show.

Some begged on social media for her to give them a better look at the shoes.

Much to their excitement, The View host decided to do just that later on in the broadcast.

“Look at these boots!” she said excitedly as she used her hands on the table to give her some momentum to lift one leg up and throw her foot on the table.

Earlier this week, Joy got decidedly more grim during a recent discussion with her co-hosts on The View.

When The View came back from break, Joy had some intriguing funeral news to share: “A woman in the UK had her dying wish fulfilled at her funeral when a flash mob of dancers performed a surprise rendition of Queen’s classic song Another One Bites The Dust.

Laughter rang throughout the stage as a clip of the moment was shown with four female dancers busting some moves inside what appeared to be a church.

Joy looked baffled as the show returned to the studio and announced to her co-hosts: “I don’t know… I would just like to have my ashes sprinkled over Liam Neeson, and that would be enough for me!”

“Would you guys wanna go out like that?” she then asked, as Sara replied: “I think that’s amazing, it’s clearly a celebration of life.”

“That was pretty hard to watch,” Sunny chimed in as Ana revealed what she thought she would want.

“I want a drag show and I want them to play Gloria Gaynor’s song I Will Survive but change the lyrics to ‘I didn’t survive,’” Ana admitted as everyone laughed.

Sunny then said: “I agree you don’t want it to be sad, but I’m a little uncomfortable watching the dancers under the cross, the repressed Catholic in me… I feel very dirty.”

Alyssa agreed and added: “I liked it better in theory until I saw the video.”

Though Joy was likely referring to Kristin’s stature and petite physique, fans were immediately upset with the remarkABCThey took to social media to air their complaints about Joy calling the star a ‘little girl’ABCThe hosts all seemed to be in good spirits despite what many viewed as a dissABC