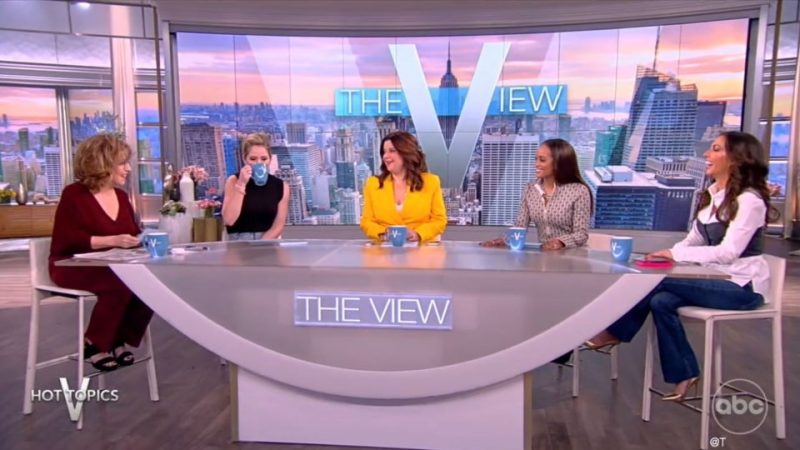 THE View fans were left furious on Thursday as the show was abruptly cut off.

The popular talk ABC show was interrupted for a special bulletin announcing that Alec Baldwin has been charged with involuntary manslaughter for the Rust set shooting.

On Thursday’s episode of The View, Hot Topics got off to a feisty start as the women slammed Rep. George Santos.

But just minutes into the show, the debate was abruptly cut off by an ABC News Special Report.

The bulletin delivered the breaking news that Alec Baldwin has been charged with two counts of involuntary manslaughter for shooting and killing cinematographer Halyna Hutchins.

Alec was rehearsing a scene with a prop gun during the production of Rust in October 2021 when it went off with a live round.

But many of The View’s fans were not happy to see their favorite show disrupted by the breaking news.

“I tuned in for The View not Alex Baldwin. Dang! What’s with ABC? Get off our show,” wrote one on Twitter.

“ABC, this could have waited!” another agreed.

A Hot Topics fan complained: “Thanks to ABC News, we missed the best of The View!”

Another asked: “Why are they preempting things for celeb news?”

Others were furious to see that after the bulletin, the network showed commercials instead going straight back to the show.

As a result, East Coast viewers missed out on the rest of the Hot Topics discussion about Rep. George Santos.

“How do we find out what we missed?” asked a disappointed fan.

Another pointed out: “Other talk shows have replays. Not The View. What an annoyance!”

The sudden interruption wasn’t the only complaint fans had about Thursday’s show.

Many were unhappy to see The Bachelorette’s Rachel Lindsay stepping in for Whoopi Goldberg and Sunny Hostin.

At the start of the program, Joy Behar, who took over as the moderator, announced that both regular co-hosts were off.

However, she did not reveal the reason behind either of the absences.

One upset fan tweeted: “No Sunny and no Whoopi today?!”

Another insisted they were turning off the show “without Whoopi and Sunny.”