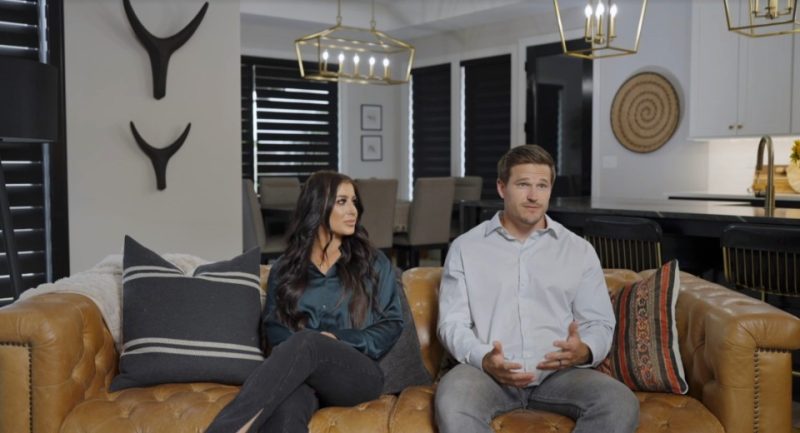 Chelsea, 31, and Cole’s new show Down Home Fab premiered on Monday night on HGTV after they quit Teen Mom in 2020.

The U.S. Sun can exclusively reveal the January 16 debut episode brought in 678,000 viewers.

The numbers are low compared to the similar HGTV show Fixer to Fabulous.

The premiere episode featured the partners using their decorating expertise to remodel several rooms in the nearby home of another Sioux Falls couple, Jessica and Nate.

With a budget of $100,000, they transformed their client’s kitchen, dining room, living room, seating area, and foyer, giving it a similar flare to Chelsea and Cole’s South Dakota farmhouse.

Some design choices included butcher block countertops for the kitchen, painting the original off-white cabinets black, and cooper wrap for the kitchen island.

For the sitting room, Chelsea used peel-and-stick black alligator print wallpaper for the accent wall, antelope print for the carpeting, and yellow chairs.

As for the living room, they painted the fireplace stone with whitewash and painted the wood ceiling a green color.

Though the clients seemed thrilled by the remodel, viewers on social media weren’t as impressed.

One said: “It was actually embarrassing how bad this went, they have 0 sense of style the house looked awful when they were done with it.”

A second agreed: “It looks horrible! Also, Chels kept saying the room was too dark, then proceeded to put down dark floors, and paint the walls AND ceilings dark green.”

A third wrote: “The whole design seemed to hang together except for that horrendous fireplace. Maybe it was different in person but it seemed like a gigantic white-ish blob amidst earth tones and black. Just awful. Also, would’ve 100% left the ceiling unpainted.”

Others thought the designs were “hideous,” harshly calling the entire project “a huge waste of money.”

But Chelsea and Cole were very proud of their work and celebrated their return to television at a premiere party on Monday.

The former Teen Mom 2 star shared photos on social media from the evening, in which she donned a skintight red dress with long sleeves that showed off her cleavage, paired with black cowgirl boots.

She completed the look by sporting her long dark locks straight down.

Cole went for a button-down with slacks, and her daughter Aubree, 13, whom she shares with ex-boyfriend Adam Lind, looked all grown up in a black dress with combat boots.

New episodes of Down Home Fab air at 9pm EST Mondays on HGTV and are also available on Discovery+.