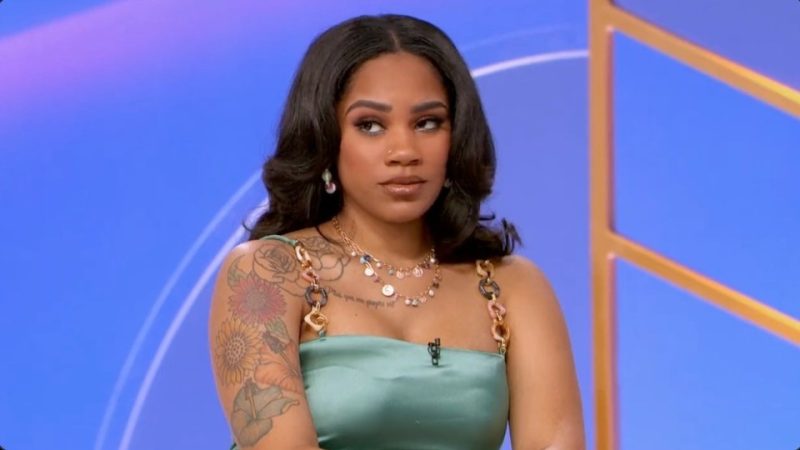 Ashley, 25, took to Instagram and accused Cheyenne, 30, of using an accident as the reason why she had plastic surgery.

A popular Teen Mom Instagram fan page shared the comment which read: “Tell the people how you tried to cover up the new body with an accident and stop talking about me.

“I MARRIED MY FIRST CHOICE BABES and I am over you and this freaking storyline,” Ashley added.

The caption alongside the screenshot on the fan page read: “New Day, Same #AshleySiren several people sent in Ashley in the comments of another #TeenMom fan page, on a post about Cheyenne talking about why she uninvited Ashley from her wedding – mocking #CheyenneFloyd for her trauma (and low key bashing her for #CoryWharton not wanting to be in a relationship with her).

“My problem is #BrianaDejesus was wrong to question Tea’s trauma but fans seemingly encourage Ashley questioning Chey’s,” it finished.

One fan quickly shared the post on Reddit and said: “Ashley dragging Cheyenne about getting her body done and settling for Zach… what y’all think? Too harsh?”

Ashley’s comments left others divided as they began to comment on the thread.

“I want to like Ashley, but she needs to STFU about all the other girls. I get the feeling she’s always had to fight, so that’s all she knows,” one person wrote.

Another said: “Always on the defense,” while a third asked: “Why is she so insistent on starting sh*t with everyone?? Girl, relax.”

A fourth person commented: “Okay I agree with her points about Cheyenne but I think Ashley settled for her high school boyfriend instead of leaving when it got toxic. That’s not marrying your first choice.”

Referring again to Ashley’s husband Bar Smith, someone else wrote: “I don’t think Ashley has room to talk about settling when she is with Bar, of all people.”

Another Reddit user mocked: “Imagine being proud of having such bad taste in men you stay with your first choice no matter how bad of a choice it was.”

Half defending Ashley, a different person claimed: “I mean it’s harsh but she’s not wrong.”

In October last year, Cheyenne came clean regarding her plastic surgeries amid speculation that she secretly had a Brazilian butt lift.

The Teen Mom OG star was previously involved in a car accident that damaged her breast implants.

Cheyenne opened up about her procedures during a Q&A on Instagram.

The reality star took to the platform last October to allow fans to ask questions regarding her life.

The TV personality was surprised when many were curious about her past plastic surgeries.

“How long after the accident did you have surgery? And why did you go through pain for so long?” one asked.

Cheyenne replied: “A year after….and I think I put the pain somewhere else in my head… It didn’t feel like a priority at the time.”

Another fan asked: “When you got the surgery did they add implants back in? What size are they?”

“Yes I have implants and a fat transfer to even out all the scar tissue that was taken out…” she answered.

“@drghavami did my first boob job and I was IN LOVE and he did my second fixing them after the accident and I haven’t felt this confidence in forever.”

Then one fan asked: “When did you get a bbl?” to which Cheyenne replied: “I didn’t get a BBL…I had my boobs fixed and took fat from my back, tummy, and love handles to fix them.

“I’ve always had a butt it was just hiding with all the other flubber,” she explained.

Last September, Cheyenne revealed that she was shot at 13 times while driving with her two kids, Ryder, five, and Ace, one.

In addition to her suffering from PTSD due to the incident, Cheyenne also experienced physical damage to her breast implants due to the shooting.

“So this boob is like dented at the bottom where there was a really big bruise,” she explained in an episode of Teen Mom: The Next Chapter.

“But this one the muscle collapsed so it pushed my implant up here so my implant sits on top of my chest and it’s hard as a rock and it hurts so bad when I lay on my back. It, like, sticks out.”

But Cheyenne expressed concerns about undergoing more surgery, saying: “I just feel like I’m scared that if I go under, am I going to wake up?”

“I feel like god already gave me my second chance and what am I doing with my life? Going to get my boobs fixed?”

Cheyenne and Ashley have been involved in a bitter feud for quite some time now and it seems it might have started when the MTV star uninvited Ashley from her wedding last year and cited drama with the rest of the cast as her reason for doing so.

The mother-of-two shared the news with her nemesis through text.

After receiving fan backlash for uninviting Ashely, Cheyenne took to social media to defend herself.

Cheyenne explained her reasoning: “Everyone on the cast was invited to our wedding then we filmed TMFR two weeks before our wedding and things changed. That’s all…”