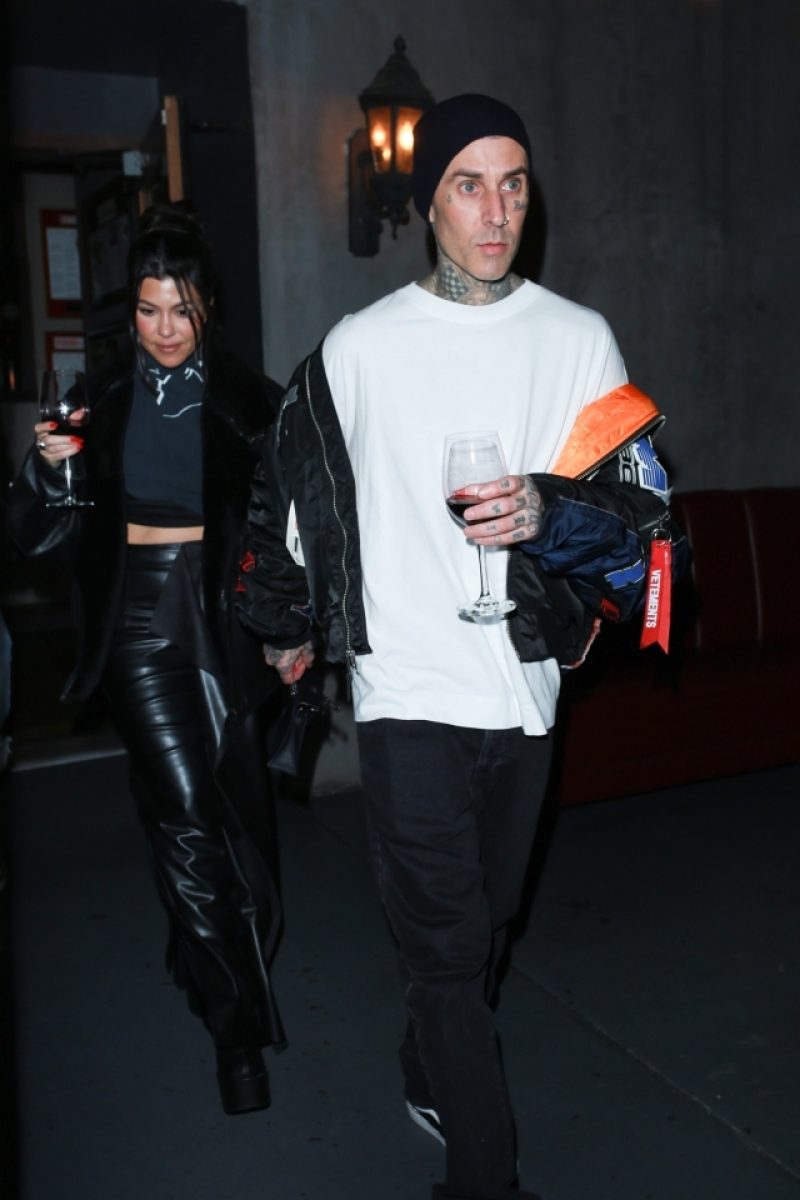 KOURTNEY Kardashian has indirectly responded to pregnancy rumors in a new photo during a recent night out.

The Hulu star was spotted out and about with her husband Travis Barker, 46, former BFF, Addison Rae, 22, and Addison’s boyfriend Omer Fedi, also 22.

BackGridKourtney Kardashian indirectly responded to rumors that she and her husband, Travis Barker, are expecting their first child during a recent night out.[/caption]

Kourtney, 43, and the rest of her crew were photographed while visiting the Beyond the Streets Bestie Boys art exhibit in Los Angeles.

The Keeping Up With the Kardashians alum donned an all-black ensemble, that included a leather jacket, matching leather pants, and a turtleneck crop top.

Her rockstar husband dressed in a comparable outfit, though he swapped out his black shirt for an all-white tee instead.

Kourtney and the Blink-182 drummer were shown nursing glasses of red wine as they made their way through the exhibit which inadvertently responded to fan speculation that the reality TV star is currently expecting.

A similar occurrence happened earlier this month when the Poosh founder seemingly answered the question regarding her possible pregnancy.

In a photo of her and Travis at their lavish Christmas Eve party, Kourtney tenderly held her tummy as she cuddled up to her rocker husband.

And in a New Year’s Eve photo of them both, many people noticed that Kourtney appeared to be hiding her stomach underneath a baggy pair of pajamas.

Kourtney and her drummer beau looked extra-comfy in the black and white silky outfit that concealed her stomach from the camera.

The decision to cover her stomach in the photos came amid rampant rumors that she could be pregnant with her fourth child.

However, Kourtney appeared to have squashed those rumors when she took to her Instagram Story and posted a picture of two glasses of red wine, a sweet treat, and a couple of candles.

She wrote alongside the photo: “red red wine + dark chocolate = lots of antioxidants.”

It’s unsure who the glasses of wine belonged to, but no doubt Kourtney’s fans will see it as a sign that she isn’t actually pregnant.

The rumors have been swirling for months now as back in November, Kourtney posed on a couch with Travis lying on her stomach in a new snap to promote her supplement brand, Lemme.

Kourtney wore a light purple slip with lace trim in the photo, while Travis went shirtless and opted for black jeans.

The drummer had his eyes closed as he rested his head on the Poosh founder’s stomach.

Kourtney placed her hands on Travis’ head and gazed serenely at the camera.

The photo was shared in an online thread, and fans immediately speculated that the couple was hinting that they were expecting a child.

One wrote: “I thought this was a pregnancy announcement,” while another added in a since-deleted comment: “Yes it really looks like it!”

Kourtney has been very open about her fertility struggles with Travis, having shared their struggle to conceive on her family’s Hulu reality show.

After getting married to Travis in May, she became stepmother to his teenage children – Landon, 19, and Alabama, 17 – whom he shares with ex-wife Shanna Moakler.

The two tried using in vitro fertilization (IVF) several months ago but did not conceive during their first round.

Kardashian fans might find it surprising to find Kourtney and Addison spending time together as their close friendship appeared to have ended after the KUWTK star reportedly dumped her in favor of Megan Fox, 36.

The reality star ditched the 22-year-old TikToker after Addison’s remarks about Kourtney and her family in a TV interview, a source has told The U.S. Sun.

Kourtney began getting close to the gorgeous actress after their significant others, Travis Barker and Machine Gun Kelly, became friends.

Fans had noticed her drifting apart from the much younger Addison recently, despite making an appearance alongside her in the Netflix original movie, He’s All That.

In an exclusive interview, a source close to Kourtney opened up to The Sun about the reason behind the pair’s sudden rift.

“They got close for a while, but Kourtney is upset with Addison for a couple of reasons.”

“Addison commented on Kourtney and Scott’s relationship and other family drama on Watch What Happens Live when she should have just deflected the questions.”

Addison had previously spoken about Scott and Kourtney’s relationship in an interview with Andy Cohen on Watch What Happens Live.

Earlier this month, Andy didn’t hesitate to grill Addison after several media outlets reported that Scott was single again after a split from Amelia Hamlin, 20.

When she was asked if Scott and Kourtney were “destined to be together,” the TikToker chose to respond to the question with a blunt “no!” rather than refusing to comment.

Addison also dished on how she met Kourtney, their workouts together, and getting to know the star’s billionaire little sister, Kylie Jenner, 25.