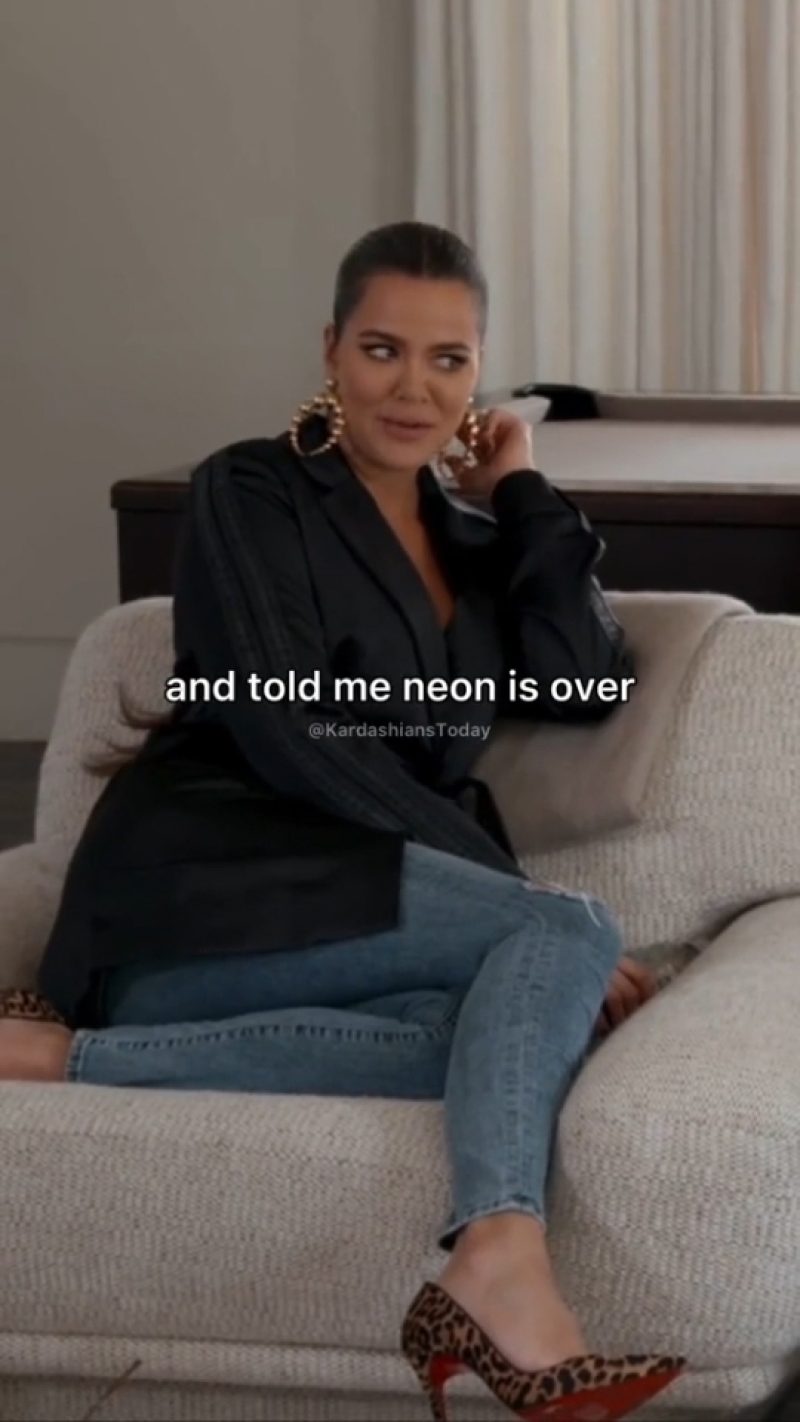 KHLOE Kardashian has shaded her sister Kim for her outfit choice in a resurfaced clip, prompting fans to weigh in in the comments.

The exchange occurred in a scene from the family’s former reality series, Keeping Up With the Kardashians.

In the clip, reshared by a TikToker, Khloe, 38, criticized her older sister’s ensemble in front of their family.

The Good American founder sat in the living room with Kim, 42, their sister, Kourtney, 43, and their mother, Kris Jenner, 67.

Khloe – sporting a black blazer, blue jeans, and leopard-print heels – the model called out Kim for her wardrobe selection.

“Remember when you went in my closet two months ago and told me neon is over and to get rid of everything neon?” she pointedly asked.

Kim defended her ensemble, saying, “This is not neon. This is coral.”

Khloe was not buying the fashion mogul’s response and fired back: “It’s orange.”

Kourtney giggled at her sisters’ banter while momager, Kris, looked on.

Kardashian fans couldn’t get over the silly debate and took to the comments section to share their thoughts.

“I feel like it’s not neon or coral it’s orange,” one person laughed.

“‘It’s orange.’ This is why Khloe is my favorite,” said another.

“I don’t know about neon, but it definitely is not coral lol,” chimed in a third.

“That’s def not neon orange lol,” someone else noted.

“It’s bright but it’s not neon… this family will always entertain me,” a fan added.

While others took Khloe’s side in the dispute, with one writing: “Kim hates being picked on but picks on literally everyone else lol.”

A second echoed: “Kim only told her that so she could start wearing neons & no one else would have any.”

Despite the disagreement, the sisters have had no problem teaming up to go against their eldest sibling, Kourtney.

Earlier this week, footage resurfaced from the E! spin-off series, Kourtney and Khloe Take the Hamptons, where Kim and Khloe mocked Kourtney for her attitude.

The video, reposted to YouTube, showed a then-pregnant Kourtney being upset with her sisters for leaving alcohol out after a boozy night.

She noted that in addition to simply making a mess, her baby daddy Scott Disick, 39, was in recovery.

“You guys can sit here and laugh about it, but it’s not funny,” she said sternly.

Khloe didn’t seem to think the situation was serious, giggling as her sister yelled.

The mom-of-two replied: “You’re gonna complain about one time? One time I decide to drink?”

Kourtney explained: “You don’t get it. It’s more than that. It’s not about making a mess. It’s about the repercussions of leaving it out.”

Kourtney replied: “Maybe. I don’t know what he’s gonna do.”

At that point, Khloe coldly hit back: “Then he should go back and get some more help.”

Khloe then shouted: “It was one mistake. All I’ve been doing this entire summer is trying to keep your family together and, like, mediate this entire situation. Do you think I want to be in this ridiculous place with you guys?”

Kourtney recently opened up about her sisters “ganging up” on her as they’ve developed a closer bond.

During an appearance on the Not Skinny But Not Fat podcast in October, the Poosh founder admitted that she’d stepped back from the pair.

“I just felt like they really bonded – like they were going through the same things,” Kourtney said, referencing Kim and Khloe each welcoming children via surrogate.

She then revealed what drove her apart from her siblings, claiming they “ganged up” on her regarding her different career goals.

“And then I felt like that’s when I was unhappy with the show – particularly because of them two kind of ganging up.

“Almost everything that Khloe and I had done to Kim, and they were kind of flipping it on me,” the Hulu star said.

Kourtney has since distanced herself from her siblings, focusing on her blended family with her husband, Travis Barker, 47.

However, the TV star has appeared at some recent events, including her niece Chicago’s Hello Kitty-themed birthday bash.

TikTok / Penelope DisickKim and Khloe teamed up against their sister Kourtney in another throwback video, where they mocked Kourtney’s attitude[/caption]

Instagram/kourtneykardashKourtney has been distancing herself from her siblings and focusing on her blended family with her husband, Travis Barker[/caption]