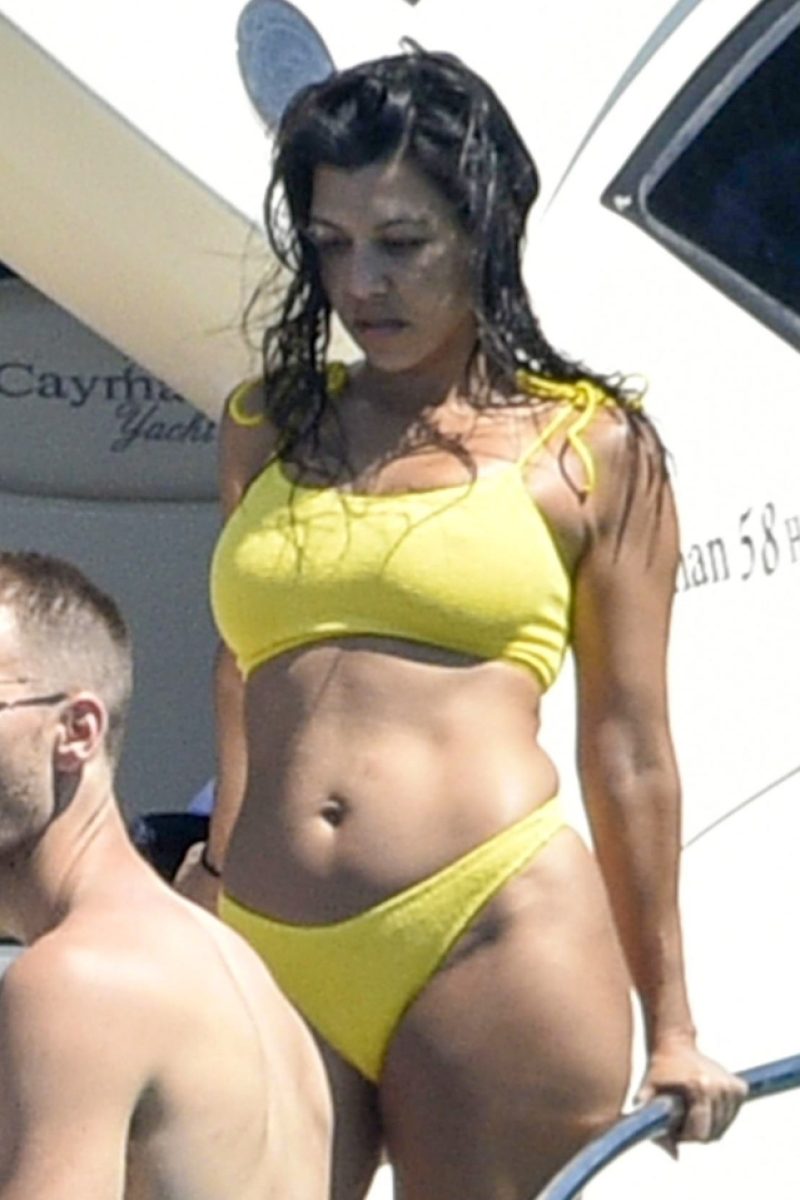 The reality star wowed in a tiny yellow bikini during a luxury yacht vacation in Corsica back in 2019.

Kourtney, who was 40 at the time, looked stunning in a scoop neck top and thong bottoms.

The photos resurfaced on Reddit on Wednesday, where fans praised the 43-year-old’s cellulite and her “amazing” body.

One wrote: “Seriously she looks absolutely amazing in the pics. I know she’s had work done but she looks incredible regardless.”

Another posted: “And (lo and behold) she’s still sexy!! That is the body of a woman who grew three entire humans inside of it!

“Who went through all sorts of trials and tribulations. She looks amazing and she has cellulite. One day I hope they can see what we see.”

A third added: “She looks great in the unedited photos. I much rather see this and have my preteen daughter see real bodies instead of all this fake crap.”

“For having 3 kids I think she looks great in the unedited photos. She’s a woman with curves and she looks healthy,” yet another user raved.

The reality star has been lauded for her positive outlook on her body image in recent months.

Back in October, the Poosh founder praised her “thick curves” and said she “cringes” over how “skinny” she was in the past.

During an episode of The Kardashians, Kourtney revealed she felt insecure after gaining weight while undergoing IVF.

While on the set of a photoshoot for Bustle magazine, she told her assistant Liz Muller and stylist Dani Michelle: “So obviously my body has changed.

“But it was all of the hormones that the doctors put me on. Eight months of IVF treatment took such a toll on me mentally and physically.

“And it’s taken a lot to get me to the place of feeling comfortable and happy with the changes.

Kourtney then talked about how her husband Travis Barker, 46, has encouraged her to have a positive attitude about her body.

“Travis always tells me every day, ‘You’re perfect,’” she confessed.

“Like if I complain about any little thing, he’s like, ‘You’re perfect, you’re so fine. You’ve never been better.’ So now I’m so into it.

“My a** is amazing. I’m so into my thicker body. I looked at photos of my body when I was so skinny and it was so cringy.”

During her confessional, the show played a slideshow of old photos of Kourtney looking slimmer.

“Not about eating or staying at a certain weight, I was in toxic relationships. I always say this but when I’m really thin, know I’m not happy.

“I also just love being curvier. It’s just channeling that queen energy and embracing the woman that I am.”

Back on the set of the shoot, Kourtney told her team: “I used to be like 95 pounds. And then 105 became my normal weight.

Viewers have seen Kourtney’s struggle to have a baby with Travis – who she married in May 2022.

The couple underwent an unsuccessful round of IVF in the first season of The Kardashians.

instagram/ kourtneykardashKourtney has praised her ‘thicker curves’ in recent months[/caption]