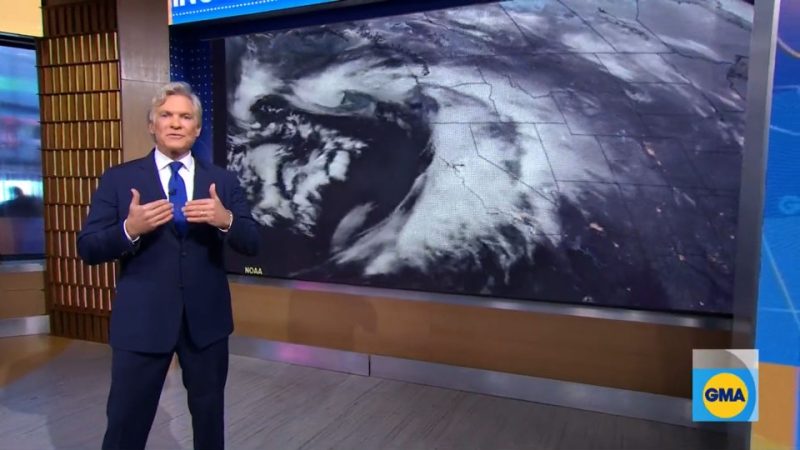 The meteorologist recently returned from his Brazilian vacation.

GMASam Champion tried to make a sports reference, to relate it to the weather forecast[/caption]

On Thursday’s show, Sam returned to report the weather.

He tried to use sports analogies to compare the two, but epically failed.

And Robin let him know that.

“Hey Robin. This is the winter that we learned what atmospheric storms really were, more than a dozen hitting the west coast so far this season,” he said.

“And normally we get only two or three in a season. So, this has been weather chaos. It has been flooding. Getting the totals out of this has just been enormous.”

Sam continued: “Look at this. 240 inches of snow in Mountain Mammoth, California. Now, how do I relate that to people who don’t live there?”

The meteorologist joked: “So, you know me. I fall back on sports analogies, as I always do.”

Robin was heard groaning off-camera and the crew started talking over each other as Sam made the analogy.

“If you took a basketball hoop, and you put two of them on top of each other-. Am I good, Robin? How am I doing right now?” he asked.

Sam continued: “-That still isn’t 240 inches of snow throughout that area.”

Robin shook her hand back and forth and laughed at his attempt.

The Dancing With The Stars alum was previously absent from GMA and Eyewitness News This Morning.

Due to his lengthy hiatus, ABC 7’s co-anchor, Heather O’Rourke, mentioned how she was “missing him” in a sweet post.

While on vacation, the 61-year-old traveled to Ipanema, Rio De Janeiro, with his husband, Rubem Robierb, 46.

Sam shared a snapshot of his toned physique on social media.

The weather anchor dropped a saucy image of himself and his partner in their speedos.

He flexed his tanned chest while rocking the red, white and black speedo.

The couple was possibly in South America to celebrate their 10th wedding anniversary.

Married since 2012, the couple usually shared with fans about their lives together.

Sam returned from his vacation earlier this week and was back in the studio on January 16.

This incident also isn’t the first time Robin has thrown shade at Sam.

The two have always had a playful banter back and forth, but it’s light-hearted, due to them being friends.

Earlier this month, Robin shaded her co-worker over a “promise he couldn’t keep.”

The shade-throwing occurred during the closing moments of the local news report with New York City’s WABC-TV co-anchor Ken Rosato, 55.

After a segment involving the Annual Polar Bear Plunge at Coney Island, Ken joked: “My New Year’s gift to everybody is that I will not appear shirtless.”

He then added: “That way you won’t get sick.”

Robin then appeared on one side of a split screen with the co-anchor as Ken emphatically announced: “Look who’s here. Good Morning America is coming up next.”

After Happy New Year wishes were exchanged, Robin quipped, in reference to Ken’s vow to keep his shirt on, “That is a promise that Sam Champion could never keep.”

She and Ken both laughed as Robin joked that, in regards to the New Year, “we’re coming in hot.”

PrevPreviousWhat is Flo Rida’s net worth?
NextTeen Mom Amber Portwood ready to quit MTV show after 14 years as she copes with losing custody of son James, 4Next