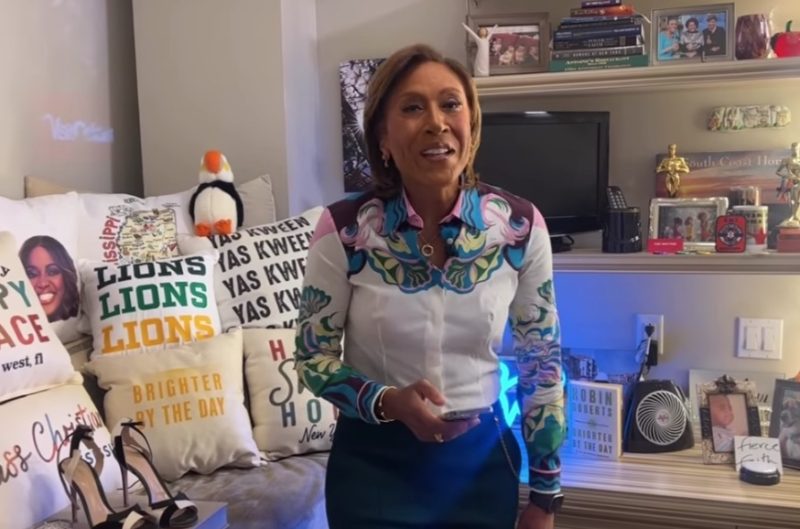 GMA fans have spotted a bizarre detail in the background of Robin Roberts’ dressing room in her new video with her “Glam Squad.”

Robin captioned her clip: “Good morning! You know #GlamFam and I always appreciate hearing what you are most grateful for on this #ThankfulThursday #HappyFridayEve”

While most fans commented about how grateful they were for Robin’s message or how happy they were to hear it, a couple had some questions about a pillow in the shot.

One asked: “is that a Sherri Shepherd pillow?”

Indeed, the video does show what appears to be a white pillow with Sherri’s face on it among others in Robin’s room.

It’s nestled among pillows with other messages on them, like “Yas Kween” and “This Is My Happy Place”, so it’s not immediately noticeable.

But the pillow stood out among the rest and prompted some puzzled reactions from those who regularly tune in to Robin’s daily videos.

Now, she has her own daytime talk show, Sherri, which airs daily on The CW.

Robin has not commented on why she has the pillow, but it could come paired with a quote like the others.

Meanwhile, Robin had some choice words for co-host Sam Champion during his Thursday morning weather report.

Sam returned to his post as GMA’s meteorologist after his Brazilian vacation earlier this week.

When he gave the weather report on Thursday morning, he tried and failed to use a sports analogy to give viewers the lowdown on the recent weather events.

“Hey Robin,” Sam said. “his is the winter that we learned what atmospheric storms really were, more than a dozen hitting the west coast so far this season,” he said.

“And normally we get only two or three in a season. So, this has been weather chaos. It has been flooding. Getting the totals out of this has just been enormous.”

Sam continued: “Look at this. 240 inches of snow in Mountain Mammoth, California. Now, how do I relate that to people who don’t live there?”

The meteorologist joked: “So, you know me. I fall back on sports analogies, as I always do.”

Robin was heard groaning off-camera, and the crew started talking over each other as Sam made the analogy.

“If you took a basketball hoop, and you put two of them on top of each other-. Am I good, Robin? How am I doing right now?” he asked.

Sam continued: “-That still isn’t 240 inches of snow throughout that area.”

Robin shook her hand back and forth and laughed at his attempt.

Robin had some uplifting words for viewers who tuned into her latest morning video on Wednesday.

“Here we are with the morning message and prayer,” she began.

“Remember what my momma would always say? ‘Everybody’s always got something.’”

Robin continued: “Well, are you letting your something, your circumstances – a medical report, a financial situation – ’cause you to live worried and stressed out?

“Why don’t you start considering your miracles? Remember the time God showed up and suddenly turned it around? Every victory he has given you wasn’t just for that time. It was so you could go back and use it as fuel to build your faith.”

The GMA host ended: “If you are low on fuel, go back and get some fuel. It is in your past victories.”

Robin then ended the video with the prayer for the day and wished everyone a blessed day.

This time, fans spotted a bizarre detail among the pillows on her couchRobin had what appeared to be a pillow with Sherri Shepherd’s face on itRobin has not commented on the Sherri pillow or why she has it in her dressing room