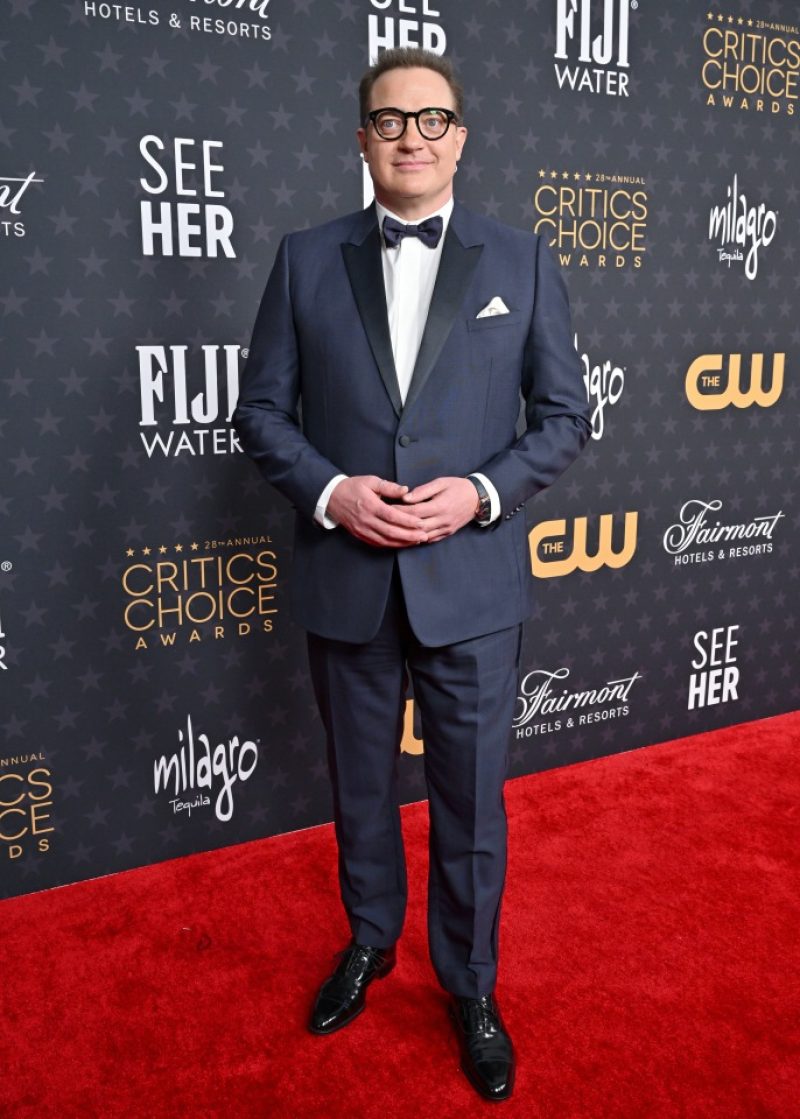 BRENDAN Fraser has landed himself a 2023 EE BAFTA nomination after pilling on seven stone for his role in The Whale.

The former Hollywood hunk, who famously played the ab-flashing lead in 1997 hit George Of the Jungle, will go up against Colin Farrell, Paul Mescal, Austin Butler in the Leading Actor category.

GettyBrendan Fraser, see here the 28th Annual Critics Choice Awards at Fairmont Century Plaza on January 15, is starting to slim down after his role[/caption]

Brendan, 54, missed out on a Best Actor Golden Globe to Austin last week and will be hoping he will have more success at the ceremony in London’s Southbank Centre on 19 February.

As well as gaining a huge amount of weight, Brenda wore a 300lb fat suit filled with marbles to take on the role as Charlie, a man trying to reconnect with his daughter after leaving his family for his gay lover.

Brendan said of the controversy surrounding his character’s weight: “It’s important to say this, because there are those who live with this disease.

“I felt empowered to be their voice and to be as honest as I could and as authentic as I could in the portrayal. Look, my weight has been all over the map.”

Of the fat suit, he added: “There was a five-point harness that had me strapped in. Once into it, I was in there all day until it came off.

“The costume pieces themselves contained combinations of those little airsoft pellets, maybe dried beans, marbles. But the rule was that the whole look should obey the laws of physics and gravity, because we don’t see that in films.”

Meanwhile, Cate Blanchett, 53, Viola Davis, 57, and Emma Thompson, 63, will battle it out for Leading Actress alongside Ana De Armas, 34, who got a nod for her role as Marilyn Monroe in Netflix’s Blonde.

Netflix’s All Quiet On The Western Front, which is based on the 1929 novel of the same name by Erich Maria Remarque, has made history after landing 14 nominations meaning it ties with 2001’s Crouching Tiger Hidden Dragon as the foreign-language film with the most nominations in EE Bafta’s history.

Colin Farrell’s The Banshees of Inisherin and Everything, Everywhere At One are closely behind with ten nominations each.

Baz Luhrmann’s Elvis, the biopic about the King of Rock N Roll, has nine nods.

Gina Prince-Bythewood is the only female nominee in the Best Director category for The Woman King.

Naomi Ackie, who plays Whitney Houston in the biopic about her life, is favourite to win the EE Rising star award.

Read more on the Bafta

She plays the iconic singer in I Wanna Dance With Somebody which has been released to rave reviews.

A panel of industry experts including actors Hayley Atwell and Joe Cole chose this year’s cohort.

Speaking to Sky after the nominations were announced, Sheila said: “Being nominated for an award is always made that much sweeter when it’s a project that you really love.

“There’s no way I would be anything without Viola (Davis), without the stunt team, the training team…

“We mesh together and that kind of individualism really kind of melted away.

“So for me, I’m just excited to be able to talk about the Woman King through this award as well.”

All Quiet on the Western Front  – 14 nominations

The Banshees of Inisherin  – 10 nominations

Everything Everywhere All At Once  -10 nominations

Best Actress in a Leading Role

Michelle Yeoh – Everything, Everywhere All At Once

Best Actress in a Supporting Role

Kerry Condon – The Banshees of Inisherin

Jamie Lee Curtis – Everything Everywhere All At Once

Best Actor in a Leading Role

Colin Farrell – The Banshees of Inisherin

Best Actor in a Supporting role

Brendan Gleeson –  The Banshees of Inisherin

Ke Huy Quan –  Everything Everywhere All At Once

Albertch Chuc – All Quiet on the

All Quiet on the Western Front

The Banshees of Inisherin

Everything Everywhere All At Once

The Banshees of Inisherin

Good Luck To You, Leo Grande

See How They Run

All the Beauty and the Bloodshed

Edward Berger, All Quiet On The Western Front
Martin McDonagh, The Banshees Of Inisherin
Park Chan-Wook, Decision To Leave
Daniel Kwan, Daniel Scheinert, Everything Everywhere All At Once
Todd Field, Tár
Gina Prince-Bythewood, The Woman King

GettySheila Atim, Darryl McCormack and Naomi Ackie have all been nominated for an EE BAFTA Rising Star award[/caption]

Alison Hammond will host a special backstage section of at the 2023 BAFTASRexPARichard E. Grant will host the main 2023 EE BAFTA ceremony[/caption]