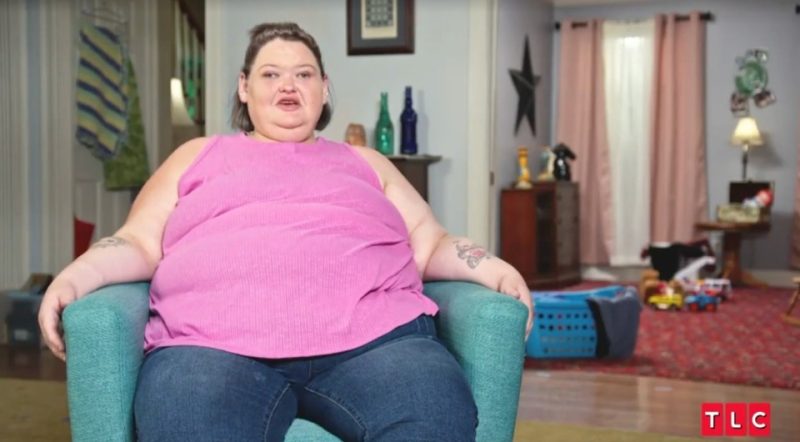 The season premiere of the TLC show on Tuesday gave fans new insights about Amy’s pregnancy with her son Glenn, who was born July 2022.

During the premiere episode, Amy discussed how she knew she was expecting another child following the birth of her first son Gage in 2020.

She recalled experiencing extreme constipation during her first pregnancy.

“I found out I was pregnant with Gage because I went to the ER because I was so constipated,” said Amy in a confessional.

A flashback scene then showed how the 1000-lb Sisters star complained to her husband Michael Halterman: “My back is really hurting and I can’t poop.”

Amy revealed that with her second pregnancy, she experienced the same issue.

“With this one, it was like, ‘Babe, I haven’t pooped in three weeks,’” she explained.

But as the scene was shared on social media, many viewers were left grossed-out by the detail from Amy.

A third shared: “I’ve known a lot of pregnant women and I have been one myself. Never heard of this symptom. Yikes.”

Amy gave birth to Glenn July 5th 2022 via a C-section, she revealed exclusively to PEOPLE.

Although she told the outlet the “delivery was a huge success”, her pregnancy was not without its difficulties.

A trailer for the new season has shown how she was rushed to hospital while carrying her child.

“Things took a turn for the worst,” said Amy, cryptically.

Luckily, fans know the story has a happy ending as the mom-of-two has shared plenty of photos on social media of Glenn, who recently turned six months old.

“This boy is so smart, he hit every milestone and some,” she gushed in the caption of her latest update.

Fans can catch up with more from Amy and her sister Tammy as new episodes of 1000-lb Sisters air Tuesdays on TLC at 9/8c.