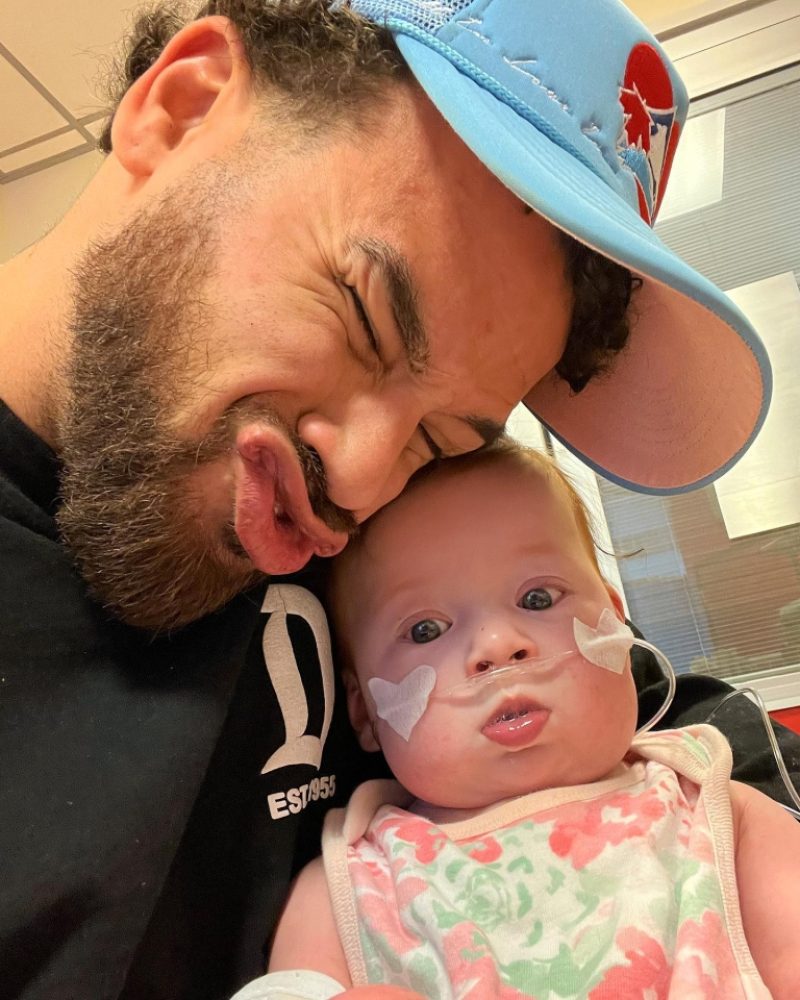 The baby was born with a heart condition and has gone in for several procedures since her birth.

The MTV star took to his Instagram feed on Wednesday to share “some GOOD news” with his followers.

He posted photos of himself and Maya, who appeared to have an oxygen tube in her nose.

Cory, 31, revealed: “I have some GOOD news to tell you all WE finally got released from the hospital.

“I’m so thankful these past two weeks have been very up-and-down and have felt like a nightmare at times. But I always try to stay positive and being at the Children’s Hospital for two weeks & seeing some families who have been up there for months or years and some maybe won’t leave the hospital.”

He went on: “I’m very thankful that we got released today. Maya had a successful Glenn procedure! But during recovery, Maya had other plans. Maya’s oxygen levels were lower than the doctors wanted it to be.

“6 days after her Glenn she ended up back in the operating room for a Cath lab procedure to hopefully fix what they thought was the problem.”

The Teen Mom dad continued: “It turned out that there was nothing to fix, which was great but it didn’t fully explain the oxygen levels being so low. Trying to get her off the ventilator the second time around was a lot harder.

“After this roller coaster ride of emotions, I’m just happy & thankful to be home. Again just want to say thank you to everyone who supported us and prayed for us during this time, sorry if I didn’t get back to your messages, I was a little stressed out.”

Cory concluded his message with: “Love you all. What doesn’t kill you makes you stronger, and that’s what this did.”

The post was accompanied by several snaps of the father-daughter duo.

The first pic showed them enjoying some time outside, with Maya smiling while wearing a polka dot outfit and pink headband.

Cory was looking lovingly at his daughter in the pic.

Another snap snowed them in the hospital.

Both the reality star and his infant daughter were looking directly into the camera with serious looks on their faces.

Maya had an oxygen tube in her nose and a pacifier in her mouth.

A third pic showed Cory pulling a silly face while he rested his head on his daughter.

Maya appeared to have her cheeks puffed out slightly.

Another snap showed the baby girl on her own in what looked like a hospital bed.

She smiled up at the camera, snuggling a fuzzy blanket with various tubes hooked up to her.

Cory also shared a photo of her from after one of her procedures.

She was seen laying asleep with tubes coming from her nose and arms and other equipment hooked up to her head.

In another photo, Maya cuddled with a stuffed animal as she lay in bed.

A similar snap showed her smiling as she held a smaller fuzzy friend to her chest.

Cory cradled his smiling baby girl in another photo in the batch.

She had on a purple outfit and a yellow bib.

The tot appeared to be in good spirits despite the situation.

The MTV star gave fans a look at Maya’s incision in one of his photos, posing with his tongue out as he cuddled close to his smiling baby.

In a final photo, Cory pinched her cheeks as she lay in her bed recovering.

She told fans online that she was “traumatized” by the whole experience.

The ex-MTV star shared one clip that showed Maya laying in bed wearing a diaper as she kicked her legs and played with a light-up toy, with several tubes attached to her face and body.

Taylor captioned the short clip: “Still here. Maya had other plans for her recovery but she’s doing well now.

“Cory and I are traumatized but it’s fine. I’ll update on everything when we get out of here,” she added.

The second post was a close-up photo of Maya’s face with her mouth slightly open as Taylor confirmed: “Maya got her first tooth during this stay,” followed by a laughing face emoji.

A third post was another sweet clip of Maya in her hospital bed, surrounded by cuddly toys and grinning at her famous mom.

The song ME! by Taylor Swift was playing over the top and it was captioned: “I told her if she would just stop setting off her alarms we could go home.”

Fans had been concerned about Taylor and Cory the week prior, noting that they had been radio silent on social media after revealing that Maya was going in for the operation.

One took to Reddit to discuss Cory‘s disappearance, writing: “Has anyone seen an update on Taylor and Cory’s baby Maya?

“She had surgery a few days ago and they posted that she had some complications and I haven’t seen anything since then.

“Their stories don’t always pop up on my Instagram so maybe I missed something. Hoping she’s okay,” they closed.

“A few days after they posted that she was trending upwards and no longer on the ventilator, Cory posted as follows ‘I will have an update for you all later, right now i will just tell you that Maya is a fighter and things don’t always go as planned but we’re going to continue to pray. Keep trying to make steps forward,’” a second mentioned.

“Since then Cory and Taylor have been silent. I pray and hope Maya is okay.”

“I hope they are just spending time together as a family and that Maya is doing well,” wrote a third.

“I have been wondering too. It has been a couple of days with no updates. I hope everything is ok!” a fourth agreed.

Maya, who has coronary heart disease, had surgery earlier on this month.

The Teen Mom star previously opened up to his fans about Maya’s health condition online when she turned three months old.

He divulged their little girl’s official diagnosis, revealing that she has tricuspid atresia.

According to the Centers for Disease Control and Prevention, tricuspid Artesia is a heart birth defect where the valve controls the blood flow.