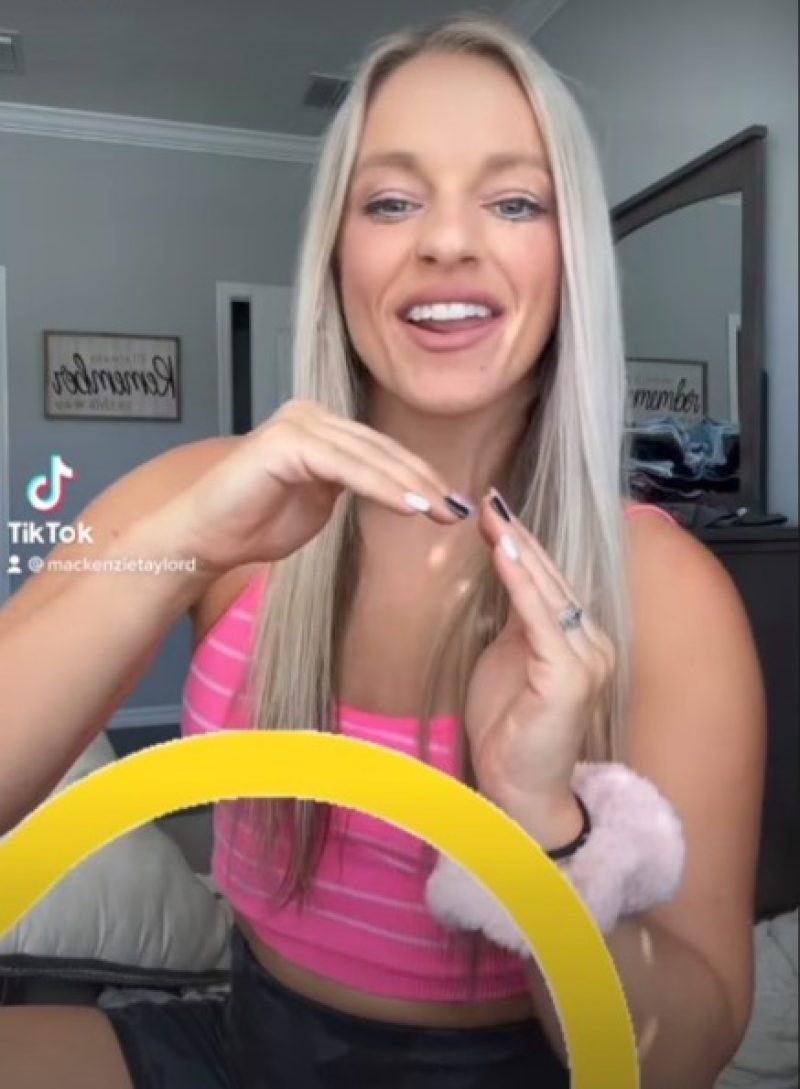 TEEN Mom star Mackenzie McKee has shown off her abs in a crop top while posing in a video shot in her messy bedroom.

The MTV alum shared a TikTok of herself making a heart with her arms and hands while seated on the floor of her room.

In the video, posted to her TikTok and Instagram Story, the star was seen sporting a bright pink bra top with white stripes.

The top reached just above her belly button, showing her flat stomach and abs.

She also had on tight black biker shorts in the clip.

Mackenzie wore her blonde hair straight down, hanging loose around her shoulders.

She smiled big, showing her plumped-up pout and white teeth to the camera.

Behind her, laundry that had been folded but not put away could be seen.

There also appeared to be bits of bedding or towels on the floor.

Mackenzie has been showing off her home and family online.

She recently shared a silly video of herself and her three kids – Gannon, Jaxie, and Broncs – dancing together to Move Shake Drop.

The young TV personality was seen twerking in several frames of the video.

He wasn’t the only one putting his best moves out there, however.

The rest of the family did handstands, fist pumps, and were spotted leaping in the air as they waved their arms and shook their hips.

One person commented: “Wow,” in response to the uninhibited dancing while other fans’ reactions were generally positive.

Taking a cue from the dancing, another person stated: “I’m glad your family is doing well.”

“lmao, this is epic,” added a fourth.

While a fifth commenter wrote: “This is what happiness looks like.”

Others were focused more on how much Mackenzie’s children have grown up since she parted ways with Teen Mom.

One fan commented: “They are getting so big!!” while another added: “Gannon is going to be taller than you soon!”

Amid the sweet family moments, Mackenzie also often shows off her figure.

The star has always worked out hard and she’s got the muscles to show for it.

She frequently flaunts her toned stomach and arms online.

Most recently, Mackenzie gave fans a glimpse at her body while wearing tight leggings and a crop top.

The pictures were part of a photo dump shared on her Instagram Feed from one of her Body by Mac training sessions.

It appeared that the TV personality held her workout class in Sarasota, Florida.

In each of the images, the mother-of-three looked joyful as she led her fitness class participants, smiling and making big arm gestures to help encourage her trainees.

Mackenzie captioned her Body by Mac photo slide-show: “When I see you hit that 1 minute plank, I celebrate for you ! [strong arm emojis].”

Some fans gained motivation from the 16 and Pregnant alum’s post and cheered her on to “keep it up.”

One fan expressed: “Ugh I wish I was in Sarasota to take your class [sad face emoji], and a second praised: “So proud of you keep it up!”

Other fans just raved about how they “loved” Mackenzie’s fitness teachings and thought she was “amazing.”