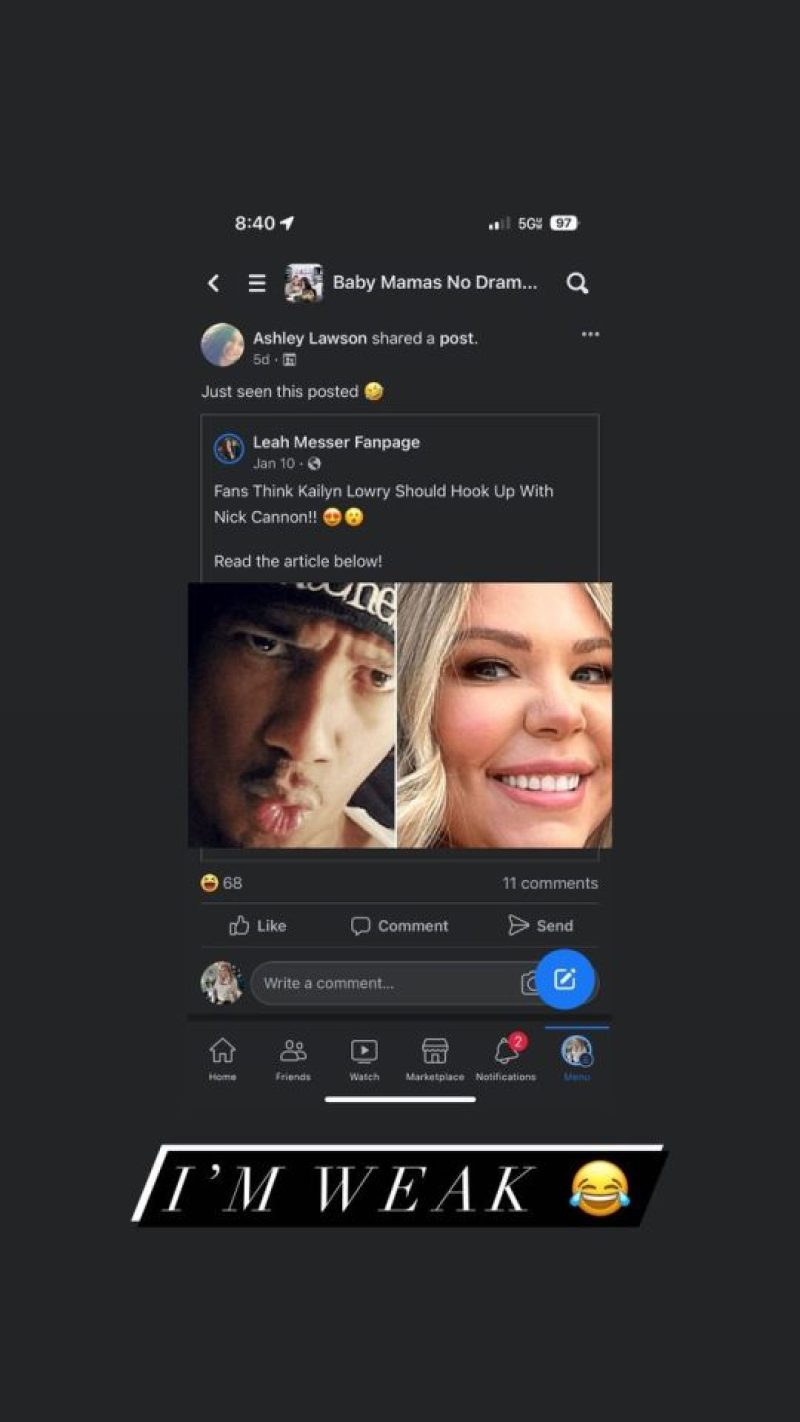 KAILYN Lowry has responded to fan pleas that she should hook up with a popular A-lister in a funny new post.

The Teen Mom 2 alum has been with her current boyfriend Elijah Scott since April.

But fans have suggested that Kailyn, 30, try her luck with Nick Cannon, 42, who currently has 12 children with six different baby mamas.

The MTV star has four sons of her own with three different fathers, and many believe she secretly welcomed a fifth baby with Elijah.

The snap showed a photo of Nick twinned with one of Kailyn with the caption: “Fans think Kailyn Lowry should hook up with Nick Cannon!!”

The reality star was obviously tickled by the suggestion, writing: “I’m weak” with a laughing emoji in response.

Earlier this month, Kailyn shocked fans by asking her boyfriend, Elijah Scott if he plans to propose.

The surprising exchange happened on an installment of her Barely Famous podcast.

During the episode, Kailyn invited Elijah as her guest, and she grilled her beau on his ideas for their future.

After asking the 24-year-old to come clean about his past relationships, the topic quickly turned to wedding bells.

Kailyn questioned Elijah on what would make him not want to propose to a partner.

Elijah revealed that constant bickering would be a dealbreaker for him in committing further to a relationship.

Kailyn then focused on their 8-month-long romance, wondering if he had considered getting engaged to her.

“So, thoughts on proposing?… [Are] you gonna propose to me? Because we don’t argue,” she asked, relating to his previous answer.

Seemingly nervous about Elijah’s response, Kailyn laughed off her question before waiting for a reply.

“I’m just kidding because you said it depends on how much we argue,” she teased.

However, Elijah admitted that the idea had crossed his mind about popping the question to the ex-Teen Mom 2 star.

“Yeah, I thought about it,” he confessed.

Kailyn and Elijah supposedly began dating in April of last year while being next-door neighbors.

Earlier in the podcast episode, Kailyn commented that their relationship wasn’t exactly planned.

Elijah cracked up, replying: “You were thinking that!”

Despite the sweet banter, listeners weren’t convinced that the couple was in it for the long haul.

One fan slammed: “Kail, honey it’s like you were having a conversation with one of your children… a hard listen to say the least.”

She responded directly to the aforementioned commenter defending her lover and clapping back at other fans that left harsh notes.

“He is young, I get it. But keep in mind he isn’t part of a public lifestyle so this is new, [a] podcast may be weird for him,” Kailyn wrote.

“He wanted to support me in a podcast so he agreed, but he really is a man of very few words in general.”

All this comes as rumors swirl that Kailyn gave birth to her fifth child, her first with Elijah.

PrevPreviousWho is David Fishwick and what is his net worth?
NextThe View hosts throw major shade at Sunny Hostin ‘personality’ as they grill host’s mom about herNext