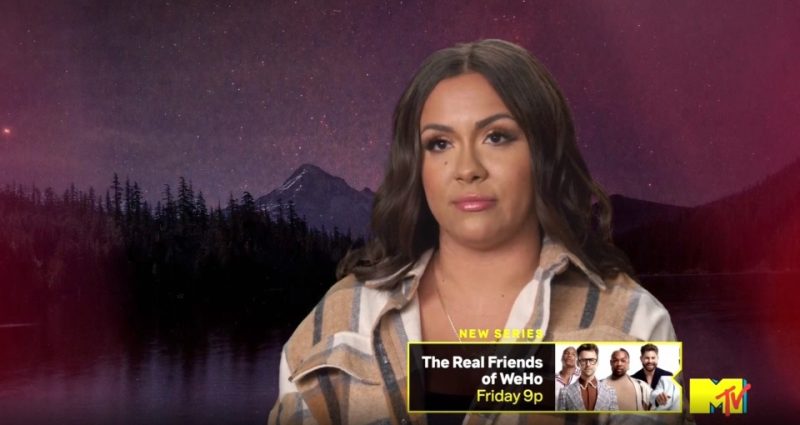 TEEN Mom Briana DeJesus has fans outraged after she claimed she acted “mature” during a nasty fight on the latest episode.

The brawl broke out between Briana and her co-star Ashley Jones during Tuesday night’s episode of Teen Mom: Family Reunion.

In the scene, the girls got into a screaming match that turned physical while defending their mothers Roxanne and Tea.

It all began when Tea accused Roxanne of being “disrespectful” after she bumped into her.

Their daughters then got involved, escalating the dispute.

Briana stood on the counter and began yelling at Ashley while the other castmates encouraged the mom of two to get down.

“You can’t fight. Get down. Come down, baby,” Ashley said to her co-star.

Ashley, 25, addressed Briana in her confessional interview, saying: “B***h you’re trash. You’re beneath trash. That’s really how I feel about you, and now I’m going to show you that.”

Ashley then spat in Briana’s face, prompting the Teen Mom 2 star to jump off the counter and lunge at her.

Later in the episode, Briana reflected on her growth, commenting on how “mature” she thought she acted in the situation.

“I think last year I learned a lesson. I had to leave and get put up in a different hotel,” the 28-year-old explained.

“I came here with my mother and I really wanted my mom and me to experience this whole thing, and I wasn’t gonna let anybody stop that from happening, and I think I was mature enough not to get super escalated.”

MTV producers ended up ordering Briana, Ashley, and their mothers to leave the premises due to their behavior.

While the episode aired, Briana took to Twitter to address her actions and defend her mother for “standing up for the kids.”

In a second tweet, Briana responded to a viewer’s take on what happened between Roxanne and Tea that started the incident.

Briana supported her mother, replying: “She tried to move out the way even tho my mom was there first [insert laughing face emoji] I didn’t hear an excuse me from them when they tried to get into the wine cooler but maybe I’m delusional lmao.”

“If 4 moms (roxy, tiff, christy, and jamie) had an issue with Tea about the same thing…. I don’t think it was wrong of my mom to speak her mind. My mom was standing up for all the kids in the situation,” Briana said, mentioning her co-stars Jade Cline, Kiaya Elliott, and Kayla Sessler‘s mothers.

However, not all fans were in Briana’s corner, with one tweeting: “You are a Bully and so is your mother.”

The reality star clapped back at the troll, replying: “If you wanna swap spit the right way you know where to find me [insert pink heart emojis].”

Others disagreed with how Briana handled the encounter and voiced their opinions in an online thread.

“Wait that’s what Bri calls not saying anything ? Her whole a** self was jumping on the counter,” one said, referencing her tweets.

“Bri and her mom are just really unintelligent, out of touch with reality and love to lie like weirdos,” another wrote.

“She really was quiet most of the time,” a third person mocked.

“When she says ‘kids’ I’m assuming she’s talking about the 30+ years old cast of ‘teen moms.’

“Yeah I’m sure your mom really needed to stand up for the ‘kids’ in this situation,” a fourth joked.

The fight between Roxanne and Tea had been brewing as earlier in the episode, the reality TV grandmothers got into another heated battle.

MTVIt all started when Briana’s mom, Roxanne got into an argument with Ashley’s mother, Tea[/caption]

MTVThings escalated when Briana and Ashley got involved, defending their mothers[/caption]

PrevPreviousLove Island fans horrified as bombshell ‘goes missing’ without even being seen in the villa
NextWho is Mavis Ackerley?Next