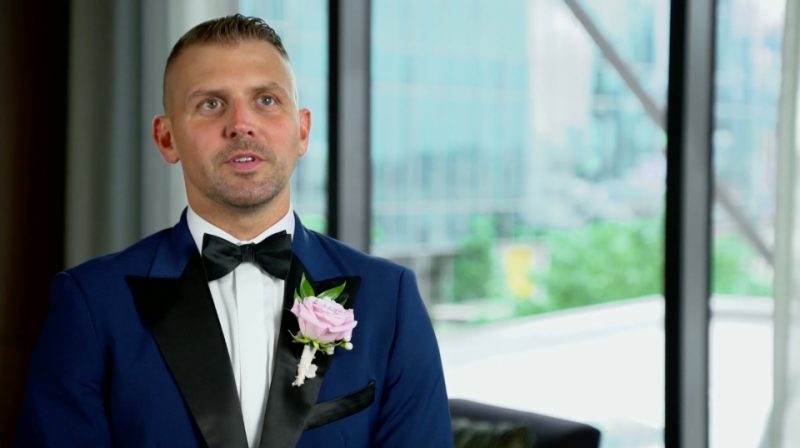 MARRIED at First Sight star Mackinley Gilbert has expressed his fears about marrying Domynique Kloss, as he worries she “will not have a job” because of her “younger age.”

The U.S. Sun can reveal an exclusive clip where Mac, 33, says he just moved to Nashville and is living with his best friend’s parents as he begins his married life with Dom, 25.

In the exclusive clip, Mac sits down with his groomsman party including Mitch, Tony and Taylor.

Ahead of the wedding ceremony, Taylor asked Mac: “What kind of partner are you looking for?”

Mac answered: “You know, obviously someone funny, genuine, career-oriented, past relationships updated – you know, the younger women who don’t really have jobs…”

After dropping out of college and living with his mom, the MAFS groom and Michigan native began his own cannabis company Maverick CBD, which launched in 2019.

Dom is a real estate agent in Nashville and appears to have graduated from The University of Tennessee Southern.

Taylor then continued to press: “Are you scared she’s going to have any reservations that you just got here, you’re not totally settled, don’t have roots?”

Mac replied: “I moved into your parents’ house – obviously, ‘where do you live?’

In a confessional, the MAFS groom continued: “I just moved down to Nashville – I was literally just at home having a hard time with my mom talking about I need to find love and settle down.

“I said I wanna go to Tennessee, I’m fortunate to know Taylor’s parents – they offered to let me stay for as long as I needed.”

Mac clarified: “So me moving down to Nashville, looking for love, it’s really taking a risk but I’m where I want to be and where I’m striving to be and all I’m missing is my wife.”

Fans are already concerned for Mac and Dom’s future as they feel their age gap is already bringing too many complications to the relationship.

Dom admitted she did not willingly sign up for the show.

Her mother sent in the application for MAFS Season 16, although it was ultimately Dom’s choice to follow through with it.

However, fans are wondering if Dom is truly yet mature enough for a real relationship, despite calling herself an “old soul.”

Already in the first episode, fans slammed Dom for flirting with one of the male dancers on set.

Mac and Dom join four other Nashville couples for season 16.

Jasmine, 31, is looking for a partner she can grow old with. She wants to find long-lasting love and settle down and start a family.

Her match Airris, 39, wants a strong, independent woman by his side.

He currently lives in Tennessee and works as a software engineer instructor.

He is looking forward to starting a family with his new wife.

Nicole, 32, lived in New York City for 30 years before moving to Nashville for some fresh air.

She is ready to find true love away from the toxicity of New York.

Her husband-to-be Christopher, 36, lives in Nashville and blames the pandemic for his hard time meeting new people.

Gina, 36, is a busy and popular hairstylist in the Nashville area.

Now that she has grown her career, she is ready to build her next dream with a partner that is willing to travel and build a family.

Her match Clint, 40, is an adventurer who is driven by his many passions. He is ready to put his fate in the matchmakers’ hands and hopefully find the one.

Finally, Kirsten, 32, is a strong woman, not willing to settle for anything less.

She is looking for a godly man who won’t be scared of her success.

Shaquille, 31, and Kirsten’s groom, is ready for marriage and believes that family, faith, support and education are essential.

Season 16 began on January 4 on Lifetime and is set to run over 23 episodes.

The show’s previous seasons can be streamed on Hulu, Amazon Prime, Netflix, Philo and Sling TV.

LifetimeMac expressed he’s looking for someone funny, genuine and career-oriented[/caption]