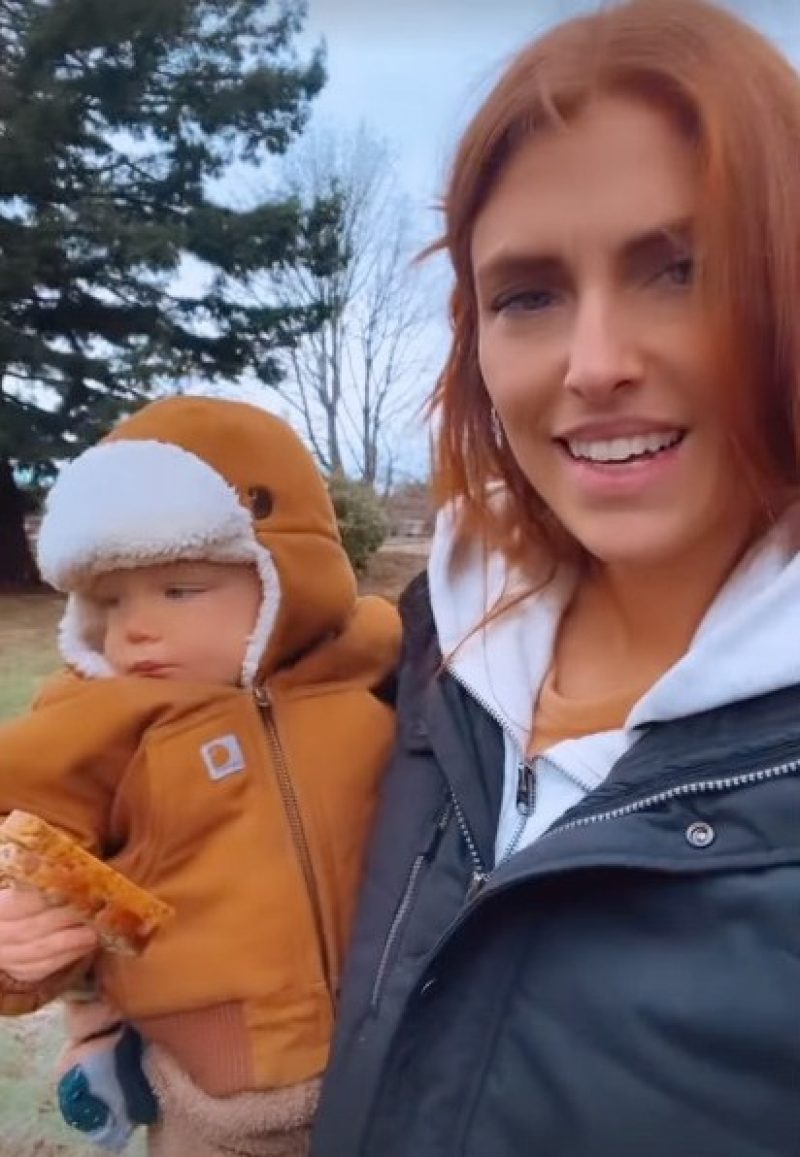 LITTLE People’s Audrey Roloff has made a shameful admission about her new home.

The Little People, Big World alum admitted during an Instagram Q&A that she hates per living room’s beige carpet.

InstagramThe Little People, Big World alum was replying to a fan who confessed that Audrey and Jeremy Roloff’s carpet brings back childhood memories[/caption]

During the “Monday Q&A,” one fan revealed that they “grew up with the same carpet” that is presently installed inside Audrey, 31, and her husband Jeremy Roloff’s living room.

The person explained that when the carpet is shown on Audrey’s Instagram posts, it gives them “the feels.”

The 31-year-old responded to the statement by writing: “Haha I’m sure a couple of families have grown up with it,” punctuated by a “nauseated face” emoji.

The TV personality continued: “It’s not my fave but we decided to have it cleaned rather than take it out and get new carpet when we moved in.”

While this fan seemed to be taken by the interior of the Roloff’s home, Audrey recently had defended herself from trolls who were criticizing her house as being messy.

The reality TV star took to her Instagram Monday to call out the fans who complained about her disorganized space.

Audrey shared a compilation of home videos in the post that featured herself, Jeremy, and their three children.

The clips showed the family, including Ember, five; Bode, three; and Radley, one, enjoying time together at their $1.5million Oregon farmhouse.

In the center, Audrey included the words: “Maybe you also need the reminder that it’s not the time…”

She was also featured in a voiceover, which she reiterated in her caption.

The mom of three explained: “In case you also need the reminder that maybe it’s not the time…

“Social media can make us unhealthfully aware of all the things we don’t have time for… Just 10 seconds on this app and you can easily criticize yourself for 10 things you see other people doing that you aren’t. It can make you feel like you’re failing in many areas of your life if you let it…”

Audrey continued: “You have to open this app with a strong understanding and acceptance of the season of life you are in and the purpose God has for you in it. Otherwise posts that were meant to inspire and encourage you can leave you feeling discouraged or frustrated.

“I’m an opportunist to a fault. I’ve always had this ‘make it happen’ determination and energy that often leads to overcommitting or overstretching myself. I love trying new things and squeezing the most out of life. Always more?

“But sometimes (a lot of times) I need the reminder that now is not the time… and I’ve noticed I especially need that reminder in this season of toddlers and babies, of nursing and napping, of crafts and tea parties, of bandaids and hip carrying, of nose wiping and book reading, of wrestling with daddy and make believe, of fort building and tripping on trucks, and of three littles being so physically and emotionally dependent.

“It IS the time for this. And I want to be fully present for it. Anyone else need this reminder lately?” the TLC alum concluded.

The post responded to critics who’ve repeatedly bashed the LPBW star for having clothes and toys strewn about in the background of photos and videos.

Earlier this month, Audrey admitted that her family has been facing hardships since moving into their 4,414-square-foot abode in May 2022.

During an Instagram Q&A, the mother of three confessed that she and Jeremy couldn’t afford to remodel the 1970s home, despite wanting to make changes.

The admission came after a fan asked if she would “take down the diagonal paneling” in her living room soon, claiming the design “looks a bit crazy.”

Audrey replied: “So many things in our house are [crazy emoji]. It’s straight out of the 70’s so everything is really dated and honestly a lot of things don’t work or are old and beat up…. it needs a lot of fixing.

“But given the state of the economy and our season of life we didn’t wanna rush into a crazy remodel.”

She continued: “And we wanted to live in the house first before making any big decisions.

“There is so much potential and we have a lot of fun ideas but we’re not sure on the when/how yet,” Audrey added.

At the time, Audrey took to her Instagram to show support for small businesses.

In a lengthy post, she shared her story about running several businesses with her husband, Jeremy.

“Together we’ve designed and published 5 books to help encourage and equip families to be more intentional with how they are living/cherishing their life,” she explained in part.

She went on: “From working online, to working with our hands renovating our mountain Airbnb cabin, and moving dirt on the farm to prepare for what’s to come here… we’ve always worked together.

“We’ve always loved entrepreneurship and honing in new skills through lots of trial and error.”

She also admitted her financial struggles through it all.

“Some of our [businesses] have made zero money, some have been extremely profitable, and others have actually cost us. Along the way we’ve quit/stopped a lot of things in order to start or give more attention to others.

Audrey added: “And it’s become more challenging as our family has grown… but I think we will always choose this way of working and all the unknowns and uncertainty that it brings.”

“Amidst the high highs and low lows, the inconsistency of schedule, the late nights and early mornings, the ever-changing algorithm, the working on holidays, the funding of an idea or dream from your savings.

“The customer service, the judgment you sometimes feel from others who deem their jobs more ‘real’ and the ‘on-call’ nature of running your own business… we still chose it,” she concluded.

Instagram/@audreyroloffAudrey explained, ‘It IS the time for this,’ referring to how disorganized her house can become while raising three young children[/caption]

Instagram/audreyroloffAudrey and Jeremy Roloff with their children Ember, Bode, and Radley[/caption]