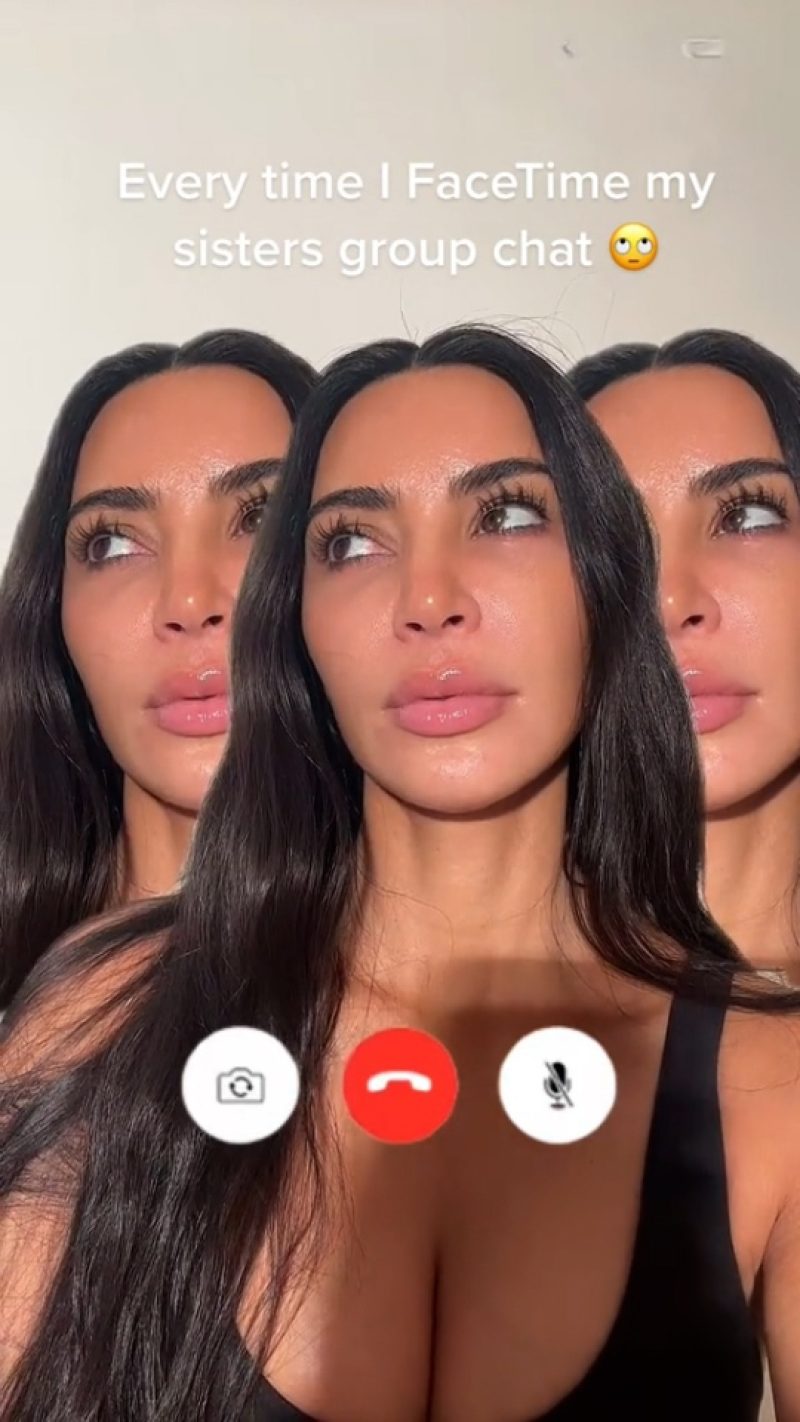 KIM Kardashian has taken a dig at her sisters in a shady new TikTok video amid rumors of a family feud.

The star posted a clip of herself, revealing what it’s like to FaceTime her famous siblings – namely Kourtney and Khloe Kardashian.

Kim’s video featured an effect that made it look like there were three of her.

She wrote over the clip: “Every time I FaceTime my sisters group chat.”

She added an eye-roll emoji.

In the video, she appeared to be looking into the camera before rolling her eyes herself.

Kim didn’t include any more context than that in her post.

Rumors have been swirling that she and her siblings are currently feuding.

It’s been widely reported that Kourtney, 43, has been distancing herself from the family.

Kim, Khloe, 38, Kourtney, and the rest of the Kar-Jenner clan have been tight-lipped about the alleged drama, but that hasn’t stopped fans from speculating.

In addition to buzz about a possible rift with Kourtney, it’s been reported that Kim and younger sibling Kylie Jenner are at odds.

Recently, the makeup mogul was accused by Kim of “coming for her throne.”

In the clip, Kim, Kylie and their mom Kris Jenner were shown having dinner together.

A very serious Kim explains to the momager: “If it isn’t bad enough that Kylie is coming for my throne and we have major beef.”

The Skims founder continues: “This f**king h** over here -“

Confused, Kris interrupts: “What h**?” to which the makeup mogul gladly takes credit, pointing to herself and stating, “Me.”

Kim proceeds to explain to her eagerly awaiting mother: “That h** over there decides to try to copy me again.”

The mother of four‘s annoyance is then revealed to be a facade as Kris questions: “What did you do?” only to have Kim reveal that Kylie “got f**king psoriasis.”

While there are growing tensions between the Kardashian and Jenner sisters, the feud between Kylie and Kim is hard to ignore.

The sisters have reportedly been in a feud for months, a recent example being the Kardashian/Jenner sisters’ trip to Miami.

During their trip, they made a TikTok video in which Kylie, Khloe, Kourtney, and Kendall are all messing around and having fun.

They were all wearing coordinating outfits, but Kim was absent from the girls’ trip.

Fans commented on Kim’s absence and said: “And then there’s Kim at home making TikToks with North.”

Last August, Kylie had an event to promote her cosmetic line, and Kim was accused of trying to steal Kylie’s spotlight.

One fan wrote: “Kims so obviously trying to lean more in the middle and steal the spotlight from Kylie.”

Another chimed in: “We all know Kim was f**king fuming the whole event because it’s getting way more attention than she ever gets with SKKN.”

Around the same time, Kylie started to hang out with Kim’s nemesis, Lori Harvey.

Kim was accused of stealing her SKKN skincare idea from Lori who had a skincare line called Skn.

Instagram/@kyliejennerKim previously accusing Kylie of coming for her title, slamming her on TV[/caption]