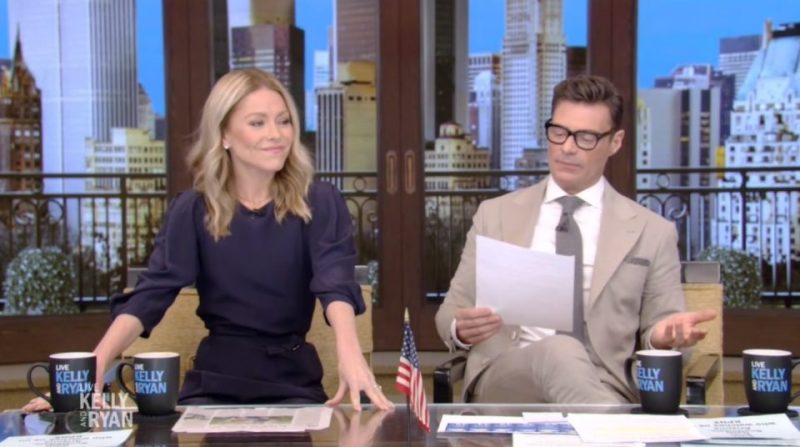 KELLY Ripa has put her co-host, Ryan Seacrest, on the spot and claimed he has a “job interview”.

The Live with Kelly and Ryan star mocked Ryan after he strolled on set wearing his favorite “winter suit” during Tuesday’s episode.

Kelly, 52, and Ryan, 48, kicked off the broadcast by walking over to their desk, with Kelly laughing and rubbing Ryan’s arm as they did so.

When they sat down, she told viewers: “He wanted me to feel his luxury fabric as we were walking out.”

Ryan, who looked smarter than usual in a beige suit, white shirt and gray tie, joked: “I got dressed up for school photos or something today.”

Kelly quipped, laughing: “He’s got a job interview. Every time he wears a suit, I go ‘job interview?’”

Ryan replied: “When I first started here, I thought I had to wear a tie every day and then I realized I don’t.”

Kelly said: “Anything goes, it’s a real free for all. Whatever you want, darling.”

Gesturing at his suit, she added: “This is a luxury fabric, whatever this is.”

Kelly has returned to the morning show after taking several days off while feeling ill.

Earlier this month, she left viewers concerned when she co-hosted the show despite being sick and having barely any voice.

On Monday, Kelly returned to the show and said she’s feeling much better even though her voice is still a bit hoarse.

She said: “Here’s the thing. Last week, the better I felt, the worse I sounded.

“So, [producer Michael] Gelman was like, ‘You have to leave, you’re a talk show host and you have no voice, there’s no point in you being here.’”

The TV personality said it felt like getting a snow day without the snow because she felt “fine,” but just “didn’t have a voice”.