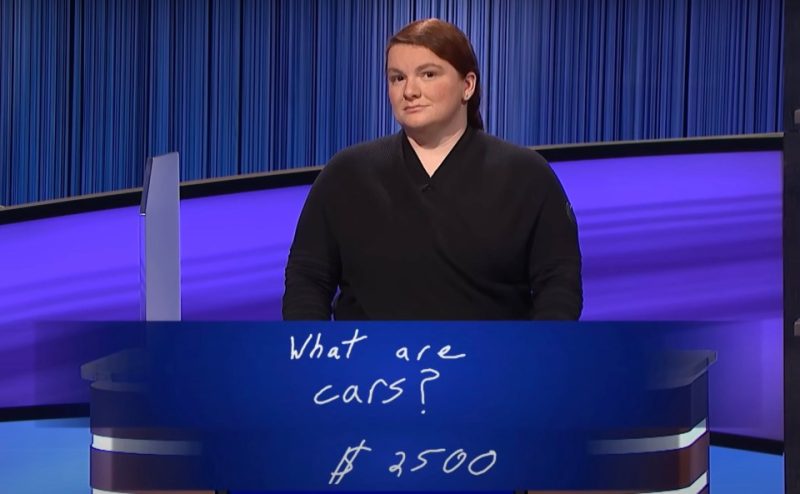 JEOPARDY! fans have accused the treasured game show of phoning in its all-important final clue.

The New York Times – which prints Final Jeopardy daily – even altered it for clarity when they ran it.

Jeopardy!Katie Palumbo won Monday’s episode despite being clocked for her response[/caption]

Jeopardy!Ken Jennings was looking for ‘Ford Model T’ with wording that was not exactly on the money, hundreds accused[/caption]

It was an eventful game as Katie dethroned the frontrunner with the highest score.

Under the category “Business Milestones” it read: “These were first sold in 1908 at a price equivalent to about $27,000 today.”

‘YOU WERE SO CLOSE’

None of the contestants managed to give the correct answer: “What is: the Ford Model T?”

However, Katie was in the right direction with “What are: cars.”

“This was the Ford Model-T, the first affordable car for middle-class consumers,” Ken continued.

“Because of Henry Ford’s assembly line technology,” he trailed off.

Fans were extremely irked by the vague nature of the clue, as none of Ken’s explanation was on the screen with plenty of room to spare.

Many also spotted the clue asking for “these”, but the desired response was singular, or one model.

“Yes, the question was poorly worded. It didn’t seem to demand such specificity,” replied another.

“It was a table-flipping question. And they knew full-well someone would probably answer cars,” fumed a third.

“Absolutely, if Katie had lost on that Final Jeopardy,  she’d have every right to protest,” wrote a fourth fan.

“Why did they say ‘these were first sold?’ They should said ‘this model was first sold.’” wrote a fifth.

Others claimed Katie’s response seemed fair game as an alternate given what was presented – and since the Ford Model-T is still a car.

And while a few fairly defended that there were cars before the Model-T, the consensus was the clue was lacking enough components to get there.

“Agreed. The question specially asked what product was made in 1908 that has an equivalent value of $27K in today’s dollars.

“Not whether it was affordable for consumers or mass produced. The answer was correctly: ‘What is a car?’”

“They need to give her the money back. Luckily, it didn’t affect her winning,” another angrily posted.

Every day the Final Jeopardy clue is printed in The New York Times and in a rare move the clue actually was edited seemingly for clarity to say “this” instead of “these.”

Over the summer, Ken and actress Mayim Bialik, 47, were announced as the permanent replacements for the late, great Alex Trebek, who had hosted since 1984.

The hosting announcement hasn’t been the only big change for Jeopardy!, as executive producer Michael Davies – who replaced the ousted Mike Richards – filled a job that before them, hadn’t changed hands in decades either.

Davies has his eye on expanding the show’s postseason as his hallmark, recently announcing Jeopardy! Master’s.

Meanwhile, the microscopes are out for traditionalists, and they’ve spotted plenty they haven’t liked on the regular show.

In her second game, Katie lost as she and her two new opponents drew blanks on a clue asking for Arkansas and Iowa – the clue used the mnemonic “MINAL” in the question.

Fans who even lived within the five states in the clue said they’d “never heard of” them being grouped that way.

The game show also caused wrath like no other with a King James bible question fans fumed was flawed in its premise – and spoiled a bunch of TV shows in one fell swoop.

Fans also recently accused the show of being flat-out wrong on a clue about TV’s Beverly Hillbillies.

The clue read: “After Jed Clampett discovered oil on his Appalachian property, he loaded up his family and moved to this more affluent locale.”

However, people hauled it to Reddit where they spotted that the fictitious family is not from the Appalachians, but the Ozarks.

Jeopardy!Jeopardy! fans claimed this ‘terribly worded’ clue left much to be desired[/caption]

Jeopardy!The New York Times reworded ‘these’ to ‘this’ as the correct response was singular, not plural[/caption]

Jeopardy!Katie Palumbo still won the episode with the highest score[/caption]