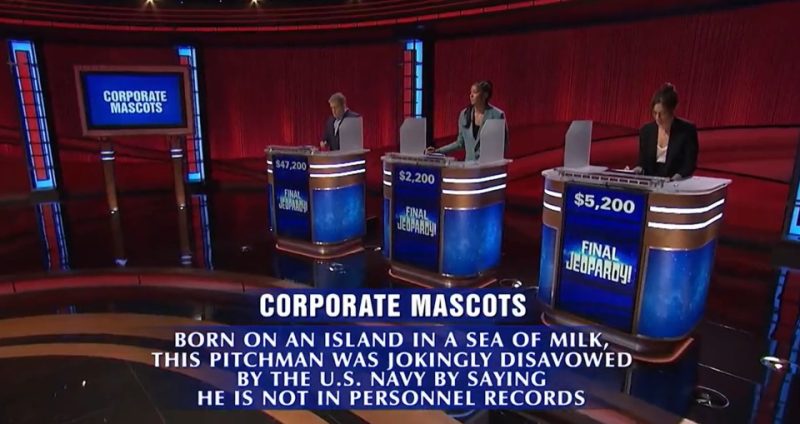 JEOPARDY! fans have mocked two celebrity contestants who did not know a “very obvious” clue in Final Jeopardy!

The embarrassing video was posted to the show’s Twitter page and fans couldn’t get enough.

Patton Oswalt, basketball player Candace Parker, and actress Torrey DeVitto all competed against each other on the lastest episode.

Although they all racked up good amounts of money throughout the game, only Patton knew the answer to the final Jeopardy! question.

The clue was “Born on an island in a sea of milk, this pitchman was jokingly disavowed by the U.S. Navy by saying he is not in personnel records.”

The contestants wrote their answers down in 30 seconds, looking a bit confused.

When time was up, Mayim asked them to reveal their answers.

She started with Candace, who answered: “Who is?”

She said she came up with nothing because she didn’t understand it.

Luckily, the basketball player only waged $240, so she didn’t lose that much money.

Torrey then answered with: “Who is, I have no clue?”

She said it was her most intelligent answer of the game and wagered $2,000.

It was finally Patton’s turn and he answered: “Who is Cap’n Crunch?”

“That is correct,” Mayim told him.

“The U.S. Navy points out that while Crunch has explored many a cereal bowls, he actually wears the rank of a U.S. Navy commander, but he calls himself a captain.”

Torrey then realized that the “sea of milk” portion of the clue added up to Cap’n Crunch.

He advanced to the semi-finals.

Jeopardy! fans could not believe that the contestants did not guess the “obvious” clue.

They commented on the video to thank Patton for getting it right.

“I knew it was Cap’n Crunch cuz of the keyword ‘milk’,” one wrote.

“Thank you for not letting our people down, Patton,” said another.

A third added: “I really fell for their confidence of them writing on the tablet.”

“We don’t even have this cereal in Australia and I knew it,” said another.

“How did the other two miss it. The answer was so easy,” wondered one Twitter user.

“I got it right away,” commented one fan.

Mayim has been hosting the celebrity version of the show while Ken Jennings hosts the regular version.

During an episode of Celebrity Jeopardy! earlier this year, Mayim cut off actor Michael Cera in a cringey episode.

Throughout the show, Mayim behaved in a way some would interpret as cringe-worthy.

Michael tried to guess a clue after his fellow famous contestant Zoë Chao, 37, from the show Party Down, missed it.

Since the clue was about Asian cuisine, Zoe said that she felt like a “bad Chinese person” for not knowing it.

After the Arrested Development alum guessed the clue, he then was clunkily silenced by Mayim.

“Going to take a commercial break,” Mayim said aloud from a scripted cue card, not allowing the Juno leading man to choose another one though he was midway through doing so.

Piling onto the painful awkwardness, Mayim also spent the first interview portion of Jeopardy! basically rattling off about the iconic mid-2000s movies, Juno and Superbad, that poor Michael starred in.

Many fans of Michael took to Twitter to share their heartfelt reactions to seeing him on Celebrity Jeopardy!

Another beamed: “MICHAEL CERA. ON CELEBRITY JEOPARDY! Be still my beating heart.”