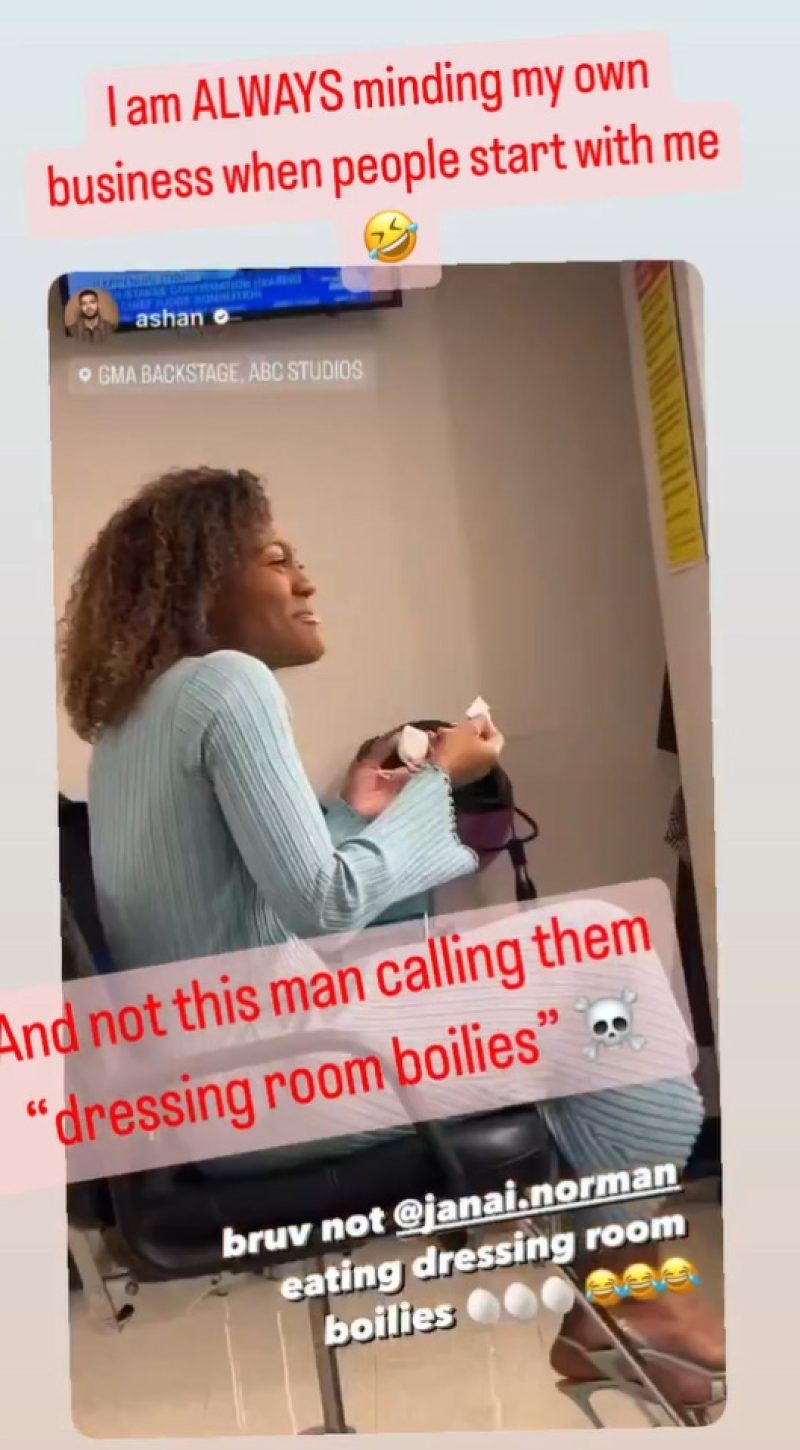 GMA star Janai Norman has been called out for eating boiled eggs in her dressing room in a behind-the-scenes clip.

Reporter Ashan Singh gave fans of the morning show a taste of what Janai is like behind the scenes with an Instagram clip.

GMA’s Janai Norman was caught snacking on boiled eggs in her dressing roomInstagram/janai.normanAshan Singh captured the behind-the-scenes moment and shared it to InstagramABC

The clip found Ashan heading backstage to Janai’s dressing room, where she could be seen snacking on boiled eggs.

Clad in a light blue sweater top and sitting in her dressing room seat, Janai quickly turned away from the camera.

She begged Ashan to turn it off as she started laughing uncontrollably.

The clip carried the caption “bruv not @janai.norman eating dressing room boilies’” in a reference to Janai’s choice of snack.

“I am ALWAYS minding my own business when people start with me,” Janai wrote on top of the clip when she re-grammed Ashan’s video.

“And not this man calling them ‘dressing room boilies’,” she continued.

Ashan could be heard calling Janai out for snacking on the “boilies” while she scooted away from the camera so she could avoid being filmed.

The pair were laughing hysterically the entire time.

Earlier this week, Janai shared a photo from her trip to Egypt.

The morning show star shared a photo of herself riding a camel, which her co-hosts absolutely loved to see.

Janai took to Instagram to post a picture of herself riding a camel in front of some pyramids.

She had an ear-to-ear smile and wore all-white to stay cool from the intense sun.

Several of her co-hosts poured into the comments to share their awe.

Janai had taken time out for herself to head to Egypt as part of her holiday break.

On the final GMA of the year in 2022, she took some time out to apologize to co-host Whit Johnson while live on air.

Whit was leading a segment about virtual reality headsets when Janai interrupted him.

“You’re supposed to throw on your VR headsets and party like an NBA superstar to ring in 2023. And if you-,” Whit said during a segment before Janai interrupted him.

“If you don’t have a VR headset, well that’s what-,” he said as he turned to Janai.

Then Whit asked: “Can you let me finish?”

Their co-host Gio busted out into a fit of laughter as the pair continued to bicker.

Whit couldn’t help but crack a joke in response: “New Year’s resolution for 2023. Will not interrupt Whit in the middle of his sentence.”

Janai said of the VR headsets: “I was like, ‘I need to get one of these!’”

When the segment concluded, Whit had a kind word for her: “I- You know I love you dearly.”

The clip showed Janai snacking on her eggs while begging Ashan to ‘turn the camera off’Instagram/janai.normanAshan taunted Janai, saying she was eating ‘dressing room boilies’ in reference to her eggsInstagram/janai.normanThe pair couldn’t stop laughing throughout the entirety of the clip