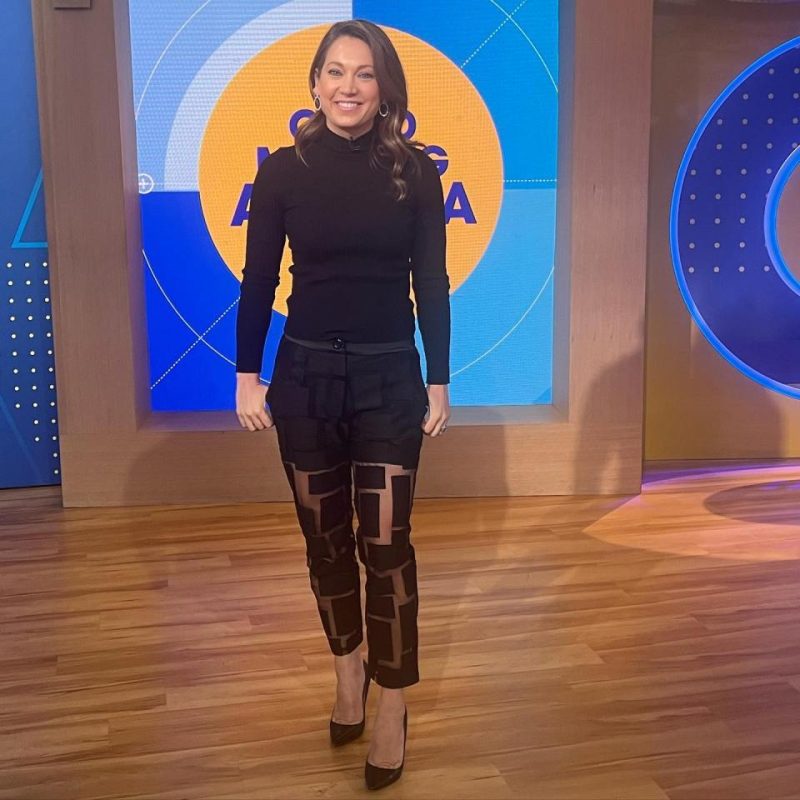 She stunned in the not-so-typical look for her.

On Wednesday, Ginger posted a photo of her in her outfit to Instagram.

“The pants were a hit @msmerylin — you were right. photo: @samwnek — check out my story for the details and fun story about how Merylin doesn’t follow directions,” she captioned the post.

The meteorologist smiled for the camera in an all-black ensemble.

She wore a long-sleeve turtle neck with see-through pants, and heels.

Her pants had solid shorts underneath of them, but were mesh material once they got done to about mid-thigh.

They had a button on them and were patterned with squares.

Ginger even stood with her hands in her pockets to show off all the bottoms had to offer.

She stood on the set of GMA and wore them throughout the whole broadcast.

Ginger took to her Instagram stories to explain more about her pants.

The 42-year-old posted the same photo that she did to her feed and wrote: “Thanks for the @viviennehuofficial pant @msmerylin now I’m giving them back.”

Merylin Mitchell is her hairstylist on the show.

The next story showed Merylin reposting the photo saying: “I got her those pants and she wore them without me being there!! I had a vision for this look. Maybe next time.”

The hair stylist finished off the post with a sticker of the word “fab.”

Another fan asked her where she got the pants and she answered that they are from a sample sale from Vivienne Hu.

Ginger admitted that Merylin was the one who bought them.

The meteorologist also shared another fan’s post that read: @ginger_zee is my wardrobe hero.”

“Every consultant everywhere is having an absolute meltdown that she’s wearing all black and pattern pants and I LOVE IT!’

Ginger replied: “Ah yes. I am a consultant’s NIGHTMARE.”

GMA fans took to the comments of her post to leave their opinions on her pants and they were divided.

“My husband kept asking me what in the world you had on this morning. I love them,” said another.

A third commented: “You looked beautiful.”

“Pants were dope this morning caught my attention,” said another.

“If anybody can pull these off, it’s you,” wrote an Instagram user.

“I can’t handle how amazing these pants are,” said a fan.

One critic simply told her to “stick to the weather.”

Another thought she had black post-it notes sticking to her pants.