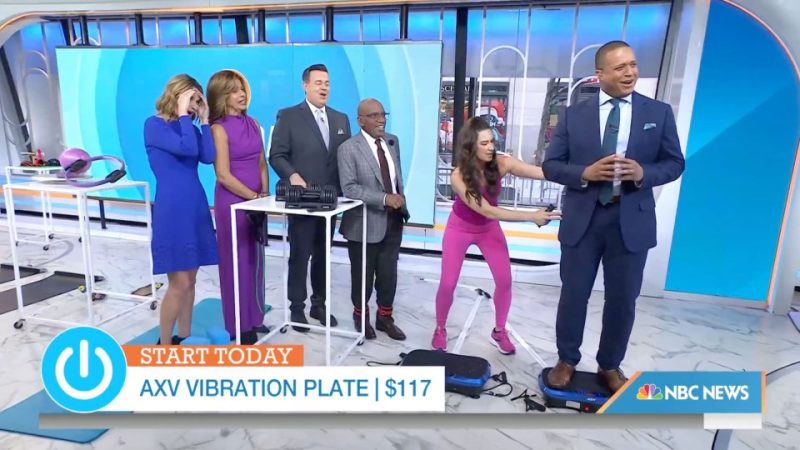 TODAY’S Carson Daly has made an off-the-cuff, sexually suggestive joke about Craig Melvin’s body while on the air.

On Wednesday’s episode of Today, fitness expert Stephanie Mansour dropped by to share the benefits of exercise gadgets like vibration plates with the hosts, including Carson Daly, Craig, 43, and Savannah Guthrie.

The Today hosts checked out a variety of fitness-centric gadgets on Wednesday’s broadcastNBCCarson Daly, joined by the rest of the Today hosts, tried different pieces of equipment, including a vibration plateNBC

Among some of the items on display were slideboards, adjustable weights, pilates rings, yoga kits, and more, all aimed at helping users enhance their workouts.

The hosts then tried out a few pieces of the home gym equipment on their own, with Craig trying out a vibration plate.

Vibration plates offer whole-body vibration and force your muscles to relax and contract dozens of times per second, which can translate to exertion.

He stepped onto the plate and stood uneasily as the machine began to work its magic.

The rest of the hosts looked on while Craig experienced the vibrations the gadget had to offer, and Mansour stepped in to tell Craig what it was he was experiencing.

“Your muscles are working 30 to 50 times more per second,” she explained as Craig stood on the plate.

“It’s not just his muscles that are working,” Carson, 49, quipped, prompting a round of laughter from the hosts, including Mansour.

The segment continued, but the hosts kept on laughing about the raunchy joke Carson made.

Earlier this month, Carson tossed a brutal barb at co-host Savannah, 51, during one of Today’s POPStart entertainment segments.

During the show, Carson discussed the popularity of Wednesday, Netflix’s adaptation of The Addams Family.

The teen mystery series, which stars Jenna Ortega as the gloomy daughter of Morticia and Gomez, features a dance scene that immediately went viral.

The dance features funky, erratic movements that almost mirror that of a zombie stomping around.

While speaking over a clip of Jenna dancing in the show, Carson couldn’t resist a chance to toss a dig at his co-star.

“Looks like Savannah dancing at a wedding after a couple of chardonnays,” he said.

The other hosts burst out laughing, and they kept it rolling.

Carson chuckled to himself but continued the segment immediately after.

Savannah took her turn to sling a jab at Carson on Tuesday’s broadcast.

Savannah’s quick dig at the TRL alum was caught on a live mic, despite the host being off to the side of the stage.

Meanwhile, the other hosts sat eating at a table off to the side, with the camera sometimes panning to them.

The chef showed off an easy steak dinner that only took five ingredients to make, with Carson going through each step of the recipe with her.

he Today host joked that there was no reason for viewers to really take the advice the teleprompter was telling him to give them.

Carson said, pointing out the QR code at the bottom of the screen: “These ingredients – there’s only five of them, I don’t know why you need to scan the code!

“But the code is there if you’d like to use it.”

He then added: “Go to Today.com/TodayTable, where a small commission is earned on things that you buy.”

That’s when one of Carson’s co-hosts off screen, who sounded like Savannah, teased Carson for answering his own joking question.

“That’s why!” she quickly shouted at him from off to the side, as the answer to why viewers have to scan QR code for the recipe, after he said their company earns a commission from when fans purchase items through it.

Carson’s smile faded when he realized the silliness of his own question.

Craig stepped up on the vibration plate to give it a try as the hosts looked onNBCWith Craig’s entire body vibrating, Carson made a quip that the host’s muscles ‘weren’t the only thing working’NBCThe entire set burst out in uproarious laughter at the raunchy jokeNBC