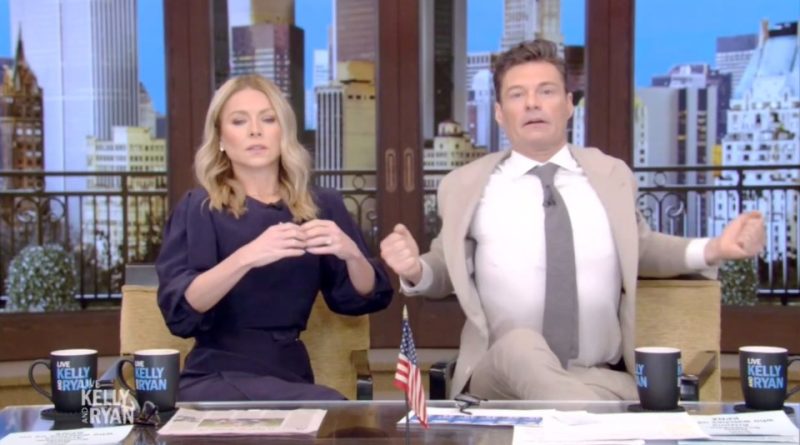 RYAN Seacrest has revealed his bare chest after suffering an awkward wardrobe malfunction live on air.

Ryan, with host Kelly Ripa, back from her hiatus spent recovering from an illness, prepared to introduce the show’s next portion when the wardrobe issue occurred.

Ryan introduced the next segment: “So Kelly, in today’s show, we continue our ‘Best Me in 2023’ series with Dr. Melina Jampolis and a look at heart-healthy foods.”

Ryan spoke emphatically and moved his arms around while pumping up the audience about the next portion of the show.

While mentioning “heart-healthy foods,” however, he stretched his arms a little too wide, which resulted in an embarrassing on-air gaffe.

A button popped off of Ryan’s shirt, revealing a small patch of his bare skin right in the center of his chest.

The audience burst out into laughter while Kelly attempted to predict what kind of “heart-healthy foods” Dr. Jampolis would suggest.

Meanwhile, Ryan tried to cover the hole in his shirt while barely stifling laughs.

Jenny took some time to tell the audience how she met her husband, actor Jason Biggs.

While Jenny did so, a Live producer made sure to tell the audience that the American Pie actor is, in fact, Jenny’s spouse.

Jenny told Ryan she was set up on a blind date with Jason when they first met.

Ryan commented blind dates “freak him out” but countered: “I guess it’s different because he is well-known.”

He continued addressing the off-camera staff: “If you just give us a second to settle in, we’ll get there!”

The American Idol host then addressed the audience and said: “Jason Biggs, of course, we speak of. Very famous.”

Ryan hosted alongside Jenny on Live as Kelly remained at home recovering from her mystery illness, but she was still on his mind.

He and Jenny interviewed actor Morris Chestnut about his appearance in The Best Man: The Final Chapters.

Morris Chestnut talked about being “butt booty naked” during a pool scene, which got the audience riled up.

He told the hosts that for that particular scene, he wanted a body double.

Ryan and Jenny couldn’t believe what they heard, as Ryan pointed out People had named Morris the “sexiest man alive.”

The audience clapped and cheered in agreement as a photo of Morris in just a pair of sweatpants appeared onscreen.

“You’re not going to find a double better than that!” Jenny exclaimed.

Ryan asked Morris what the “industrial rope” was around his neck in the photo.

“Kelly’s gonna be sad she’s out today,” Ryan joked, looking into the camera.