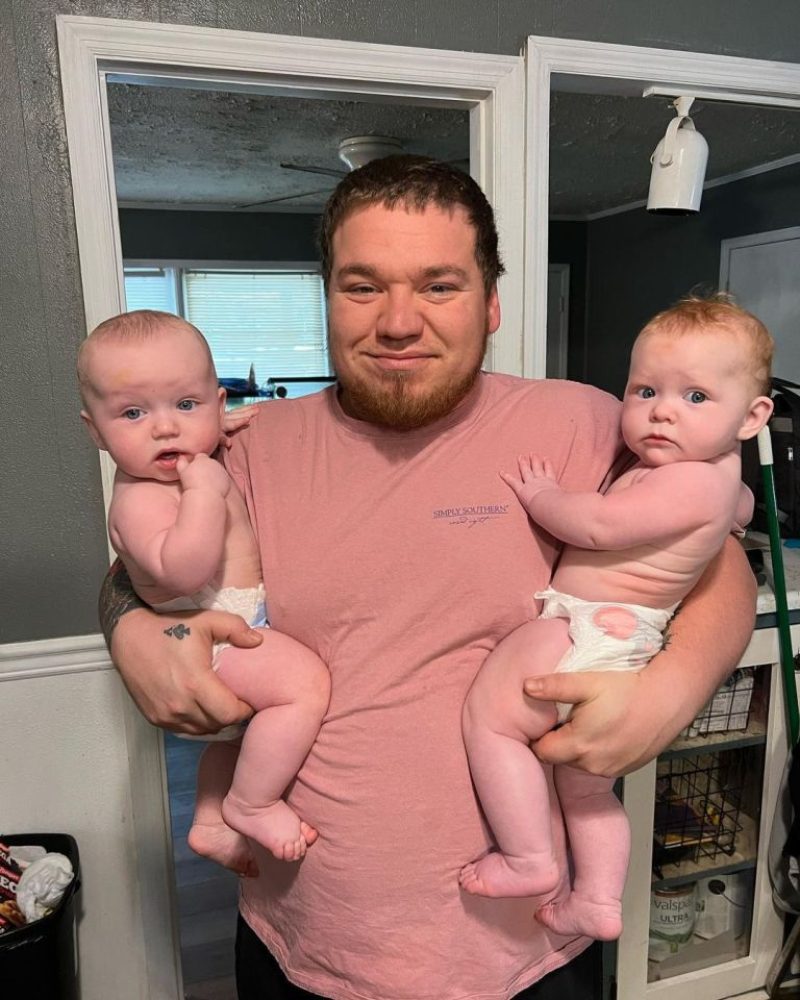 LAURYN “Pumpkin” Efird has shared a new update on her young twins.

The baby boy and girl are now eight months old.

Pumpkin shared a pair of photos of twins Sylus Ray and Stella Renae to her Instagram.

In first photo, daddy Josh held his then tiny newborn babies in each hand.

The shirtless papa smiled broadly as the twins rested.

The second photo was much more recent.

Again, Josh was holding each child, who were considerably larger and more aware.

This time he was fully clothed, and had much shorter hair.

Pumpkin, 23, captioned the snaps: “Woah! 8 months sure make a difference. Still so crazy to think we have twins.”

She ended by giving her husband a special shout-out.

“You are the best dada,” Pumpkin wrote.

In earlier photos exclusively revealed by The U.S. Sun, Pumpkin was glowing as she proudly showed off her new twin babies, making it four children in her home.

Road to Redemption star gave birth via c-section to the twins on May 19, 2022 at a Georgia hospital, as The Sun originally exclusively reported, and in stunning photos the happy parents showed off their brood of children which is now doubled.

Stella weighed in at 6lbs 1oz when she was born at 8:50 am and little Sylus followed one minute later weighing 5lbs 4oz.

Pumpkin revealed she and Josh were the only people allowed in the delivery room when the twins were born.

After the birth Josh’s mother, stepfather and grandmother were the first visitors.

An elated Pumpkin told The Sun: “The family is really happy. Things have been stressful adjusting to three babies under one-year-old and just five kids in general but it’s nothing me and Josh can’t handle.

“This just means life is a little more hectic but will be so worth it in the end.”

Pumpkin and her younger sister,  Alana “Honey Boo Boo” Thompson, have had a rocky relationship with the twins grandmother, Mama June Shannon.

However, June recently revealed she was back in touch with Pumpkin.

The 43-year-old said in a video on TikTok: “I have grown to know who I am mentally and emotionally and it has helped me with my relationship with my girls.

“We’re actually in Georgia now celebrating Pumpkin’s birthday because I won’t be in town on her birthday next week.”

June added that she was planning to see her daughters more regularly.

“I love that and we’re trying to do that once a week,” the former TLC star said.

She also talked about leaving behind her “bad habits” by surrounding herself with people who “match her energy.”