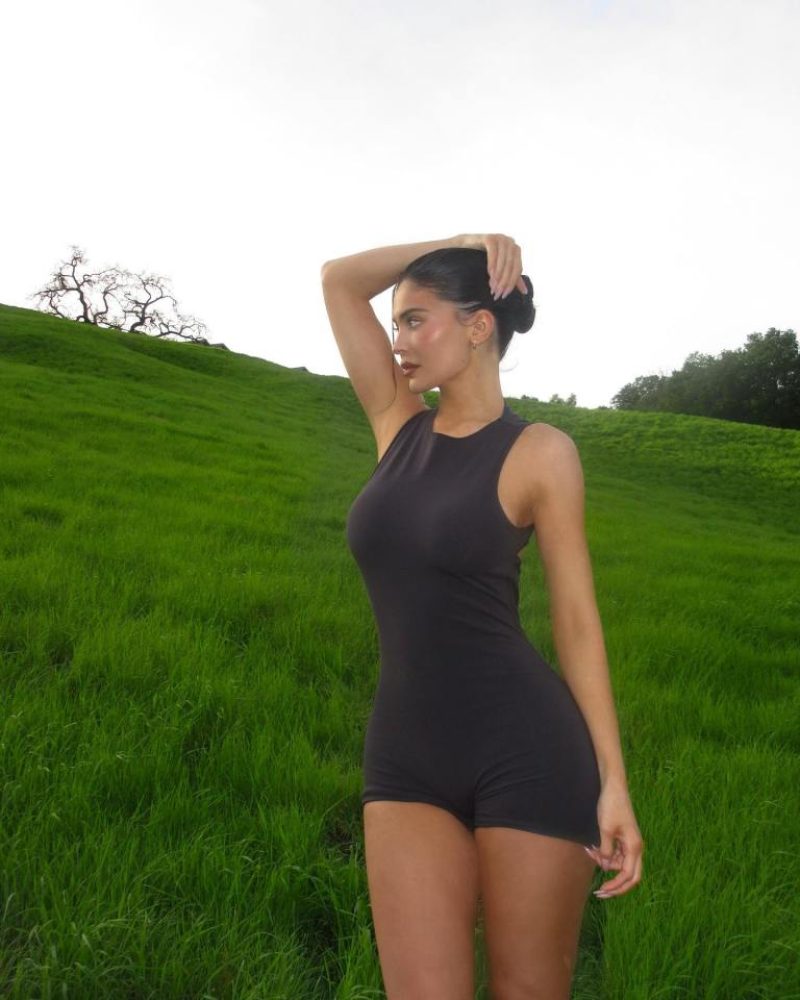 KYLIE Jenner has sparked concern as her famous butt seemingly disappeared in a new photo after fans think she’s losing too much weight.

The Hulu star shared a series of photos of herself enjoying the outdoors on her Instagram Monday.

Simply captioned “kyventures,” the post featured several snapshots of Kylie, 25, standing in the middle of a lush green field.

The Keeping Up With the Kardashians alum was depicted wearing a sleeveless charcoal gray Skims bodysuit and knee-high black boots.

The makeup mogul wore her hair slicked back into a tight bun and showed off some skin with the open back of her neutral-colored one-piece.

In the comment section, Kylie’s older sister Kim Kardashian, 42, urged her younger sibling to “tag @skims please LOL” so that her 378M followers would know where to purchase the bodysuit.

Elsewhere in the comments, one person wrote: “The BBL era has officially ended,” referring to the TV personality’s famous rear that appeared to be much smaller in the photos.

Another follower added: “I thought I was the only one,” while Kardashian fans on Reddit openly debated the reasoning behind Kylie’s lack of back.

One of the photos was reposted on a Kardashian-dedicated Reddit board next to a recent shot of the LA native at the 2022 Billboard Music Awards.

The post was titled, “Where did the a** go Kylie?”

In the comment thread, one Redditor joked: “Travis got it in the split.”

Another fan wrote: “That’s weight loss- and a lot of it.”

A third person agreed, adding: “She looks like she lost 30 lbs in a few weeks.”

“It must be nice to just be able to alter your body when the trends change,” commented a fourth.

One fan considered: “She lost weight and probably had some fat taken out as per the new thin trend.”

Kylie clapped back at Kim over the comment she posted criticizing the 25-year-old for not promoting her Skims brand in her post.

Kim, ignoring how Kylie looked in the skintight jumpsuit, only comment on the photos was, “can u tag @skims please LOL”

Kylie’s Instagram followers could not get enough of the social media spat.

“She just won’t let kventures shine how rude,” another wrote.

In the wake of Kim’s acknowledgment request, Kylie was also dragged by the official FaceTune account online, which implied she needed to tag them in for a photo credit.

FaceTune is a photo editing application used to edit, enhance, and retouch photos, and it seems they believe mom-of-two Kylie uses their app frequently.

The snap – which was originally posted on Kylie’s Instagram on Monday – showed the reality TV star standing in a green, grassy field wearing a skintight SKIMS playsuit.

After Kim commented: “can u tag @skims please LOL,” the official FaceTune Instagram account as they wrote in jest: “can they tag me pls LOL.”

A Kardashian fan account grabbed a screenshot of the exchange and shared it on their own account alongside the caption: “Oh no they didn’t,” followed by several laughing face emojis.

“This can’t be real,” one person wrote, while another claimed: “It’s definitely real. The comments have now been limited. Haha.”

“LMFAOOOO,” a third person said, while a fourth echoed this and added: “Lmao! Respect.”

“Holy sh*t. I need to know if this is real,” someone else commented, while a different Reddit user said: “I don’t think this is a great AD for skims anyway it looks kind of loose and not form fitting.”

Another person accused it of being a setup and commented: “Kim, Kylie, and Kris pre-planned this all for promo.”

Of course, this isn’t the first time that it’s been suggested that Kylie uses editing applications to alter her snaps.

And just last week, an old video of Kylie talking about selfies during an interview resurfaced on TikTok.

The video was shared on a Kardashian-themed online forum, where fans ripped the star over her confession.

Instagram/KylieJennerKylie’s sister, Kim Kardashian, called out the makeup mogul for not tagging her shapewear brand Skims in the Instagram photo[/caption]

Instagram/KylieJennerThe photo editing application company, FaceTune, also called out the TV star for not tagging the company’s Instagram in her photos[/caption]