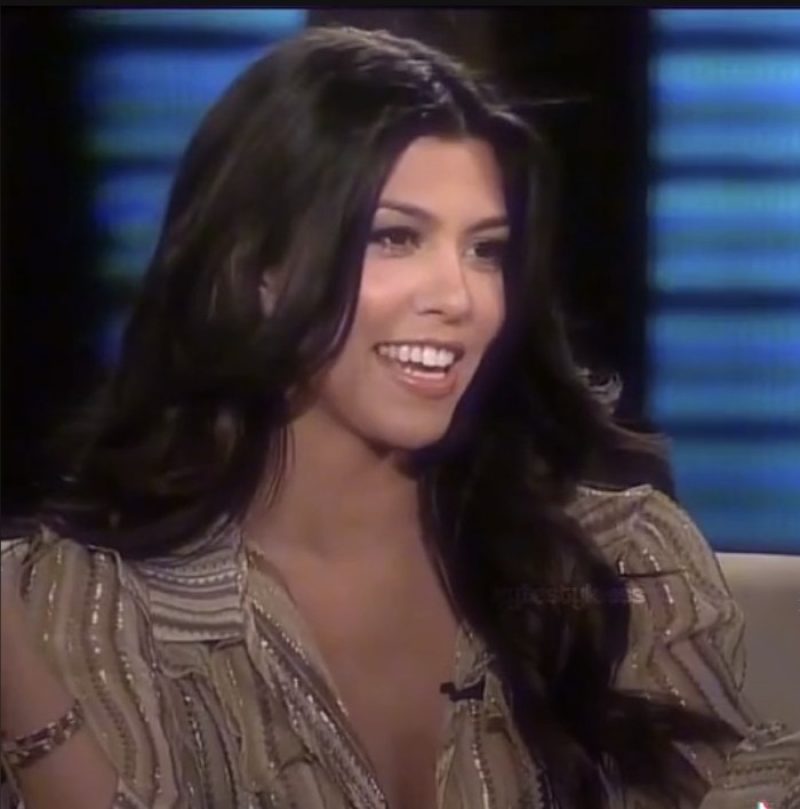 Kourtney Kardashian’s behavior in a resurfaced video before her marriage to Travis Barker has fans buzzing.

Viewers noticed that Kourtney‘s confidence level has been changing since tying the knot to Travis, 47, after a clip of her visit to the talk show Lopez Tonight showed up on TikTok.

In the clip, the Poosh founder looked glamorous as she was interviewed by George Lopez on his past late-night talk show.

Kourtney had long bouncy tresses with the signature Kardashian middle part and her makeup enhanced her existing beauty.

The star explained that there wasn’t any contest between her and sisters, Khloe and Kim.

Kourtney went on to compliment both of her sisters, telling George: “I love that Kim’s beautiful, I love that Khloe’s funny.”

She continued: “Khloe’s beautiful, Kim’s funny. Like, it’s not a contest.”

When the funnyman asked the Hulu personality how she would describe herself, she self-assuredly responded: “all of the above honey,” with a smile, causing the audience to roar approvingly.

Many fans that viewed the short clip were surprised to see such a lively and confident version of Kourtney.

“Wow I’ve never seen her speak so confidently on an interview,” one person wrote.

A second expressed: “She’s gorgeous in this interview and so funny and charming. I wish she’d bring back the bouncy long hair, it just makes her look much more fresh and is more flattering.”

A third added: “I’ve always loved her confidence and how quick she is with her responses,” and a fourth complimented: “I love Kourtney’s style here.”

“She’s that girl!” someone else said.

TRAVIS IS IN ‘CONTROL’

To some fans, Kourtney’s confidence has seemingly scaled down amid her marriage to Travis.

Back in November supporters called out the Blink-182 drummer for what they believed was “controlling” behavior from him.

During Kourtney and Travis’ episode of The Kardashians that centered around them being fitted for their wedding attire, the rock star had specific demands for the reality star’s look.

Fans shared the clip on Reddit, where they weighed in and it seemed many weren’t feeling the interaction.

“He seems nice but I also get controlling vibes from him…” one shared at the time.

Someone else replied: “Me too. In a very subtle way. Which makes it scarier and less obvious to outsiders. This interaction makes me wonder if her dress was something else entirely until he says he wants a sexy dress.”

A third commenter jumped in, saying: “It’s weird because I get what you’re saying but controlling as a word doesn’t fit for me quite. Definitely love bombing that’s manipulative.”