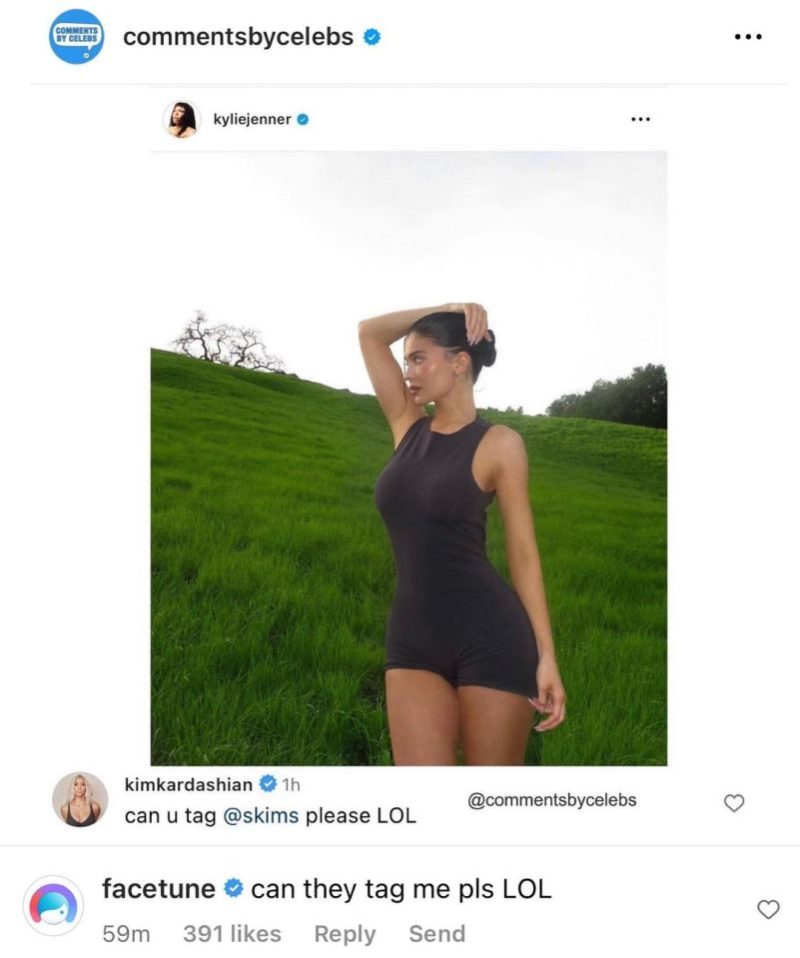 KYLIE Jenner was dragged by the official FaceTune account online, which implied she needed to tag them in for a photo credit.

FaceTune is a photo editing application used to edit, enhance, and retouch photos, and it seems they believe mom-of-two Kylie uses their app frequently.

The snap – which was originally posted on Kylie’s Instagram on Monday – showed the reality TV star standing in a green, grassy field wearing a skintight SKIMS playsuit.

Kylie’s older sister Kim, who founded the fashion brand, quickly commented on the post and said: “can u tag @skims please LOL.”

A Kardashian fan account grabbed a screenshot of the exchange and shared it on their own account alongside the caption: “Oh no they didn’t,” followed by several laughing face emoji.

“This can’t be real,” one person wrote, while another claimed: “It’s definitely real. The comments have now been limited. Haha.”

“LMFAOOOO,” a third person said, while a fourth echoed this and added: “Lmao! Respect.”

“Holy sh*t. I need to know if this is real,” someone else commented, while a different Reddit user said: “I don’t think this is a great AD for skims anyway it looks kind of loose and not form fitting.”

Another person accused it of being a setup and commented: “Kim, Kylie, and Kris pre-planned this all for promo.”

Of course, this isn’t the first time that it’s been suggested that Kylie uses editing applications to alter her snaps.

And just last week, an old video of Kylie talking about selfies during an interview resurfaced on TikTok.

The video was shared on a Kardashian-themed Reddit, where fans ripped the star over her confession.

Kylie has been called out for her use of Photoshop several times through the years.

Most recently, many people accused Kylie of photoshopping her body after she released some glamorous photos.

The Kardashians star looked stunning in a white bejeweled gown for a new ad to promote Kylie Cosmetics.

Kylie wowed in the dress, which featured statement shoulders and an embellished collar.

She styled her hair in voluminous Old-Hollywood waves and framed her features with scarlet lipstick.

While many fans praised the Kardashians star’s retro look, some pointed out that it looked like she had retouched the snaps.

One remarked that her waist looked “obviously edited.”

“You need to work on your photoshop skills. that curve on your torso is too obviously edited,” they commented.

Another posted: “Her body does not look like that in real life.”

Kylie Cosmetics/InstagramEarlier this month, critics hit out at Kylie for editing this glam shot for her latest Kylie Cosmetics collection[/caption]