Jeopardy! fans swoon over player Jimmy Davoren and are all saying the same thing about one specific feature 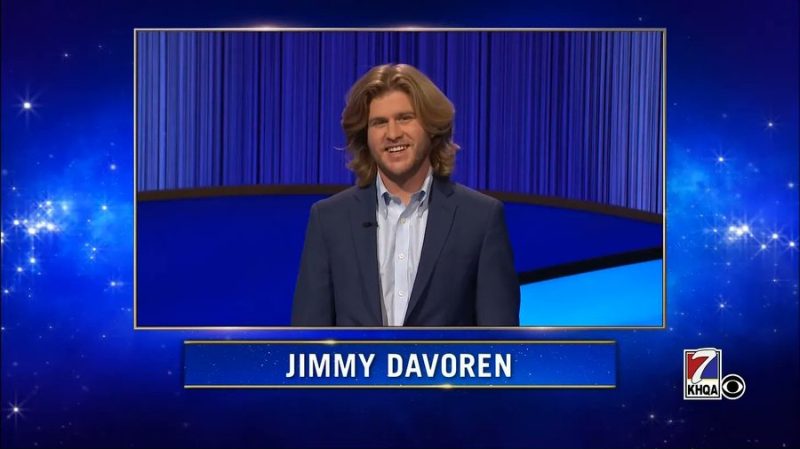 JEOPARDY! fans were left swooning over one particular contestant during Monday’s show.

The latest episode of the popular game show saw Jimmy Davoren take on champion Yogesh Raut – but viewers were distracted.

Many were much more interested in Jimmy’s appearance as opposed to his general knowledge skills.

Jimmy looked very suave in a smart pale blue shirt, which is teamed with a navy blazer and a luscious head of hair.

His healthy-looking main almost touched his shoulders and appeared to have been blowdried for his appearance on Jeopardy! which is hosted by Ken Jennings.

Taking to Twitter, one fan of the show said: “I’m rooting for Jimmy’s hair because it is awesome! #jeopardy.”

Another said: “I just have to say Jimmy has the healthiest looking hair I’ve ever seen #jeopardy.”

A third tweeted: “I wish I had 20% of Jimmy’s hair. Just 20%. What a mane. #jeopardy,” while a fourth person admitted: “Really distracted by Jimmy’s perfect hair #jeopardy.”

“Jimmy has great hair! #jeopardy,” someone else noted, while another fan added: “Jimmy has the most beautiful hair I’ve ever seen. #Jeopardy.”

“Ken not asking Jimmy about his hair is criminal #jeopardy,” one viewer stated, while another said: “Jimmy is a throwback to the ‘70’s with that hair!#jeopardy.”

Others compared Jimmy to a member of the Bee Gees, as one said: “Okay, is it just me or is this contestant on @Jeopard Jimmy giving you Andy Gibbs vibes #jeopardy.”

Someone else joked: “After tonight’s #Jeopardy, Jimmy will be performing as Barry Gibb in a Bee Gees tribute band.”

Sadly for Jimmy, his hair didn’t serve as a good luck charm as he ended up trailing behind Yogesh and fellow contestant Katie.

The female player ended up defeating both Jimmy and Yogesh, with host Ken declaring it “a great game”.

As the episode aired, many viewers picked up on a habit from Yogesh that might have prevented him from having a stronger lead going into the Final Jeopardy! segment.

Throughout the game, he kept his finger on the tip of the buzzer, ready to shoot his answer in a split second.

He often hit the buzzer several times for every attempted answer.

Some fans reckon that Yogesh’s buzzer habits could have been to blame for his defeat.

“His buzzer technique was suboptimal and it showed today,” wrote one person on social media.

“He was mashing the buzzer frantically and was quite stressed the entire game.”

Another suggested: “Though his buzzer technique was probably the biggest reason he lost, the competition being top notch also left little room for any errors.”

“Yogesh pounding on that buzzer was painful to watch,” chimed in a third.

Another chimed in: “Not surprisingly, Yogesh’s poor buzzer skill finally ended up costing him. Happy for Katie, who played a very solid game.”

With Yogesh’s time on The Alex Trebek Stage now over, Katie will be back on Tuesday to try and defend her new champ status.

Jeopardy!One viewer said it was ‘criminal’ that host Ken Jennings didn’t ask Jimmy about his hair[/caption]