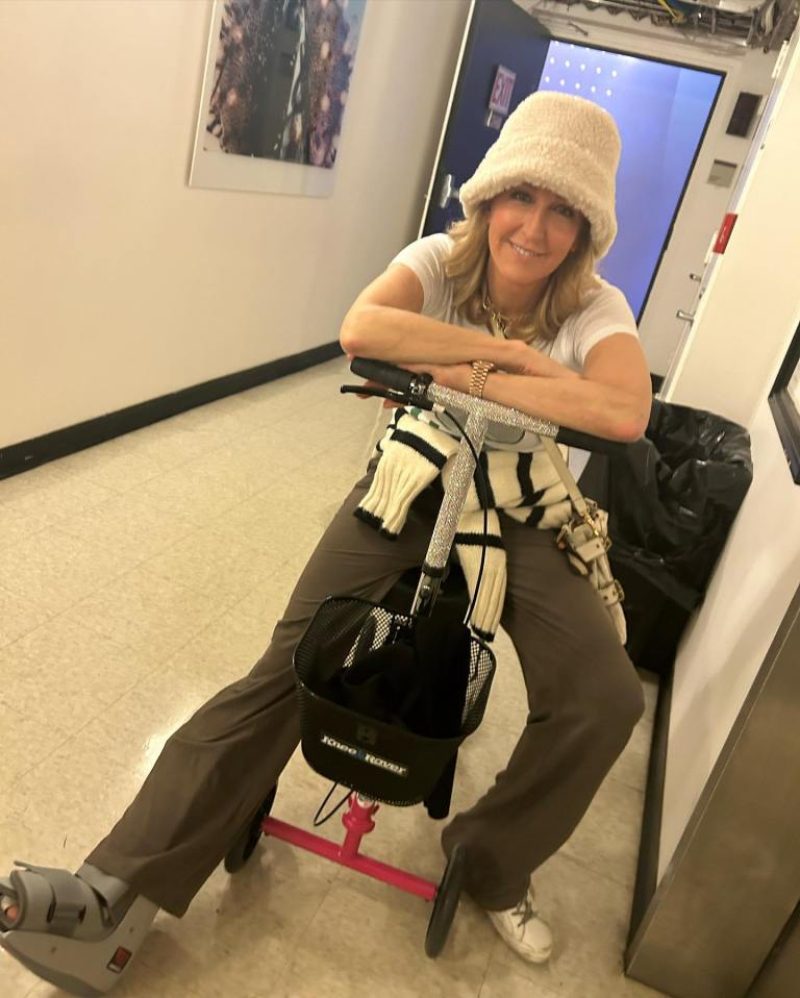 GOOD Morning America host Lara Spencer has shown off her new style in a behind-the-scenes photo.

She rode on her crystal-studded scooter after suffering a scary injury.

InstagramShe has been embracing the new mode of transportation, ever since she broke her foot[/caption]

Over the weekend, Lara posted a photo of herself at GMA to Instagram.

In it, she sat on her pink scooter, which was studded with silver crystals.

The 53-year-old wore a casual outfit consisting of brown pants, a white t-shirt, and one white sneaker.

On her other foot was her bulky cast.

Lara donned a 90’s style outfit, complete with a fuzzy bucket hat and a sweater tied around her waist.

She added a necklace, watch, and over-the shoulder bag to complete her look.

Riding the scooter in a hallway, Lara smiled for the camera.

She showed love to her scooter by captioning the post: “Doubles as a seat while waiting on elevator. Love this thing. #kneescooter #footsurgeryrecovery.”

Lara has been embracing her new ride, as she had posted about it many times on Instagram.

Lara returned to work after Christmas with a big boot on her right foot.

She updated fans on what had happened when they grew concerned for her.

The host  revealed that a torn plantar plate and ligament had been slowly getting worse and worse before she went under the knife.

The mom said that she didn’t want to miss her daughter’s final soccer season or the holidays.

She said: “Rollin into 2023 like… I’m not exactly sure but it should be interesting at work.”

Lara also shared a snap of the scooter that she’s using to get around her home.

She joked that the temporary mode of transport was “sexy” as she showed off her “shiny new wheels”.

When Lara returned to set with her boot and scooter, fans grew even more concerned for her.

During the January 12 broadcast, the star rocked a tight black dress, but it was her footwear of choice that caught fans’ attention.

Plus, despite having a healing foot, Lara still opted for wearing a heel on the other.

One concerned fan begged to know why she would wear any heeled footwear at all right now.

The social media user demanded: “Please tell me @LaraSpencer is not walking on that heel?

“It’s just to look pretty on camera in her boot right????”

Another noted that they’re worried about her having to wear “an ankle boot for the next several weeks.”