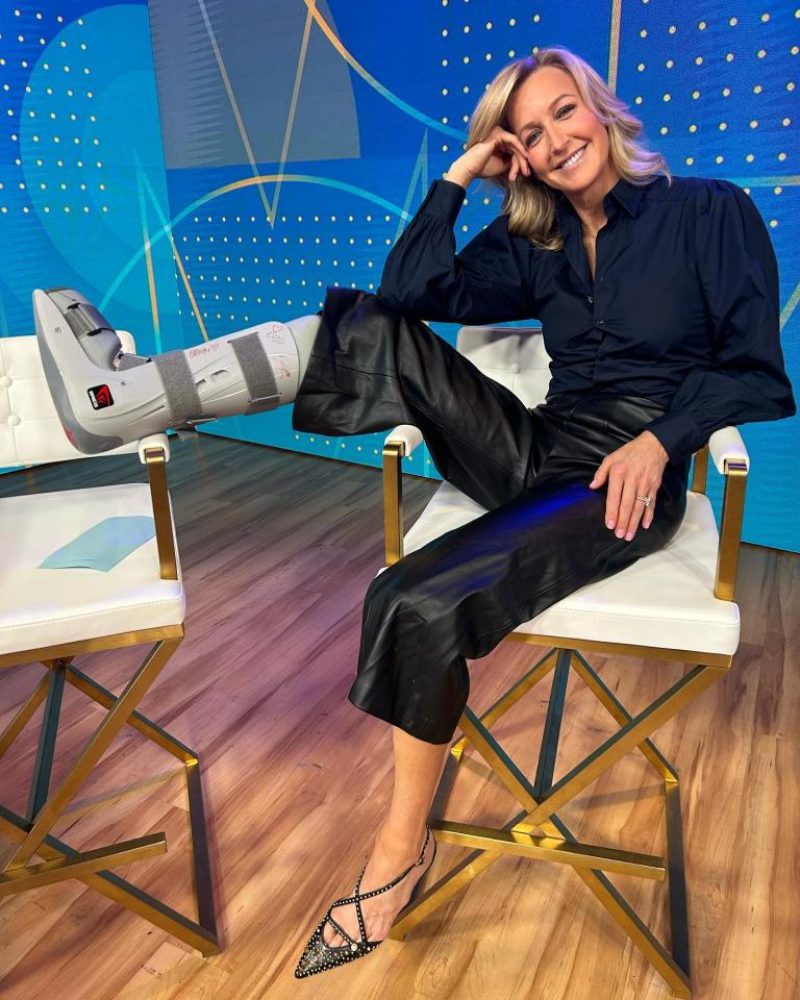 GOOD Morning America host Lara Spencer has flaunted her “tricked out ride” in a new video.

The TV personality, 53, has had to start using a scooter to get around following foot surgery, but she has decided to get it decked out in decorations.

Lara first showed off her scooter last week, but she revealed on Tuesday that it has since gotten an upgrade.

The host has been using the device to help her get around as she continues to recover from surgery on her foot.

To make sure everyone on the set of GMA, and beyond, knows when she’s wheeling through, a pink bell was added to the handlebar.

Lara demonstrated the new addition in a video on her Instagram Story.

Along with the bell, she showed off that blue-and-silver tassels were also added, to add some style points to the scooter.

“You’re on a video, Lara,” the person recording the GMA host told her excitedly in the clip.

The injured TV star was dressed in an all-black ensemble as she rested one knee on the scooter, boot in the air, and kept her heeled foot on the ground.

She was all smiles as she rang the bell on the handlebar multiple times, with the guy filming her screaming, “Woo,” in response.

At the end of the video, Lara fluffed up the tassels to flaunt the shimmery decorations to her fans, as well.

“Check out my tricked out ride,” the GMA host captioned the clip.

Also on Tuesday, Lara shared a behind-the-scenes look of what she’s like “between stories” on the set of GMA.

In the new Instagram picture, the star worked to get comfortable in her hosting chair by lifting up her injured foot to rest it on another chair next to her.

Luckily, the second chair was empty, with the other GMA hosts elsewhere on set.

One fan commented on the photo to cheer the healing host on, telling Lara: “You are a trooper!”

Another wrote: “Hope you get better soon!”

“Prayers for a speedy recovery,” a third follower said.

At the start of the new year, the ABC anchor revealed to fans that she got a foot operation because she had a torn plantar plate and ligament that had been getting worse over time.

Lara actually made a joke while announcing her injury and about wearing a boot soon to GMA, stating: “Rollin into 2023 like… I’m not exactly sure but it should be interesting at work.”

Since then, the 53-year-old has been sharing the process of restoring her health and updated fans on her progress via social media.

She posted about doing physical therapy, with a snap of her laying down and balancing her legs on what appeared to be a large medicine ball.

Another post was a video clip of her doing leg exercises with the instruction of what seemed to be her physical therapist.

PrevPreviousHow many kids does Ciara have?
NextGMA’s Ginger Zee comforts ABC co-star who wanted to ‘crawl into a hole and hide’ after their NSFW slip-up live on-airNext