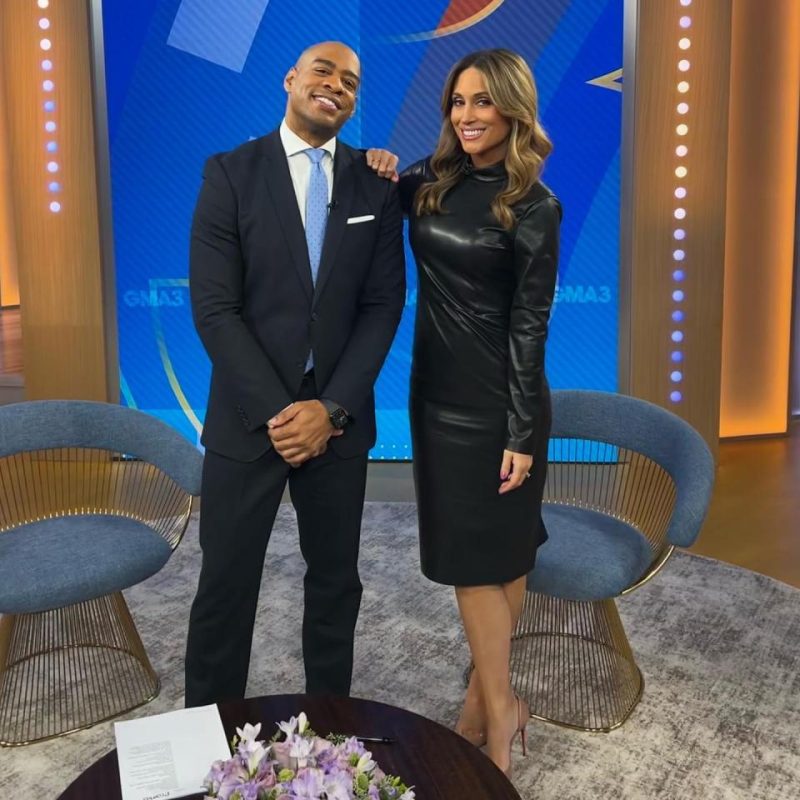 TJ Holmes’ replacement on GMA3 has offered fans a glimpse inside his dressing room and said he was looking forward to the week.

DeMarco Morgan looked dapper in his suit as he posted a backstage shot on his Instagram feed on Monday.

The news anchor and his co-star Rhiannon Ally have been filling in for Holmes and Amy Robach, who were sidelined following their explosive alleged affair.

DeMarco, 44, seemed to be looking forward to the coming days as he posted: “New York – Dressing Room 9. Here’s to another dope week ahead.”

He told fans that he was “grateful” and called for them to tune in every day.

Fans heaped praise on DeMarco as they said he’s been doing a “great” job covering Holmes.

Viewers posted that he has been a “great addition” to the presenting team on GMA3.

One huge fan said: “I love him as TJ’s replacement.”

While another viewer chimed in: Congratulations!! You are doing a GREAT job. We are so proud of you.”

Rhiannon simply posted a bright red love heart emoji in the comments section of the post.

It comes after sources told Page Six that DeMarco may get a permanent gig on the show.

The insider claimed that ABC “loves the job [Morgan’s] doing” and “everyone thinks he’s been really great.”

DeMarco was recently spotted attending a media mixer in Manhattan earlier this month.

He was reportedly spotted with GMA3 executive producer Cat Mckenzie and some local ABC News colleagues.

Sources have claimed that people were “congratulating him and telling him nice job.”

One said: “A lot of [people] were giving him a lot of praise, and he seemed very happy. He was the first to arrive and one of the last to leave.”

DeMarco’s schedule sees him fly in from LA, where he lives, into New York City.

The pair have been off the air for several weeks as the head honchos at ABC conduct a probe.

Robach and Holmes have lawyered up but one source close to the couple said: “It certainly sounds like they are out.“

A second stressed that no decision on their future had yet been made.

Robach has hired powerhouse attorney Andrew Brettler, who confirmed to The U.S. Sun that he has joined her team.

And, Holmes hired Eric George, who did not immediately respond to a request for comment.

Since news of their alleged affair emerged, Robach and Holmes have been seen close together in public.

The couple also smiled and looked cozy during a grocery run days later.

Last month, Holmes filed for divorce from his wife Marilee Fiebig after 12 years of marriage.

And, Robach’s split from her husband Andrew Shue is “almost finalized”, according to PageSix.

PrevPreviousKylie Jenner almost busts out of tiny crop top & miniskirt in new pics – but fans weirded out by ‘uncomfortable’ detail
NextJeopardy! fans swoon over player Jimmy Davoren and are all saying the same thing about one specific featureNext