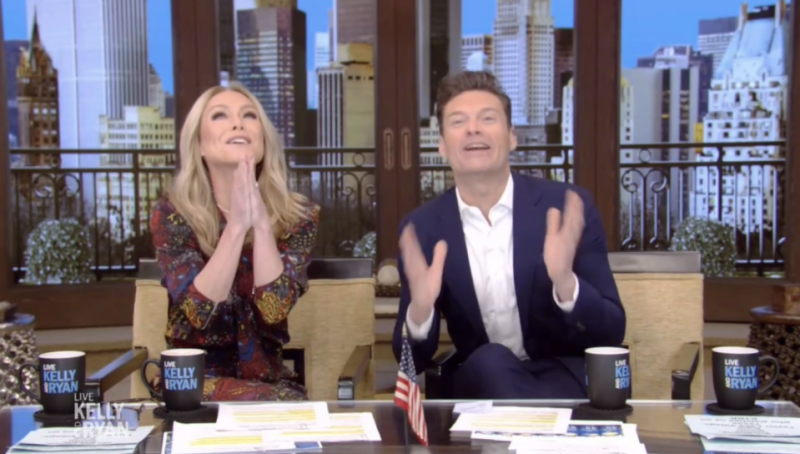 Upon coming back to Live with Kelly and Ryan, she has insisted that her producer had demanded the sick host take time off, just after the show received backlash from fans.

ABCKelly Ripa returned to her Live talk show on Monday[/caption]

After a week and a half of having an on-and-off hosting schedule, Kelly returned on Monday to give fans an update on how she’s been feeling.

She was off for a couple of days due to feeling ill but came back at the start of last week.

Unfortunately, she wasn’t fully feeling better and ended up taking off the back half of the week.

Now, though her voice still a bit hoarse and a lozenge still in her mouth, Kelly shared that she’s feeling much better.

After Ryan Seacrest asked how she was doing, his co-host opened up about being sick and taking time off.

“Here’s the thing,” she began. “…Last week, the better I felt, the worse I sounded.”

Kelly went on: “So, [producer Michael] Gelman was like, ‘You have to leave, you’re a talk show host and you have no voice, there’s no point in you being here.’”

The TV personality said it felt like getting a “snow day” and then it doesn’t snow because she felt “fine” but just didn’t “have a voice.”

Kelly was absent from Live last Wednesday through Friday, after co-hosting the show at the start of the week, despite still being sick.

She was honest about feeling sick and having to have a throat lozenge in her mouth for most of Monday’s episode, and then she appeared on the show with barely any voice that Tuesday.

After watching Kelly host the show like that, fans were furious that she still had to work, even though she was not feeling so great.

Another confuser viewer wrote: “Kelly, @KellyRipa @LiveKellyRyan the voice!?? How are you going to do this!!? Get better soon.”

A third commented: “Who let Kelly Ripa be on air sounding like a chain smoker?”

A fourth fan wondered: “Who thought this was a good idea!?”

It seemed everyone at Live got the message, as Kelly was absent Wednesday through Friday last week, with fill-in co-hosts taking her spot.

The first day, Carson Kressley took on the gig, while Thursday saw the show’s resident DJ, Deja Vu, sitting in the co-host’s chair.

For Friday’s show, actress and author Jenny Mollen filled in for Kelly.

While sick at home, that hadn’t stopped the absent host from still sending some support to the show.

ABCA series of guest co-hosts filled in for Kelly amid her absence, including Jenny Mollen[/caption]