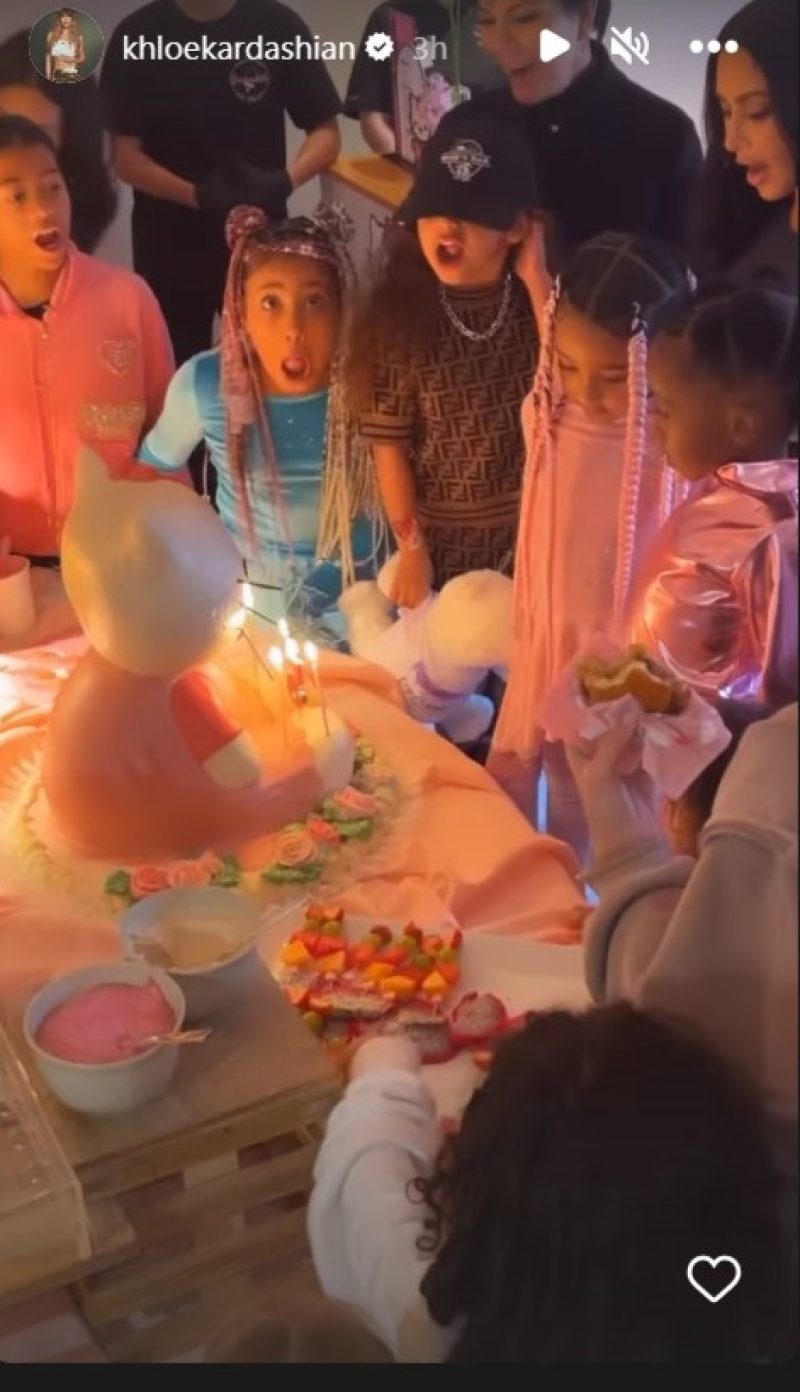 KARDASHIAN fans have been left “in tears” over a video of Khloe’s daughter True at cousin Chicago’s birthday.

The Good American founder shared footage of family and friends singing to Kim’s daughter on her big day.

The SKKN mogul gathered family and friends for a celebration of her daughter Chicago’s fifth birthday on Sunday.

Khloe, 38, and True, four, were among the many guests in attendance and shared tons of footage from the over-the-top bash.

In addition to sweet photos and videos, she captured a very real moment that got fans buzzing and left some feeling sorry for her young daughter.

The fashion mogul filmed as family and friends sang to Chicago.

It appeared, from the clip, that Khloe was holding True in her arms as everyone sang and watched Chicago blow out her birthday candles.

Khloe could be heard behind the camera pleading with her daughter to sing, saying: “True, say ‘yay’.”

True responded by whining, “Mama,” repeatedly before breaking into a full scream-cry.

The video was posted on Reddit, where fans shared their reactions.

The original post was titled: “Lots going on in this video…”

Another commenter wrote: “Anyone else in tears over True at the end of this vid? lol.”

While True seemed upset in the video, she was photographed having lots of fun with other kids earlier in the day.

Khloe snapped photos of the star enjoying the two indoor slides, which led directly into a ball pit, at Chicago’s birthday extravaganza.

Kim, 42, shared snaps from the bash on her own social media as well.

Her home was decorated with pink balloon arches and Hello Kitty balloons throughout, driving home the theme.

Kim kept it casual, wearing jeans and a shirt that read: “Love you, Chicago.”

As for the birthday girl, she rocked a pink long-sleeve dress and had pink braids in her hair.

North West was in attendance, wearing an all-blue ensemble.

Her outfit featured feather details on the sleeves and she also appeared to have colored braids in her hair.

Kourtney Kardashian shared a photo of Chicago’s cake on her Instagram Story, suggesting she was at the party.

Her children did not appear in photos from the bash, however.

Khloe and True appeared in good spirits throughout the bash after a difficult few days for the Hulu star.

Recently, she was seen looking sullen and sad after returning home from her ex Tristan Thompson‘s mother’s funeral.

This isn’t the first time fans have been buzzing about True in recent days.

Days ago, her grandmother Kris Jenner showed off her lavish playhouse on her Instagram Story, leaving fans in shock.

The Kardashian momager showed off the “playhouse” while she thanked a brand for sending her a wreath for the front door.

The playhouse looked to be a Cape Cod-style house with white siding and light blue shutters.

Ivy crawled up the sides of the building and arched around the doorway.

There appeared to be a small flower garden on either side of the playhouse’s front door as well.

Kris hung a massive pink, blue, and white wreath with a large gingerbread person on the door.

The photo was shared on a Kardashian-themed Reddit page, where fans shared their thoughts on the huge house.

The original poster wrote: “Wait, this is True’s PLAYHOUSE?” seemingly alluding to how big the structure is.

Another commenter wrote in part: “That’s so cute.”

Someone else shared: “Yes, Kris bought it for her if I remember correctly. She also bought one for Chicago and Stormi.”

A fourth commenter added that the apparent trio of playhouses is set up “like a little town.”

PrevPreviousKim Kardashian’s daughter North, 9, steals the show at Chicago’s 5th birthday after fans spot ‘change in her behavior’
NextBrie Larson drops jaws as actress poses in just a bra & jeans and shows off her new ‘tattoo sleeve’ in new photosNext