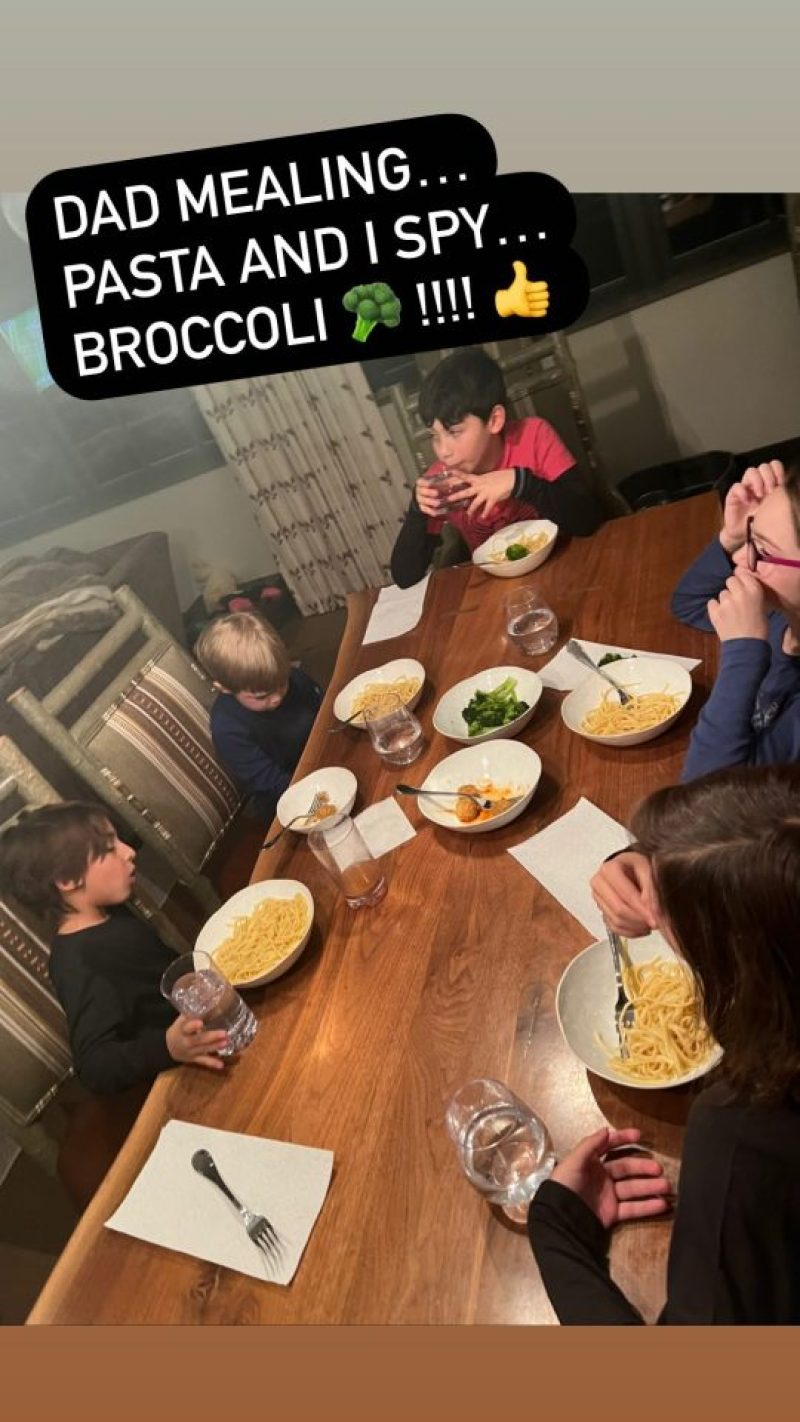 ROB Marciano has shown off his dad skills after cooking dinner for his kids in a new photo.

The Good Morning America weatherman has been co-parenting his kids Madelynn and Mason amid his divorce from his wife Eryn.

Now Rob, 54, has proudly shown off his dad skills in a new photo update on social media.

The TV personality took to his Instagram Stories on Sunday night to share a picture of his two children and friends gathered around the table.

The father of two had prepared a meal of pasta, meatballs and broccoli for the group.

Rob captioned his post: “Dad mealing…pasta and I spy broccoli!” with a thumbs-up emoji.

The GMA star and his wife, Eryn, have been quietly going through a separation since she filed for divorce in June 2021.

Since then, the meteorologist has given rare updates on his co-parenting adventures.

Late last month, Rob posted photos of his children to Instagram, dressed in their pajamas.

He captioned the post: “The kids had a great Christmas with mom and dad successfully teaming up to keep the holiday love and magic alive. Wishing you and yours a happy and healthy 2023.”

In the first photo, his daughter Madelynn, 14, and son Mason, four, sat on the floor and opened presents as they smiled for the camera.

The second snap had them enjoying their surfboards, as they pretended to be on the water in front of their Christmas tree, while a third pic had the kids looking at holiday lights outside.

Back in July, The U.S. Sun exclusively learned that Rob and Eryn have been going through a divorce.

They shared 11 years of marriage and two children together.

Eryn, filed for divorce on June 18, 2021, according to New York court records.

The online court docket confirmed the case remains ongoing, as a Trial Readiness Order was filed in May 2022.

Despite the divorce, the exes took a trip to Walt Disney World with their kids over Spring Break in April, according to Rob’s Instagram.

The real estate agent hasn’t posted of her estranged husband since June 2021 in a Father’s Day tribute.

Over the holiday season, Rob took his kids to a Christmas farm to pick out their tree.

He shared videos and photos of him and his kids celebrating the holidays.

Rob walked around Flurry Fest in Greenwich, Connecticut, and filmed the festivities.

He snapped a photo of his eldest child enjoying a cup of hot chocolate with a candy cane in it.

She also made a Christmas card, and Mason met Santa Claus.

After the festival, Rob posted photos of him and his kids getting their Christmas tree.

Unfortunately, the GMA star had to work during the actual holiday as he battled 14-degree weather.

The beloved meteorologist could be seen completely covered in winter gear while he fought the “bomb cyclone” on live TV.

The cyclone brought winter weather warnings to nearly a third of America’s population.

Marciano also posted a selfie on his Instagram story that gave an inside look at the unprecedented storm.

“Ho Ho Holy Cold,” the Good Morning America host wrote over a photo of himself peeking through a massive winter coat, hat and protective face buff.

The temperature was a painful 14 degrees when the photo was taken.