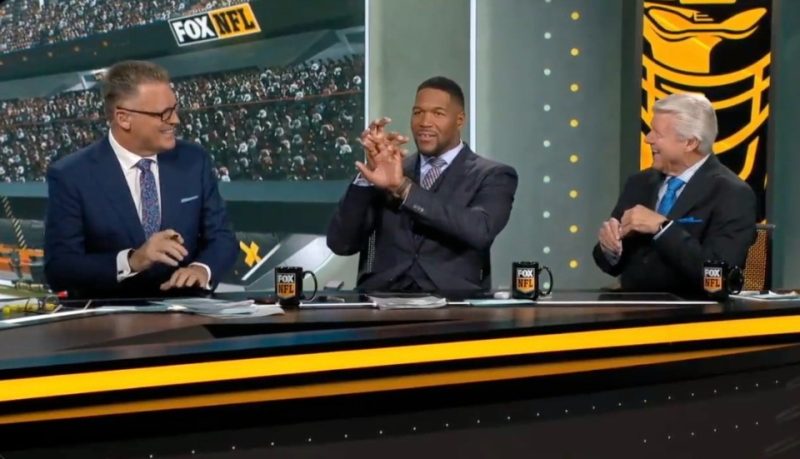 GMA’s Michael Strahan has shared a gruesome moment on Fox Sports Sunday that made both his co-hosts yelp.

Strahan, 51, was speaking with analysts Howie Long and Terry Bradshaw when he broke out the shock demonstration with his fingers.

The former NFL star was proving what years of injuries with the New York Giants had done to his body.

Holding both hands in the air, Strahan began tugging at his pinkie, moving it back on itself.

Squirming in his seat, Bradshaw replied: “That kind of makes my stomach go.”

Strahan has been jokingly showing off his dislocated fingers on air for years, but it still seems to achieve a major shock factor from most.

The TV favorite has previously shown how he can bend his left ring finger completely horizontally and has said in the past he can also bend a few others.

“All my fingers, they don’t really line up from getting bent out of shape,” Strahan said in a YouTube video in 2009.

He explained after tackling people in the NFL, there would be insistences when he would get up and see his finger bent over and would have no choice but to snap it back into place and keep going.

“It’s all from grabbing people. When you’re grabbing somebody, and they try to run, and you try to jerk them,” he said.

“The crazy thing is, you don’t come out of [the] game because of a finger. They would laugh at you. So, you suck it up, they bring you to the side, tape it together and then you go play again.”

In 2016, Straham’s dislocated fingers also caught major attention when he was sitting next to the creator and star of the Broadway musical “Hamilton,” Lin-Manuel Miranda, at a New York Knicks game.

Miranda snapped a picture of Strahan’s oddity and posted it to social media.

Everyone went crazy for the picture at the time as it was one of the first times someone really pointed it out.

“We sat next to Strahan. He is THE BEST. Also, thanks to football, his fingers do THIS,” Miranda tweeted at the time.

It comes after the sporting legend was picked to receive a Hollywood star on the Hollywood walk of fame last week.

He was also the only Fox Sports panel member to predict a New York victory before the New York Giants stunned the Minnesota Vikings in the NFL Wild Card round on Sunday.

Strahan’s Hollywood star will be the first one dedicated to Sports Entertainment.