The View’s Ana Navarro blasts ‘let me finish!’ as co-host tries to cut off her passionate on-air rant 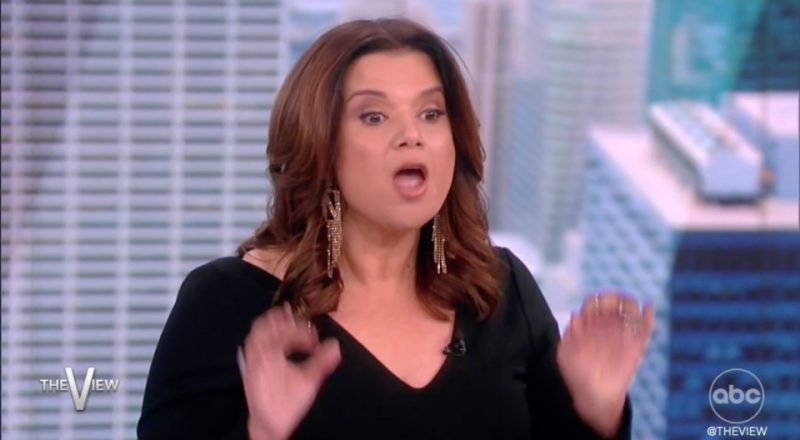 THE VIEW host Ana Navarro has given her opinion on President Biden’s classified documents under investigation and talked over co-host Sunny Hostin as she passionately interrupted.

Joy Behar kicked off Friday’s episode of The View by discussing the heated political topic with the panel and Ana had plenty to say.

Sunny disagreed with Alyssa regarding the timeline of events, and Sara Haines agreed with a point Sunny made on the investigation system.

The audience chuckled as she joked: “These documents are at least six to seven years old – nobody was missing them for seven years.

“Biden could have easily flushed them down the toilet, have his crazy German Shepard eat them, or burnt them in the fireplace – but he didn’t, he self-reported.”

She then continued to compare the similarities and differences between Biden’s and Trump’s classified document investigations when Sunny jumped in to ask: “Where they in a toilet bowl?”

Swatting her hands in the air, Ana exclaimed: “No! Let me finish, no, they weren’t in a toilet bowl,” and then continued her point.

Earlier in January, Ana also snapped at Sara over a tense conversation when actress Rita Wilson, 66, joined The View to discuss the film A Man Called Otto, starring her husband Tom Hanks, 66.

The film explores a cranky old man’s struggles to understand and empathize with his new neighbors.

Rita Wilson discussed the difficulties her parents faced as first-generation Americans growing up with accents, like those Tom Hanks’ character struggles with in the movie.

Ana interjected during her story to offer some insight on the topic.

“Try having an accent and being on TV every day,” she said with a sly grin.

“Well, thank God you are! Because you’re gonna be changing things when people understand that just because you have an accent, it doesn’t mean that you’re a lesser person,” Rita replied.

Ana admitted that she’s often told to “go back to Mexico” because “really ignorant people don’t realize there’s more than one country in Latin America.”

This comment brought on a round of cheers from the host and the audience, who agreed with Ana’s statement.

Sara replied over the thunderous applause: “And she’s Nicaraguan!”

Although this didn’t sit well with Ana and she quickly clapped back.

“Actually, I’m American, and they’re stuck with me,” Ana concluded as the applause swelled again.

Sara apologized and quickly shifted the topic back to the movie they had been discussing.

The previous week, Ana and Sara had another awkward interaction on live TV.

When it rolled around to Sara’s turn, she mentioned she couldn’t take it when people are unable to navigate traffic both by foot and car.

She shouted: “You need to move to the side, you need to motion. You need to realize there are two traffics going both ways. I can’t stand it!”

Sarah asked her co-stars as she stood up at the panel desk and walked over to Joy: “And do you know what I do?”

“I don’t like confrontation so I won’t say something to someone but if I see you walking right at me and you’re not looking I will purposefully bump into you and go ‘Oh!’” she explained while bumping right into the redheaded comedian.

Ana did not appreciate the incident, however, as she had her own reply ready to go.

She said: “Please, don’t bump her like that, she’s fallen off of chairs before.”

Joy did not appear to be bothered as she laughed along with Sara.