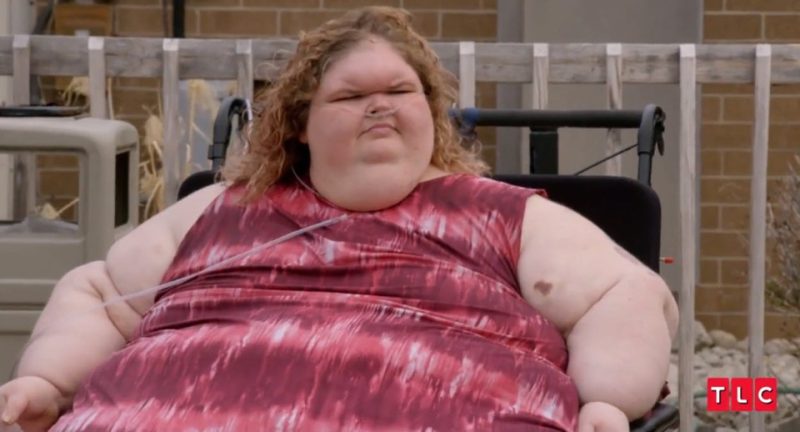 TAMMY Slaton has wowed fans with her body transformation after she shed weight in rehab following her terrifying health crisis.

Tammy’s new husband, Caleb Willingham, recently shared a video of her hard at work in the gym.

Supporters praised Tammy for becoming active and taking charge of her health on a Reddit forum that follows the show.

Another supporter wrote: “I love that she’s finally gotten serious about this and is doing well. I hope she has a long happy life with her husband.”

While a third agreed: “I’m so incredibly happy for her and proud of her. She seems really motivated and it’s great she’s getting this kind of encouragement from her hubby!”

Her weight loss is the culmination of a long journey out of addiction and rehab.

But early last year, Tammy had enough and checked herself into a rehabilitation facility.

In April, she posted a selfie from inside rehab after “disappearing” from her public social media earlier in the year.

In one photo, Tammy showed off a painting as she sipped on a calorie-free Coke Zero.

She looked proud of her artwork, as she held up her painting wearing a black tank top and her hair pulled back.

A close source exclusively told The U.S. Sun the procedure went smoothly and there were few complications.

After the surgery, Tammy returned to her weight rehab center in Ohio to continue her recovery progress.

The source shared that the nurses were: “Monitoring Tammy and making sure she’s staying on her diet after the surgery.

“She has been adjusting well and [her body] didn’t reject her medications.”

Tammy did pick up a few pounds in rehab – in the form of a new husband.

After three weeks of dating, Tammy and Caleb got married at the weight clinic in November.

Previously, The U.S. Sun reported Tammy got engaged in October 2022 to her boyfriend.

An insider close to the TV star gushed: “She began dating Caleb in rehab, and I’m so happy they met in person and were not dating online.”

The source added: “They have a lot of the same struggles that they can share.

“They’ve been a huge support for each other [in rehab], which is awesome.”

As for her future with the show, a friend of Tammy’s exclusively told The U.S. Sun that Tammy has big goals.

Cameras continued to roll while Tammy was in rehab, capturing her weight loss and love gain.

Her journey will play out in the new season of the reality show.

And Tammy’s pal revealed said that Tammy has plans to pursue a book deal.

She wants to tell all about her side of the journey and raise awareness of body positivity.

“There are so many options for Tammy,” her friend said, adding that she fully supports the star on the idea of a tell-all book deal.