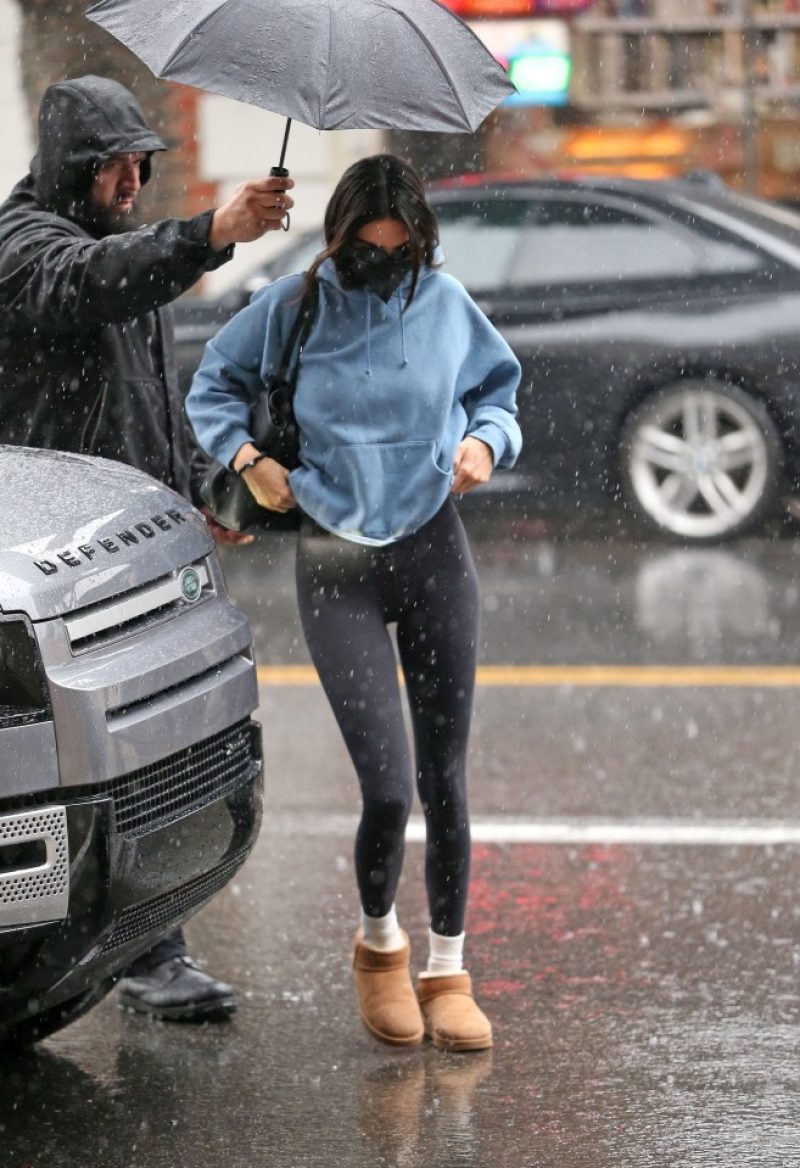 KENDALL Jenner has been ripped by critics for not holding her own umbrella during a rainstorm in new photos.

The reality star didn’t let the dreary weather keep her from her plans in Los Angeles, California, on Saturday.

Photos captured Kendall, 26, walking with a member of her staff shielding her from the rain with an umbrella.

The man, dressed in a raincoat, didn’t look enthused as he attempted to keep the supermodel dry with little covering of his own from the rain.

Kendall sported black leggings and a light blue sweatshirt for the outing though her hood remained down.

She completed the cozy look with a pair of high white socks, slip-on boots, a black purse, and a black face mask.

The photos circulated on a popular Kardashian forum, where users slammed the TV star for seemingly hiring someone to hold her umbrella.

“I don’t care how rich I am but I would feel so bad letting someone hold my umbrella for me while they are getting soaked,” one person commented.

“Agreed! Plus it would be a bit awkward? You would stay more dry just holding it yourself (clearly shown not to be the most practical practice in the second picture lolol),” another replied.

“Yes! I was just thinking how I couldn’t allow someone to hold an umbrella for me because I’m too lazy to hold it myself,” chimed in a third.

And a fourth lashed out: “She really thinks she deserves this treatment,” while one more claimed that Kendall “didn’t care” about her staff taking the brunt of the storm.

Meanwhile, Kendall didn’t seem to mind exposing herself while at Lavo in West Hollywood, California, on Friday.

The runway model donned a sultry black dress with no bra to the venue to celebrate Michael B. Jordan‘s ex-Lori Harvey’s 26th birthday.

Photos captured her daring ensemble, which she also shared with her over 270million followers on Instagram.

The photos came amid rumors that Kendall secretly underwent a breast augmentation, though she’s denied going under the knife.

Kendall’s behavior was again questioned last week after a video resurfaced of her seemingly making rude comments to her sister, Kylie, 25.

The clip was from Kylie’s former E! series, Life of Kylie, which debuted on the network for one season in 2017.

In it, the beauty mogul’s estranged BFF Jordyn Woods, 25, narrated how she was “scared” of Kendall because the sisters “didn’t get along.”

In the same episode, Kendall shaded the Kylie Cosmetics boss for having “really big body pores.”

She said to the youngest Kardashian/Jenner sibling: “Your back pores, I love getting in there on your spray tans…”

When the mother-of-two didn’t find her sister’s remarks as amusing as others in the room, Kendall called her out, saying: “don’t be sensitive.”

In an attempt to ease the tension, the Hulu star complimented her younger sibling on a hairstyle that she had worn, albeit it was quite backhanded.

“I loved your hair yesterday. I love when you’re normal Kylie hair, but then you put like bangs or something,” Kendall said.

Kylie addressed her dynamic with her sister in a confessional interview, explaining they were “just different people” who get along “most of the time” when they’re together.

Fans expressed their irritation with Kendall for “judging” her sister in an online thread.

One fan spewed: “The thing that annoys me about Kendall is she judges her sisters for everything…”

Another fan slammed: “This is why I don’t like Kendall…she is the typical passive-aggressive someone that will make an uncalled-for comment about your physique to make you insecure…”

A third ranted: “Kendall just seems like the type of person who really is stuck in her ways and thinks her way is the right way, so she comes off abrasive. Kylie seems a little more ‘light’ in terms of personality. The kind of person who maybe doesn’t like your way but will just smile and be like, ‘okay cool’ versus making it known that she thinks her way is better…”

Kendall and Kylie are often seen spending time together apart from their older half-siblings: Kourtney, 43, Kim, 42, Khloe, 38, and Rob Kardashian, 35.

The duo jetted off to Aspen, Colorado, for New Year’s with their pals, Stassi Karanikolaou, 25, Hailey Bieber, 26, and her husband Justin, 28.

The getaway was the first for Kylie since splitting with her baby daddy, Travis Scott, 31, earlier that month.

The Mega AgencyKendall recently exposed her bare chest in a sexy black dress while out in West Hollywood, California[/caption]