Inside Colin Farrell’s Hollywood comeback after wild past of downing 60 pints a week, sex tape scandal and A-list flings 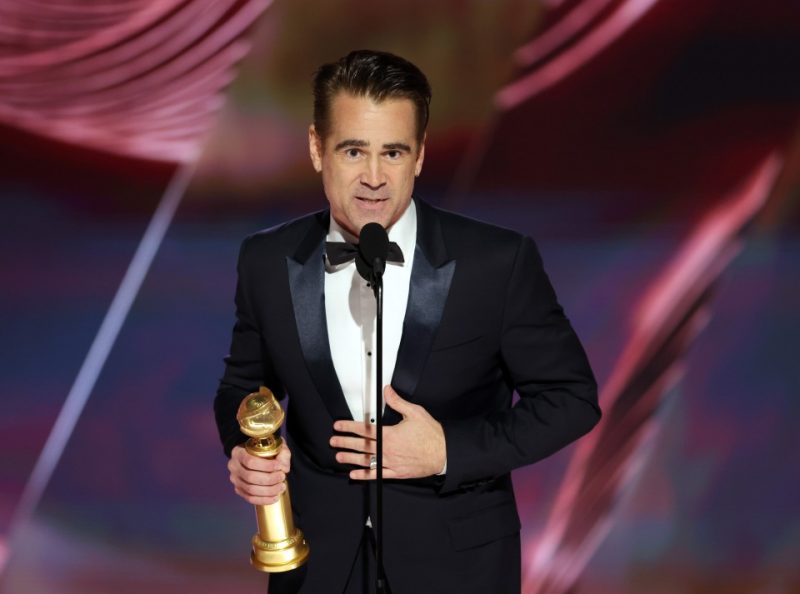 IF they dished out gongs for miraculous comebacks, Colin Farrell might need a bigger mantelpiece.

Flashing a cheeky grin as he picked up his second Golden Globe last week, the Irishman flirted with Bond girl Ana de Armas before giving an emotional acceptance speech.

It was a remarkable return to the top for an actor who was once the poster boy for Noughties Hollywood excess.

Sober and smartly dressed, Colin, 46, bagged the Best Actor gong for the film The Banshees Of Inisherin, and he is now tipped for an Oscar.

He said in his acceptance speech: “I never expect films to work and find an audience and when they do it’s shocking to me.

“So I am horrified by what’s happened around Banshees over the last couple of months in a thrilling kind of way.”

He is expected to land an Oscars best actor nomination next week for his role as Padraic in the dark comedy set in 1920s Ireland.

In the meantime, he has already won over an army of new fans with his chivalrous turn at the Globes, jumping out of his seat to offer an arm to fellow winner Jennifer Coolidge, and gushing over Ana’s “extraordinary” turn as Marilyn Monroe in biopic Blonde after she presented him with his award.

Rewind 17 years, however, and Colin’s career was almost over due to the drink, drugs and womanising which almost claimed his life.

He later said: “You don’t have to have a degree in medicine to know when your body’s shutting down.

“I genuinely didn’t think I had much longer.”

Farrell’s thirst for the party lifestyle began in his early teens in Castleknock, Dublin.

In addition to 40 cigarettes a day, he confessed to doing “20 Es, four grams of coke, six of speed, half an ounce of hash, three bottles of Jack Daniel’s, 12 bottles of red wine and 60 pints” every week.

During one ecstasy-fuelled night in a club when he was 17, Colin was approached by music producer and X Factor judge Louis Walsh and asked to audition for a boyband.

He said: “I was tone deaf. This fella came up and said, ‘I’m going to make this band and it’s going to be huge’.

The band turned out to be chart-toppers Boyzone.

Rejection hit Colin hard but he ploughed on, working as a line dancing instructor while going to acting school.

He dropped out when he was cast as heart-throb Danny Byrne in BBC’s rural Irish drama Ballykissangel in 1998.

Bizarrely, around this time he went travelling in Sydney, Australia, and became a suspect in a murder case.

He couldn’t remember the night in question because of his drug taking but was cleared when his pal produced a diary with a solid alibi.

Colin said: “We were at a party on the other side of town doing ecstasy.”

His gritty role as a US soldier in Louisiana heading to Vietnam won him heaps of praise from critics.

He went on to appear in Minority Report and star in Phone Booth, but soon his rock ’n’ roll lifestyle overshadowed his talent.

He said: “There were a lot of parties in hotel rooms all around the world.

“For years and years I ran up massive hotel bills and I just lived to the full.”

He was also linked to Angelina Jolie, Demi Moore and Britney Spears, fresh from her break-up with Justin Timberlake.

After appearing together on the red carpet for the premiere of Farrell’s film The Recruit in 2003, Britney admitted they kissed — but Colin said: “We’re just mates.”

Britney was said to be furious when he sent her a T-shirt with the slogan: “I slept with Colin Farrell and all I got was this lousy T-shirt.”

In his heyday, Colin was linked to actresses Carmen Electra, Lindsay Lohan and Rosario Dawson — and some older ladies too.

The Crown actress Dame Eileen Atkins, 88, told how Colin tried to get her into bed when he was 28 and she was in her late 60s.

She said: “I was having none of it but it did me the world of good and helped me step lightly into my 70s.”

Colin also confessed he enjoyed a relationship with showbiz royalty Elizabeth Taylor, who died in 2011 aged 79, and how he longed to be her eighth husband.

They had met in hospital where the actress was having a heart operation, but Colin claims the affair was “never consummated”.

In 2002, he had a six-month fling with former Playboy model Nicole Narain.

He later sued her for releasing a sex tape.

The following year, his relationship with model Kim Bordenave produced a son, James, who has genetic disorder Angelman syndrome, which causes problems with speech and balance.

He had another son, Henry, in 2009 with Polish actress Alicja Bachleda-Curus, but the romance was short-lived.

By 2003 outlandish behaviour and controversial comments were catching up with the hellraiser.

In a Playboy interview, he caused uproar by saying how heroin was “fine in moderation” and sleeping with prostitutes was “like ordering a f***ing pizza”.

He was pushed over the edge when he was cast as Alexander the Great in Oliver Stone’s movie.

The poor reviews for Alexander made him consider quitting acting.

The reviews were such a blow that Colin considered ending his life.

He said: “I remember thinking that I’ll go to New York, buy $2,000 worth of smack and rent a bedsit, put black sacks on the window and shoot up until I die.

“The other choice was to change. I was clear about it. I chose the right one.”

Crunch time came in 2006 when he sat at the premiere for his movie reboot of telly cop show Miami Vice and realised he had blacked out for a lot of the filming.

He went to rehab and restarted his career, landing the role of hitman Ray in brilliant 2008 dark comedy In Bruges.

It was directed by Martin McDonagh, who was also behind Banshees.

In his Golden Globes acceptance speech last week, he told director McDonagh: “I owe you so much, man. Fourteen years ago you put me working with Brendan Gleeson, my dance partner, and you changed the trajectory of my life.”

In Bruges was a test for Colin, fresh out of rehab and filming in the booze-filled Belgian city.

He quipped: “Not drinking and shooting in a town that has 467 f***ing beers.

Colin has been steadily working since while staying out of the limelight.

He appeared in indy films The Lobster and science fiction drama After Yang as well as Hollywood hits The Batman and Fantastic Beasts.

After becoming overwhelmed in 2018, he checked in to a £29,000-a-month Arizona rehab clinic to prevent a relapse.

He credits his sons for helping him stay sober, saying: “What my first son James did was allow me to care for something when I couldn’t care for myself. James saved my life.”

He is now thought to be in a relationship with Kelly MacNamara, personal assistant to U2’s The Edge, although they were last seen together in 2021.

He said: “My girlfriend, she travels a lot as well with work, so often times we’re two ships passing in the night, but we make sure to find a port that we can, you know, rendezvous at.”

Now his life looks very different, with health and wellness techniques high up on the agenda.

Now, his new lease of life might earn him the highest Hollywood accolade of all.