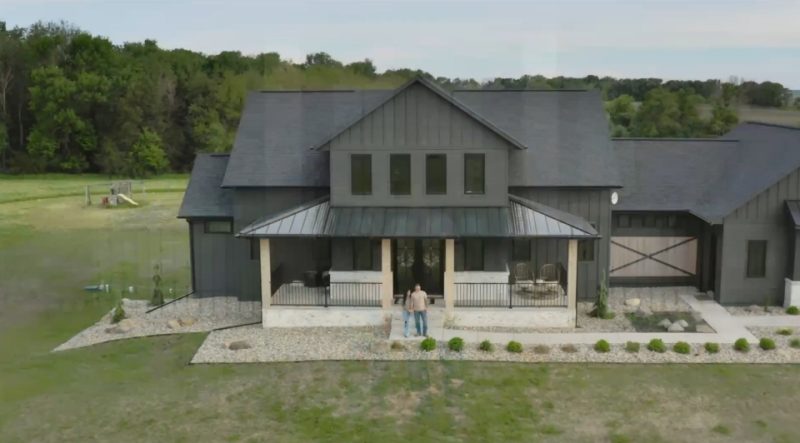 TEEN Mom star Chelsea Houska has been repeatedly ripped over her South Dakota farmhouse and its decor.

The MTV alum and her husband Cole DeBoer are preparing for the premiere of their HGTV series, Down Home Fab, on which they’ll give fans a tour of their home.

A trailer for the home renovation show teases a full look at Chelsea, 31, and Cole’s home.

Fans have gotten glimpses at parts of it in the past and many have been critical of the reality TV star’s style.

The mom of four has a flare for southwestern decor and makes bold design decisions, like using black paint on her walls.

Critics have repeatedly slammed the design, quality, and price of those pieces.

Chelsea seems to ignore the backlash, designing spaces her own way and continuing to proudly show off pieces she likes.

Down Home Fab is expected to feature tons of renovations done her way, further suggesting that she’s unfazed by the backlash.

Here’s a look back at all the times Chelsea was slammed for her “ugly” home decor.

Chelsea and Cole finished construction on their home in 2020.

They gave fans a few glimpses at the exterior, including one in August 2021.

Chelsea shared a snap showing clouds hovering over her farmhouse.

Half of the building appeared to be covered in shadows, due to the black paint.

The caption stated: “This is your sign to paint your house black.”

The post came after Cole went shirtless as he painted some interior walls black as well.

The caption read: “My toxic trait is that I want to paint everything black.”

Another troll wrote: “Bird poop though.”

A third critic chimed in: “Joey is already shaking his head.”

A commentator pointed out: “I don’t think that works when your house is tiny lol.”

InstagramThey have documented the holidays in their home, showing off their decor[/caption]

In November 2022, Chelsea proudly showed off the coffee table and fireplace in her living room.

The mantel was decorated with green garlands on one side and white stockings on another.

On the table, there was a furry white throw, a bowl of decorative pine cones, deer ornaments, books, and antlers.

Critics claimed the decor made the space look “cluttered.”

One wrote: “Why is the garland on half of the mantel? It all looks so ugly.”

Another added: “It’s so uneven and just cluttered looking. Like there’s an animal pelt on the table, it’s all too much just thrown about.”

A third posted: “How is this decor aspirational? It’s somehow both hideous and boring simultaneously.”

“God that has to be the ugliest Christmas display I’ve ever seen,” yet another user complained.

Ahead of Christmas in 2021, Chelsea showed off her festive decor.

Unfortunately for her, fans weren’t feeling it.

The star shared a photo on Instagram overlooking her living room, which was all decked out.

The snap showed the space with two tall trees perched in the corner of the room and other festive pieces throughout.

Each tree was decorated with white lights, ornaments, and beaded garland matching the light color scheme.

Green leaves aligned the mantle over the fireplace with brass bells dangling off the edge, while white stockings were lined in a row for the family of five at the other end.

Chelsea proudly took an overhead shot of the space to share with her followers on her Down Home Deboers Instagram page – the design company she shares with her husband Cole Deboer.

She captioned the post: “Christmas decor and Blippi.,” referencing the kid’s program playing on the TV at the time of the shot.

Upon moving into their home, Chelsea’s husband Cole had one design demand, it seems.

He hung a massive set of antlers on a wall in their home, which fans found appalling.

Chelsea shared a photo of her husband holding the antlers, which were nearly the size of him, on the Instagram Story of their shared account, Down Home DeBoers.

The photo caption read: “Anyone wanna guess where these bad boys are going?!”

The next picture showed their living room, with arrows pointing at the spot for the new addition, a blank white square on the wall next to the fireplace.

She later opened her stories up for questions, where one of her followers asked what animal the horns came from.

She replied with a somber-looking face and a deer gif, although later she added that the animal was actually an elk.

Another fan then asked if Cole had killed the animal himself, to which she answered that the elk actually shed the antlers, and that “no animals were harmed” in the process.

The wall isn’t the only spot in Chelsea and Cole’s home adorned with antlers.

In a 2021 Instagram snap, Chelsea shared a photo of her daughter Layne posing in front of what fans deemed an “oversized dog dish full of antlers.“

The tot looked up at her mom and appeared to be a little shocked by something.

Critics on an online thread worried that the decoration may be a “safety hazard.”

One user wrote: “I just personally wouldn’t have it out with young kids, and it’s ugly.”

A second explained: “It’s not a big deal until a toddler trips and falls face-first into a bowl of antlers. That is a sentence I never thought I’d say or type.”

Another, referencing Chelsea’s youngest child Walker, noted: “This is dangerous, especially with a little little one who will be moving around and doesn’t understand to touch that.”

Others just simply didn’t like the style, calling the antlers-in-a-dish, “terrible,” adding that they’re “so confused by this desert-farmhouse aesthetic.”