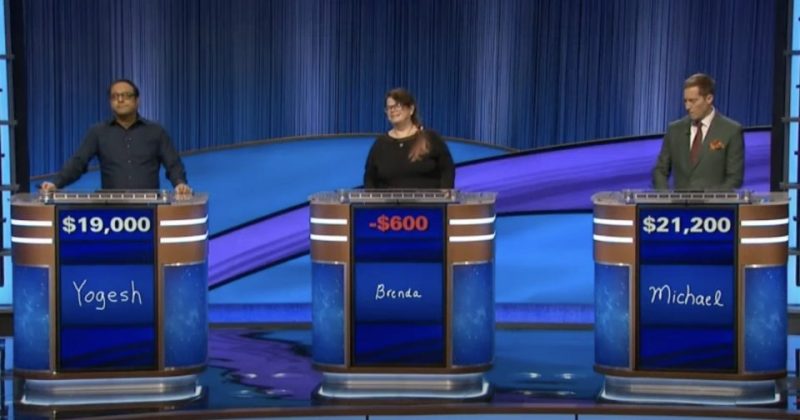 JEOPARDY! contestant Yogesh Raut won his third game on Friday with a cool combined total of $96K – though it sure wasn’t looking that way.

He trailed newcomer Michael Cavaliere up until an “insane” final round for the books, fans buzzed.

ABCBrenda, in the red, was asked to leave the stage going into the close Final Jeopardy[/caption]

Yogesh, a blogger, podcaster, and freelance writer from Springfield, Illinois, put up a huge $75K in his first two games – he’s being dubbed one to watch by Jeopardy! fans.

To finish the week, however, he was given a run for his money that viewers won’t forget anytime soon.

Michael came out swinging and bet “the whole shebang” when he landed on the first randomly placed Daily Double.

He nabbed it and was soaring ahead with more than $10K by the end of the first round.

A bit more robust on the buzzer compared to Yogesh, fans posted as it aired, Michael then landed on the second “Daily Double” and bet $5K.

“Yogesh has not yet passed you,” host Ken Jennings, 48, applauded as the rival contestant had his game face on.

Michael didn’t get it right, losing a crucial amount – but then landed on the last “Daily Double” of the game and won back his $5K in a thrilling display.

“Pay attention” Ken warned them as the show cut to the last commercial break.

As the 30-seconds began and the “Think” theme song played, it was only the two gents, just $2.2K apart, who competed.

Since Brenda – who hilariously revealed she had written Jaws: The Musical during her interview – was in the red, she was asked to leave the stage, which bites.

Under “At The Bookstore” it read: “The name of this author dead since 2013 now appears on books written by a former U.S. marshal & a former Apache helicopter pilot.”

It was hard to ignore that Michael was writing up until the final notes of the Jeopardy! song whereas Yogesh was stylus down.

“Yogesh, in second place for the first time,” Ken began turning to the reigning champ to see what he wrote.

Ken took a moment to observe: “You have the lead by a buck.”

Michael looked stunned and seemed to voice “wow” as Ken turned to him and at that point, was behind by $1.

“You looked at this for a long time sir,” Ken admitted.

Michael was defeated and Yogesh prevailed – in just the last clue.

“The 3-day curse is broken!” Ken concluded, as Yogesh wiped the sweat from his forehead and the crowd went wild.

One viewer wrote on Reddit after the unusually close match: “AHHH! Michael played brilliantly but when it took him until the last second to write his FJ response I got a sinking feeling.”

“Two great players! What a match,” wrote a second.

Another wrote: “What a nailbiter of a game. Yogesh has been three for three on the Final Jeopardy.

“The buzzer is seeming to be his big weakness. We’ll see if a new taping day makes him better or worse.”

A fourth simply put it: “What an absolutely insane game.”

And a fourth: “My gosh Michael played an extremely dominant game. If not playing Yogesh I’m sure he’d have been a multi-day winner.”

Ken referred to the lifting of the “3-day curse” since there have been only two-dayers since the beloved Ray LaLonde recently lost.

There was Lloyd Sy, who beat Ray after 13 wins, and then Patrick Curran, who beat Lloyd – both going down on their third bout.

He flexed that he knew and beat James Holzhauer at high school trivia in his promising first game.

In his second episode, he responded to a clue about the Statue of Liberty by using its original name “Liberty Enlightening the World” leading Ken to call him a “show off!”.

Yogesh has made it no secret he’s a big wig in the trivia world and despite his buzzer technique – which sees him gripping the device with two hands or holding it out quite far – he’s winning big.

Mayim will be returning in late February which is later than was first announced given her Call Me Kat schedule has “evolved,” starting with a tournament for college students as the show itself evolves into its super-champ era.

While she is hosting that, fans will still get more Ken as he is hosting the new Jeopardy! Masters spinoff in primetime which is said to be coming in spring.

ABCHe missed the last clue and otherwise, would have won, making for an ‘insane’ episode[/caption]