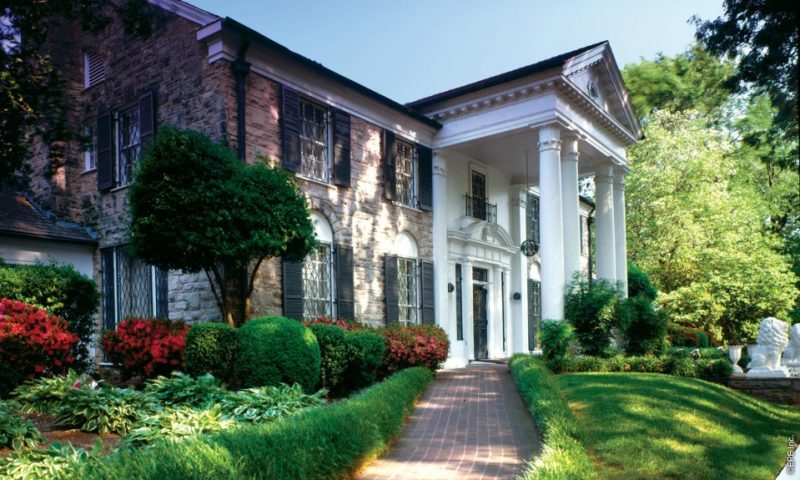 GRACELAND serves as a symbol of the home and the heart of the Presley family – and Elvis still reigns as King.

The iconic mansion immortalizes the rock ‘n’ roll legend, hence why his beloved daughter Lisa Marie spent so much time there.

GettyElvis’ only child continued to call the 13.8-acre estate home before her shock death[/caption]

After her sudden death on January 13, she will be laid to rest alongside her father, son Benjamin and her grandmother.

She will be buried in Graceland’s Meditation Garden – marking the perfect place for the family-orientated former singer.

The 54-year-old took solace in the 13.8-acre estate after heartbreaks and hardships – but also during the holidays.

Lisa Marie made no secret of her love of the “very special” property that she was reared in and still called home.

The late star lent on the mountain of memories from her childhood to keep the Presley family traditions alive.

One of her favorite things to do was explore the sprawling grounds with her four children, recalling laughs she shared with her loved ones in her early years.

She still visited the luxury property regularly to “do things that Elvis and her used to do”.

Graceland archivist Angie Marchese gave an insight into her childhood before she moved to California with her mother Priscilla when her parents divorced in 1972.

Jailhouse Rock singer Elvis bought the home and grounds – previously owned by the S.E. Toof family – in 1957 at just 22.

She told how The King would take his only child to ride golf carts across the vast estate and pet his beloved horses when she visited him.

“They do come quite often,” Angie previously said during a live stream discussing Graceland. “This is still her home.”

The concrete museum of the Presley dynasty serves as a reminder that they were still mere mortals – albeit with a remarkable musical gift.

But other areas of the home then prompt fans to remember Elvis was an extraordinary man – and Lisa Marie lived with him.

Souvenirs of his spectacular life remain littered around the mansion, providing an insight into his amusing personality.

He brought in a rigged pinball machine called Knock Out around 20 years after moving into Graceland, to easily trump his pals and the Memphis Mafia alike.

The set of bongo drums he gave to Priscilla shortly after they met in Germany remains on display, while Lisa Marie’s toys are also exhibited.

And the ultimate testimony of Elvis’ love for his daughter is also housed there – the Convair 880 jet he named after her.

It is no wonder Graceland is the place Lisa Marie truly felt at home, surrounded by her family treasures.

After being opened to the public in 1982 and becoming the second most visited private house in America, it’s hard to believe the inner workings of the house still function.

But the mom-of-four ran a tight ship after inheriting her father’s estate.

Elvis expert Angie continued: “The kitchen appliances do work. They’re turned off for fire safety, but they do still work.

“And when Lisa Marie and her family are here, we fire them up and sometimes they’ll have dinner here in the mansion.”

When the tours wrap up, she and her loved ones would clamor around huge the dining table for family dinners.

They even occasionally left an empty seat on the end in honor of Elvis.

But Lisa Marie‘s favorite excuse to get together was the Thanksgiving holiday, so she could be with her nearest and dearest.

In an earlier interview with USA Today, she described the comfort she felt while staying at the “very special place.”

“It shuts down quite nice at night, she said.

“I have family that I love very much who live there in Memphis. When I go, I visit Graceland. We have dinner there.

“My family still goes there, and we still have a life there. I have stayed there overnight in the past.

She went on to sweetly gush about a dinner she had penciled in with her family at Graceland.

Her favorite china is still stashed in her Aunt Delta’s former bedroom in the $500million mansion.

Lisa Marie was the sole owner at the time of her death – suggesting her kids will inherit the Presley’s prized possession.

She sadly suffered a cardiac arrest at her home in Calabasas, California, just two days after her appearance at the Golden Globe Awards.

GettyLisa Marie loved to host family dinners at Graceland. as well as Thanksgiving[/caption]

GettyOver 500,000 people flock to Graceland each year to see how The King lived[/caption]

GettyLisa Marie loved to host family dinners at Graceland. as well as Thanksgiving[/caption]