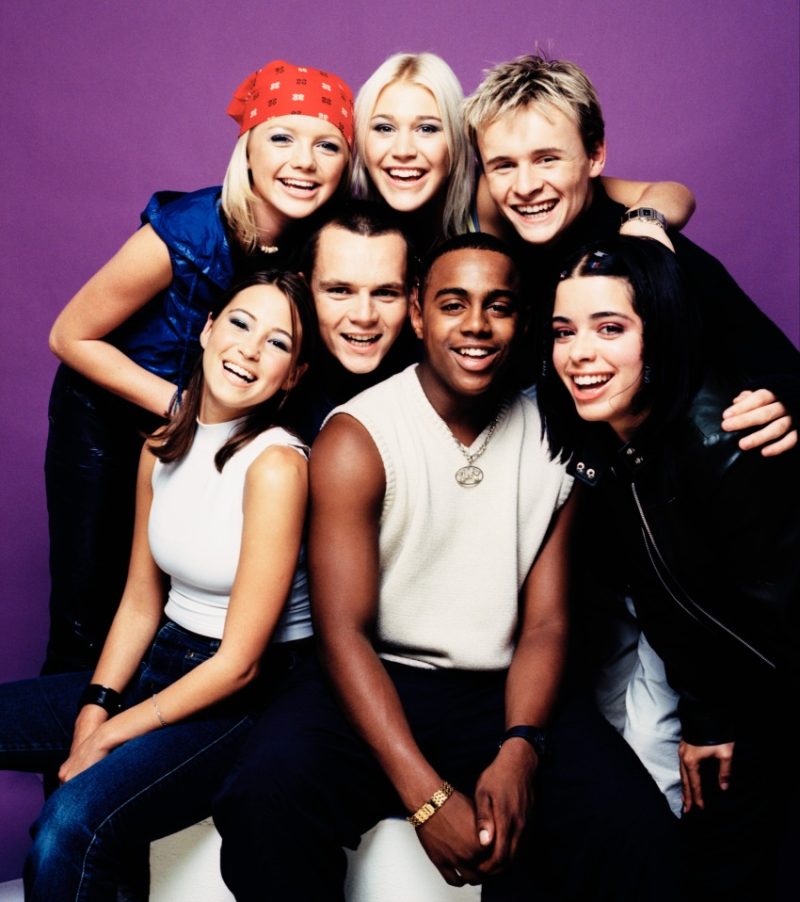 PAUL CATTERMOLE is now a tarot card reader and Tina Barrett has moved back in with her mum.

Jo O’Meara is only just returning to her feet after back ops.

S Club 7 are back with new shows in the summer, but what have they been up to since the original band split?Getty

But the S Club 7 favourites, huge hitmakers in the late Nineties and early Noughties, are re-uniting in their forties for summer shows alongside their old band-mates Hannah Spearritt, Jon Lee, Bradley McIntosh and Rachel Stevens.

Hits including Bring It All Back and Don’t Stop Movin’ made the band Brit Awards royalty.

They sold ten million albums and made a film and their own TV series before splitting in 2003.

Some of them later reformed as S Club All Stars and they all did a 2015 tour.

Andrew Buckwell reveals what else they have been up to.

BRAVE Jo is returning to the spotlight after back operation agony.

She underwent several procedures last year to remove part of a slipped disc and feared they would stop her ever dancing again.

Jo has also had to overcome an addiction to fruit machines that she admitted: “Became a bit of a thing.”

She added: “With the band, it was so busy and so hectic.

“I just used it as a bit of escapism to run away with myself for a little while.”

After the group split she signed with manager Simon Fuller.

An album in 2005 failed to get sales despite good reviews.

Jo, 43, appeared on Celebrity Big Brother in 2007, where she was accused of racism and bullying towards Indian actress housemate Shilpa Shetty.

She later said of the ugly bust-up: “I lost my career. I lost my home. I lost ­everything and I’m still trying to rebuild today.”

Over the years she has continued to perform.

She was in S Club All Stars until 2020, recorded a solo album during lockdown and still plays gigs.

Next month she will perform a set at Pizza Express in central London, with ­tickets costing £30 a head.

Her performing arts company CJL Arts Limited is £5,386 in the red, according to the latest accounts.

Olivia WestHannah has been in Death In Paradise, sci-fi series Primeval, Casualty and EastEnders, as Kandice Taylor[/caption]

MAYBE it is no surprise Hannah turned to acting, as she once admitted: “I’m not that good a singer. We mimed.”

The 44-year-old has been in Death In Paradise, sci-fi series Primeval, Casualty and EastEnders, as Kandice Taylor, quitting in 2018 after becoming pregnant with the first of her two kids with nutritionist Adam Thomas.

Hannah, who was once engaged to S Club 7 co-star Paul, had a boob job in 2013 which led to three years of medical issues before the implants were removed.

She now calls herself a holistic lifestyle coach and will soon open the Earth And Fire Cafe in Twickenham, South West London.

Jon, 40, says: “I’ve been lucky, I’ve been in the right place at the right time. But I don’t get recognised any more – I walk very quickly!”

He also appeared in BBC ­hospital drama Casualty and in 2008 voiced a character in animated Disney series ­Famous 5: On The Case.

INSTAGRAM/RACHEL STEVENSOnce named the sexiest woman of all time, 44-year-old Rachel made two albums after the band split[/caption]

RACHEL is an Instagram influencer who promotes fashion labels including Oasis and Next to her more than 300,000 followers.

Once named the sexiest woman of all time, the 44-year-old made two albums after the band split.

The second won impressive reviews but that failed to translate into sales.

TINA eagerly teased on social media this week: “Announcement coming soon” – and for the struggling single mum the group reunion could not come at a better time.

After the band her 2004 cover of Rod Stewart hit Do Ya Think I’m Sexy, with Natasha Bedingfield and Atomic Kitten’s Liz McClarnon, was slated.

She released solo single Fire in 2012, then Make Me Dance and All Fired Up.

She has also been in theatre shows and joined S Club All Stars with some of her old bandmates.

Tina, 46, is now single after splitting with partner Paul Cashmore, a star of Channel 4 reality show Hunted, and has moved in with her mum Cheryl in West Sussex following the death of her father.

He has more than 12,000 subscribers on YouTube channel Ask The Answer.

He says: “I am very lucky to have the gift of spiritual healing.

“My predictions can be incredibly insightful and I have an innate sense of what makes people tick.”

Paul, 45, has also worked as a radio station manager in Swanage, Dorset, where he lives,  and was reportedly turned down after asking to go on Celebrity Big Brother, Strictly Come Dancing and Dancing On Ice.

He formed Skua, a nu-metal group, but failed to make it big.

In a recent interview he complained S Club 7 had not been properly rewarded for their efforts, claiming others had enjoyed the spoils of their success.

HE always loved “having a party and getting on stage” and has remained connected to the music business in whatever way he can.

Bradley, 41, was part of boyband Upper Street, formed in 2006 from MTV reality TV series Totally Boyband with ex-members of other groups, but it failed to take off.

Two years later he teamed up with Jo O’Meara and Paul Cattermole to form S Club All Stars, playing clubs and universities.

Tina Barrett joined in 2014 but Bradley then left the next year, and in 2020 Jo left and Stacey Franks arrived.

It was hit hard by the pandemic and has reserves of just £90.