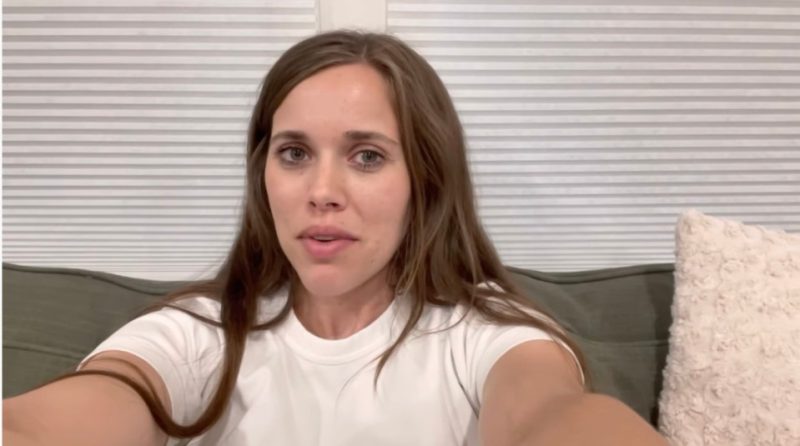 JESSA Duggar has sparked chatter that she’s expecting her fifth child after fans noticed a telling detail in a new video.

The reality star raised eyebrows after she appeared in her pregnant sister, Joy-Anna‘s YouTube video.

Instagram/@jessaseewaldJessa is already a mom to four kids with her husband, Ben Seewald: Spurgeon, Henry, Ivy, and Fern[/caption]

On Friday, the Counting On alum took to her vlog to share footage from her week spent with family and friends.

At one point, Jessa, 30, was captured in the video as the Duggar sisters – including rarely-seen Jana, 33 – enjoyed lunch together at a restaurant with their kids.

The outing followed with a trip to the nail salon, where the girls’ got pampered with manicures and pedicures.

However, fans’ attention drew toward Jessa as some thought the young mom was trying to hide a baby bump.

Screenshots from the video were shared on an online thread showing Jessa sporting a loosely-fitted brown sweatshirt and seemingly blocking her stomach with her purse.

One eagle-eyed fan pointed out the suspicious placement of her bag, starting the discussion: “The ol’ purse in front of the stomach trick? Coincidence or #29?”

Others agreed that the move might have been on purpose, with another writing: “The 2x-sized baggy sweatshirt only adds to speculation that she is pregnant.”

A third chimed in: “It’s about the right time for her. She has one every two years.”

Jessa is already a mom to four children with her husband, Ben Seewald, 27: Spurgeon, seven; Henry, five; Ivy, three; and Fern, one.

But this isn’t the first time fans have theorized that another baby might be on the way.

Earlier this month, fans questioned whether Jessa was pregnant after noticing that she hadn’t posted on Instagram since late November.

The TLC alum was previously active on her social media accounts until the hiatus, leading some to wonder if it was due to a pregnancy.

Several took to a popular Duggar forum to discuss the potential for another Seewald baby.

“Jessa’s continued absence on social media – Her last post was November 21. She missed Thanksgiving, Christmas, and New Years. Is she just taking a break?” one wrote, opening the conversation.

“I’m wondering if she WAS pregnant. I feel like the last time she was this MIA was when she miscarried after (?) Ivy? There was that whole bee-themed photo shoot she never posted photos of,” a second speculated.

A third remarked: “I’m thinking she’s pregnant like others have said. Hopefully she will announce soon, I want to know what name she’ll come up with this time.”

And a fourth wrote bluntly: “Pregnant.”

However, others weren’t sure a fifth baby was on the way just yet.

“Not disagreeing with you, but I just don’t see why pregnancy would be a reason to stop posting. Why miss out on sponsorship opportunities etc for months just for the sake of keeping a fifth pregnancy a secret?” someone else argued.

“Pregnancy maybe but could her and Ben be going thur marital issues especially stemming from Jinger’s book. Plus maybe Ben’s church has said something too about her social media,” a final mentioned.

Rumors of Jessa and Ben’s supposed fifth child began when fans believed they spotted a bump underneath her dress in a holiday decorating video late last year.

Meanwhile, Joy-Anna, 25, and her husband, Austin Forsyth, 29, are expecting their third child to join kids Gideon, four, and Evelyn, two.

Jim Bob and Michelle‘s son, Jed, 24, and his wife, Katey, are also awaiting the arrival of their second child.

And his twin brother, Jeremiah, 24, welcomed his first child with his wife, Hannah, 27, on Christmas Day.