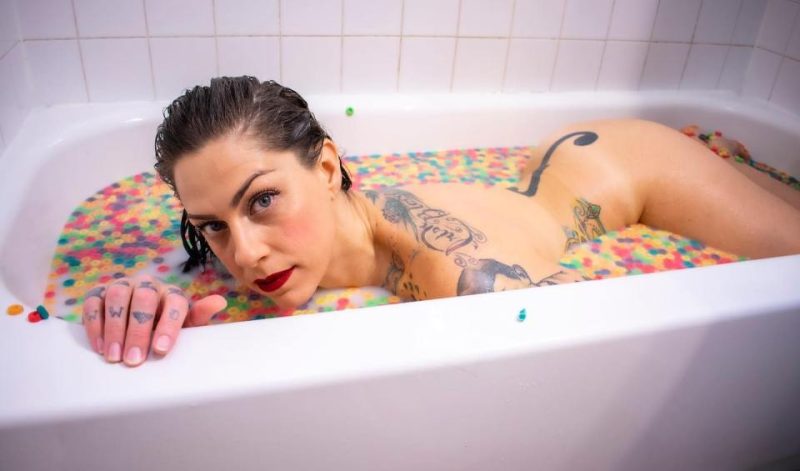 Danielle, 47, stunned her fans with her sexy Instagram photo.

The American Pickers star ditched her clothing and took a dip into a white tub.

With her hair soaking wet, the History Channel notable showed off her tattoos and perked up her booty at the camera.

She appeared to be swimming in a tub full of rainbow-colored chips.

Danielle asked her followers: “Who’s ready for a midnight snack?”

This is not the first time the American Pickers hostess has shared a risque snapshot on social media.

Danielle recently posted a spicy video to her TikTok account.

While showing off pieces from her vintage closet, she donned a red bikini thong with silver fringes.

She completed the sultry look with a fringed paisley shawl, which left little to the imagination.

While strutting around in fishnet stockings and suspenders, the TV star twerked and teased the massive tattoos on her lower back.

Danielle captioned the post: “I’m finally finishing up sewing the fringe onto these bottoms!

“Tage me in your hand-sewing projects.”

While Danielle has been on the road to recovery from her hysterectomy operation in October, viewers recently saw her on the 24th season premiere of American Pickers.

Co-hosts Mike and Robbie Wolfe joined her as they competed against  White Stripes frontman Jack White, 47, in a contest.

Unfortunately, The U.S. Sun reported that the season 24 premiere ratings were down as only 943,000 viewers tuned in, according to SpoilerTV.

Viewers eventually tuned out towards the end of season 23 as ratings dipped to 829,000 watchers for the August 27 episode.

The ratings have not been the same since former host Frank Fritz was fired from the popular show in 2021.

Amid their boycott, fans turned to social media and demanded their fan-favorite host back on their TV screens.

Although Frank suffered from a debilitating stroke in July 2022, Mike gave hope to fans that the ex-host could return to the show.

While visiting Washington, D.C., Mike told the Capital Paparazzi in December 2022: “Frank and I are friends.

“He was just at my brother’s graduation for his kids right before he got his stroke.

“If anybody’s thinking about Frank, they should be praying for him.”

When asked about Frank’s return, Mike shared: “I would hope he’s gonna be back on the show, but right now, he needs to get healthier.