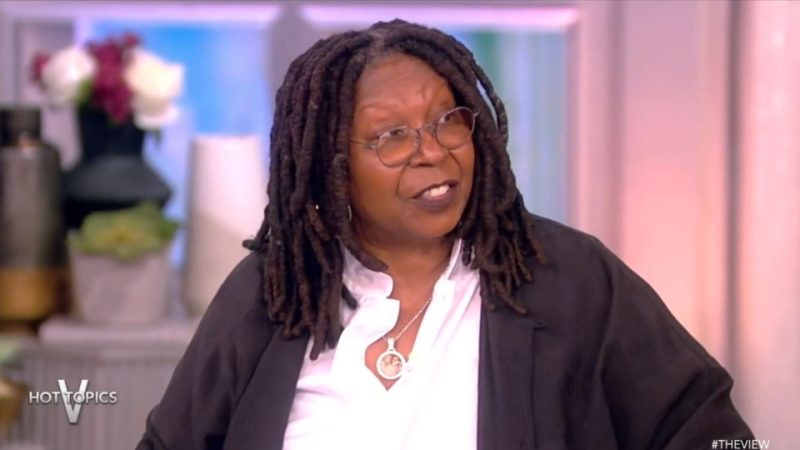 THE VIEW’s Whoopi Goldberg has insisted that “nobody’s luckier” than she is to have her hosting gig after fans have demanded she be fired from the show.

During Thursday’s episode of The View, Whoopi discussed her role as Miss Willa on the series Godfather of Harlem.

She joked: “I like to have some fun sometimes, I’m happy to be doing that.”

Co-host Joy Behar asked “Is this not fun for you?” as she referred to Whoopi’s role on The View.

The 67-year-old may have been referencing this fact when she expressed her gratitude for remaining as The View’s moderator.

On Thursday’s episode of The View, Whoopi mocked co-host Joy Behar for her outfit.

Whoopi and the other hosts ruthlessly made fun of Joy’s ensemble, saying she looked like Beetlejuice or Cruella de Vil.

Whoopi tried her best to hold laughter in while looking at Joy after she sat down at the desk.

Joy wore a black shirt and black pants with a black and white striped blazer.

“Joy,” Whoopi began, as the pair began to laugh.

“Didn’t you try to sell me some sneakers?” Whoopi asked. “At Foot Locker.”

“I don’t know how anyone can see your shoulders through the stripes,” Sara remarked.

Earlier this week, Whoopi Goldberg called out Sunny as the co-host interrupted the show’s moderator in an awkward live moment.

Whoopi, 67, offered her thoughts on the current topic on The View, a political discussion, when she suddenly paused for a beat.

Sunny could be heard speaking very softly in the background while Whoopi was mid-sentence.

She then asked: “How does it look, sharp?” as she spoke to the show’s producers.

Confused, Whoopi looked toward her co-host, asking “You alright?”

A flustered Sunny replied: “I’m being told that we have a picture that I want to call up,” referring to a photo she wanted Whoopi and the others to see.

The photo soon appeared on-screen and the frazzled moderator continued her discussion with Hostin.

No one discussed Sunny’s odd interruption further, nor did Sunny explain why she needed to discuss the photo while Whoopi was speaking.

Co-host Joy Behar asked Whoopi if hosting The View was not fun for herABCWhoopi clarified that hosting The View is fun, but Godfather of Harlem is ‘REALLY fun’ABCThe host then got serious and said that nobody in television is luckier than she is to have her hosting gigABC