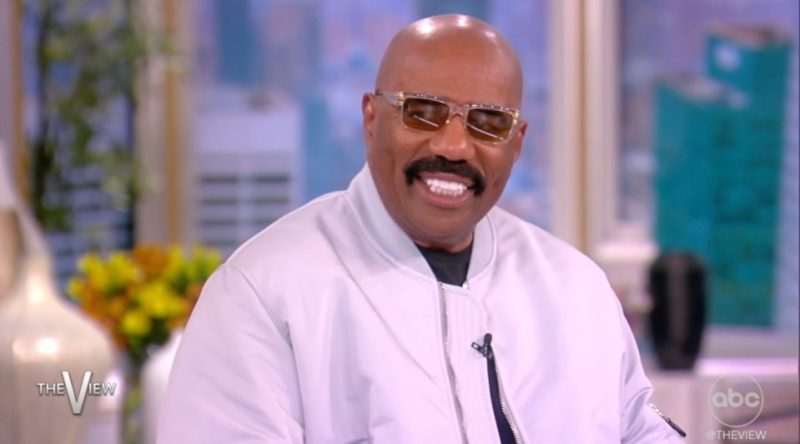 THE VIEW fans have mocked guest Steve Harvey as the Family Feud host wore a “strange” accessory for the live talk show.

Steve, 65, walked out to thunderous applause clad in a gray jacket and dark sunglasses to top it all off.

Family Feud host Steve Harvey joined The View as a guest ahead of his 66th birthdayABCWhen he came out on stage, he was wearing a pair of dark sunglasses in addition to a gray jacketABC

As he settled into his chair, the crowd continued to cheer while Steve greeted everyone.

Steve replied: “66,” as the hosts cooed and wished him a happy birthday.

While Steve filled Whoopi and the rest of the hosts in on what he’s been up to, viewers on Twitter mercilessly mocked the guest for his strange choice of attire.

Another shared their opinion: “Steve need to take glasses off! IJS #TheView”

One fan agreed with Steve that he looked good, but the shades weren’t necessary.

“He open casket sharp,” they said, “but why doe? maybe their [sic] the auto tint ones”

Then, one fan simply said “Steve’s glasses #TheView,” summing it all up in a couple of words.

Meanwhile, Whoopi had something important to share in a recent episode.

She insisted during Thursday’s episode of The View that “nobody’s luckier” than her to have her gig.

Whoopi discussed her role as Miss Willa on the series Godfather of Harlem.

“I’m really glad to get the gig,” she said of appearing on the show.

She followed up with: “I like to have some fun sometimes, I’m happy to be doing that.”

Co-host Joy Behar seemed confused, asking “Is this not fun for you?” as she referred to Whoopi’s role on The View.

Earlier this week, Whoopi Goldberg called out co-host Sunny Hostin as the co-host interrupted the show’s moderator in an awkward live moment.

Whoopi, 67, offered her thoughts on the current topic on The View, a political discussion, when she suddenly paused for a beat.

Sunny could be heard speaking very softly in the background while Whoopi was mid-sentence.

She then asked: “How does it look, sharp?” as she spoke to the show’s producers.

Confused, Whoopi looked toward her co-host, asking “You alright?”

A flustered Sunny replied: “I’m being told that we have a picture that I want to call up,” referring to a photo she wanted Whoopi and the others to see.

The photo soon appeared on-screen and the frazzled moderator continued her discussion with Hostin.

No one discussed Sunny’s odd interruption further, nor did Sunny explain why she needed to discuss the photo while Whoopi was speaking.

Fans ruthlessly mocked the host for wearing the ‘strange’ accessory on airABCThe View’s hosts didn’t seem to mind as Steve wore the glasses throughout the entire interviewABCHe did not comment on the fact that he wore them or that perhaps they were, in fact, Transitions lensesABC