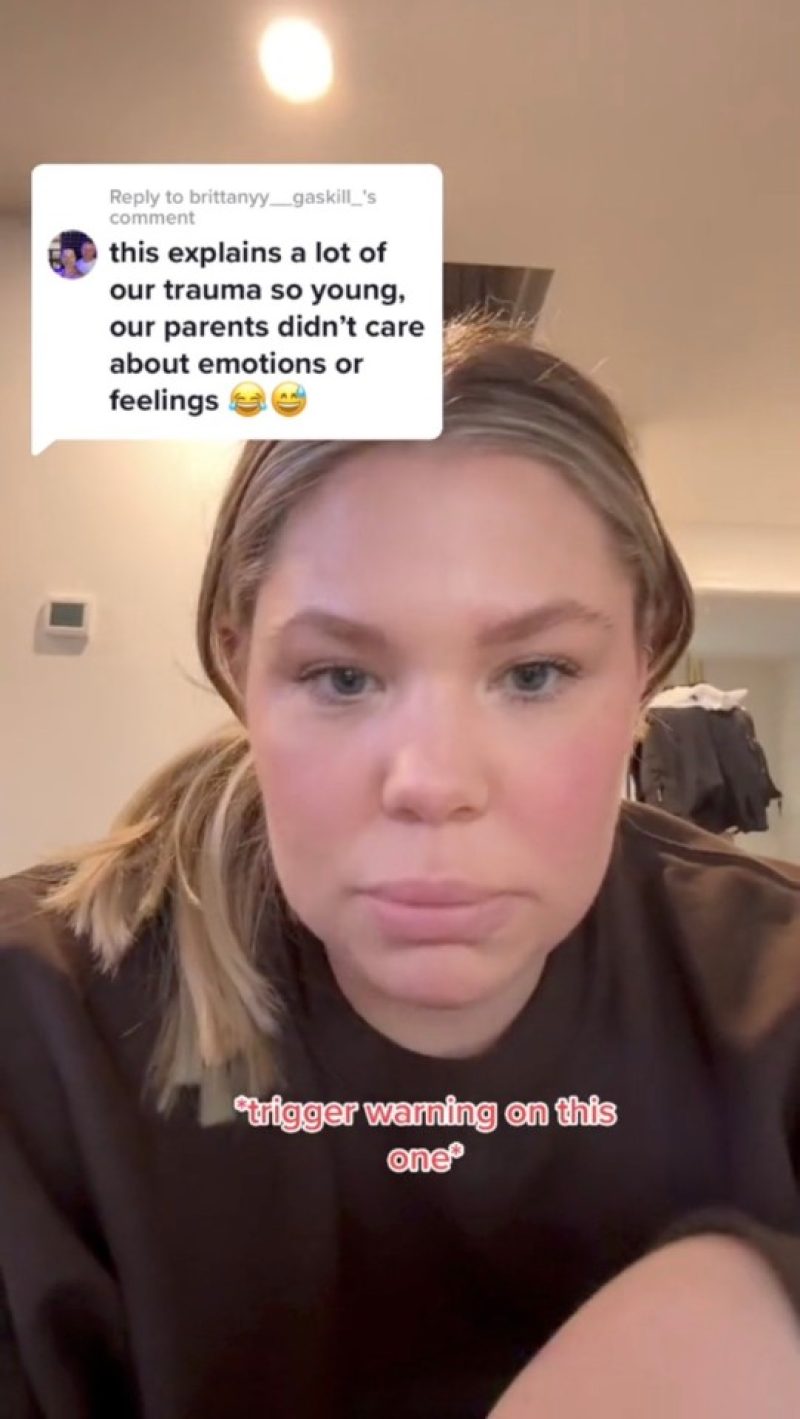 KAILYN Lowry has revealed a terrifying story on TikTok about a childhood trauma she experienced.

The Teen Mom personality, 31, claimed as a child, she once woke up with a strange man in her bed.

In the new TikTok that is described as a “trigger warning,” Kailyn said: “If ya’ll want a storytime on the time my mom was at work and I woke up to a strange man in the bed, let me know, um, there’s a lot more trauma where these TikTok’s came from.

“Um, so, just leave it in the comments and let me know,” she said.

Fans immediately responded, with one writing: “Yes do a story time if you’re comfortable with it! I’m loving these story times with you!”

Another wrote: “It just amazes me how amazing of a mom you turned out to be and how successful you are after you endured such trauma.”

“Girl, you’ve been through SO much&you’ve overcome SO much more with no family by your side. I’m proud of you!” another praised.

The video comes as the reality star recently opened up about another horrifying childhood experience involving her father.

In a series of TikTok videos, Kailyn told the story of when she was allegedly abducted as a six-month-old child.

Her parents, Suzi and Raymond at that point had split up, and Kailyn was once left at home sick while her mother went to work.

While her father was supposed to take the young Kailyn to the doctor, he instead allegedly took his daughter from Pennsylvania to his home state of Texas.

“He decided to pick up and leave and take me to Texas and nobody was there to find me,” Kailyn recalled.

She revealed that she then ended up in the hospital with pneumonia, while her mom had used legal support to get her back.

The scary incident also settled the custody dispute between Raymond and Suzi, who was struggling with addiction issues.

“She gets to Texas, she gets me, and that’s when the judge ultimately grants her to go to rehab, she can retain custody of me and that’s that.”

While recalling her story, Kailyn also mentioned that her father’s sister had been trying to locate her since she was born.

“She essentially loved me like one of her own children,” she recalled.

After they connected via Facebook, the aunt then put her in touch with her dad, and 16 & Pregnant viewers will recall the first time Raymond met his 17-year-old daughter on camera.

“It was a very humbling experience for me to meet him, it was something I needed to do for myself,” she reflected.

However, Kailyn did not get to make many happy memories with her father, whom she is no longer in touch with.

“As soon as I got to his house I wanted to leave and he asked to borrow 20 bucks,” she said.

In a tweet, Kailyn confirmed that she had not seen Raymond before Thanksgiving week 2009.

Since that week, Kailyn has also confirmed she has had no contact with him since.

While Kailyn’s troubles have been the topic of much discussion on Teen Mom, Raymond has not been quiet about it.

Raymond has taken to social media in the past and complained about his representation on the show, finding it to make him look it bad.

“No, that’s a f***ing joke. Don’t even start this s***,” replied Kailyn, “You haven’t been around or tried with either of us nor paid child support so get the f*** outta here.”

Along with her father, Kailyn’s relationship with her mother, Suzi Irwin, has been just as troubled and storied.

As recently as 2018, Kailyn confirmed that she has not had any contact with either of her parents.